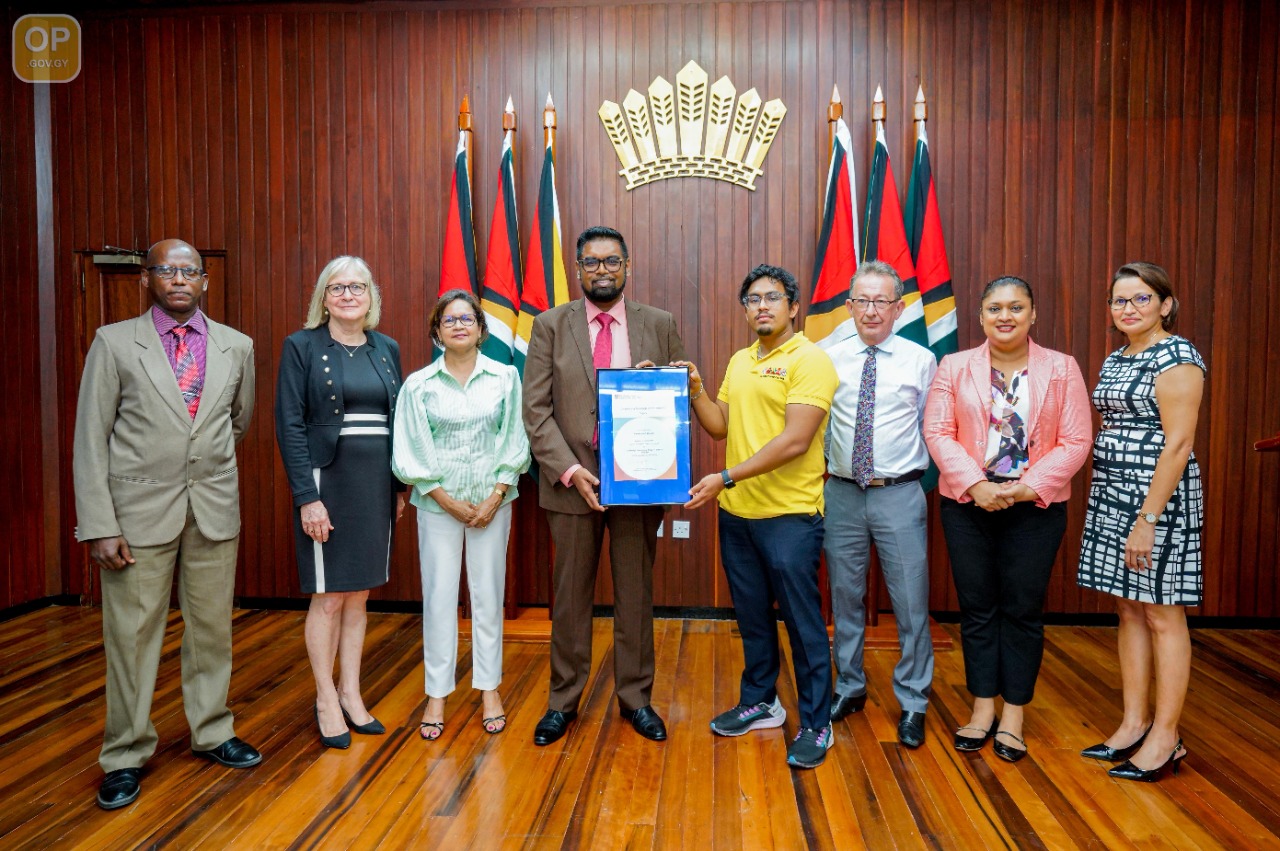 Georgetown, Guyana—(April 06, 2022) His Excellency Dr Irfaan Ali said that Guyana’s education system will work harder to create a conducive atmosphere to produce brilliant young minds that are innovative and visionary.

He made the statement during a simple ceremony at the Office of the President today, which was held in honour of School of the Nations’ student John McGrath, who was officially presented with the Cambridge Learners Award.

The 17-year-old was awarded the prize and title of the World’s Top Student for Cambridge International Advanced Subsidiary (AS) English Language after he was able to secure 99 marks out of 100 in the June 2021 Examinations.

He is also the first Guyanese to top a Cambridge AS examination.

The Head of State told McGrath that he is looking forward to his development and would like, in the future, to see his name beside “global articles and writings that are celebrated”.

The sixth form student’s result was better than over a million students from across 136 countries.

“And that is where our education system is going—creating educated minds that can be analytical, can be innovative, can be visionary.”

“So, now, Mr  McGrath, we have a writer among us in Guyana who can write brilliantly about what we offer as a country.”

President Ali took the opportunity to laud Nations (which also has a tertiary arm) and pointed out that recently, the Government of Guyana and the school have collaborated on a number of initiatives involving different government agencies.

He said that the results so far have been good and that the Government is “looking to expand our partnership with the private sector [and] private institutions”.

“I always felt that the ability to offer beyond secondary education—university education—in an environment in which people can still pursue a career and work, is one that has untold benefits, and the range of universities that you have a relationship with is also extraordinary.”

Like his father, Sean McGrath, who has contributed to the development of Guyana’s tourism industry, John also has aspirations to further his studies in the field.

The President told the young man that tourism is a very viable option for Guyana at this stage in its development.

He emphasised that the tourism sector is one that is essential for the development of Guyana and said that there are “many opportunities for you to pursue this interest here”.

President Ali also implored McGrath to not allow his accomplishment to be a singular celebration but to be a motivation to others.

“And the only person who can do that is yourself. So I would like to see how you would go back to those in Nations and across the country in motivating them to accomplish as you have accomplished.”

The Minister of Education, the Honourable PriyaManickchand, also remarked on the teenager’s achievements.

“Guyana takes particular pleasure in owning you and celebrating you because this is the first time that we have, as a citizen, topped the world in any field in the Cambridge AS awards.”

President Ali was also joined by the Minister of Housing and Water, the Honourable Collin Croal and representatives from Nations.