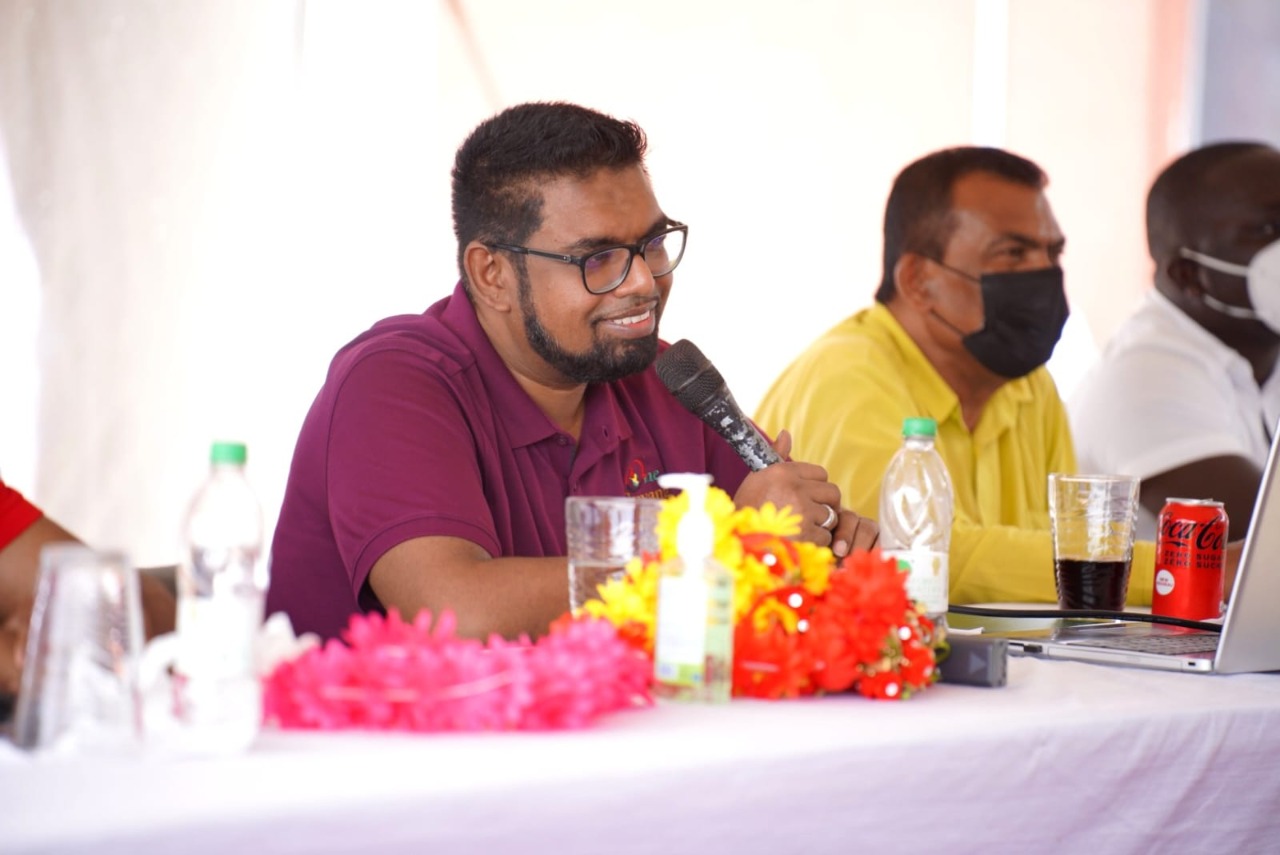 Georgetown, Guyana—(March 29, 2022) His Excellency Dr Irfaan Ali said that his Government is initiating a wide range of transformative initiatives in the agriculture sector to ensure its resilience and sustainability.

He pointed out that Guyana’s agriculture is not just critical to the country’s future, but to the region and to the international community.

“I’m here on a very simple mission, and that mission has to do with a vision of making Guyana not only the food basket of the region but more importantly, building a framework that will ensure that we produce the greatest levels of productivity, we use the best available technology, we bring international partners to the development of our agriculture and food system in this country.”

The President highlighted the importance of producing locally, while speaking at the Government’s latest initiative, the Black Belly Sheep Project, which was launched on Sunday at the Mahaica-Mahaicony-AbaryAgricultural Development Authority (MMA-ADA) in Onverwagt, West Coast Berbice.

At the event, he said that the mutton initiative is one of several aimed at ensuring that Guyana becomes self-sufficient and agriculturally versatile.

He explained that the Government will soon be launching another programme, this time, to further bolster the local poultry industry.

“We started by working with all the large poultry producers in a consortium for them to produce their own corn and soya for the production of feed to support that industry…we are now looking at a project that will enable us to produce our hatching eggs all here in Guyana, locally.”

He informed the residents of the initiative to be implemented in Pakuri Village (Mahaica River), which will see a collaboration between the private sector, the Government and the indigenous community to ensure that eggs are produced for local consumption and eventually for export markets in the region.

In addition, the Head of State also pointed to the swamp shrimp project for the diaspora market, which is being executed on the Corentyne coast in the East Berbice region.

He said that since the inception of this project, production has doubled in less than a year. The existing market, he added, is creating incentives for supporting farmers.

Guyana is strengthening relations with several islands in the region, including Barbados, Antigua, Jamaica and St Lucia and mutually beneficial projects are expected.

“Already we are seeing tremendous progress in our relationship with Barbados, for example where very soon we will be turning the sod for a Guyana-Barbados food terminal….We’ve already expressed our unwavering commitment to the removal of every barrier that will prevent trade between the two countries.”

On the international front, President Ali announced that a team from West Jet Cargo that he met in the UAE will be visiting Guyana shortly to look at adding a cargo facility for direct export to North America.

“These are all initiatives that we are fast-tracking and we are going after in a very aggressive manner.”

He also stressed the importance of partnerships at the local level to meet the demands, especially when it comes to reducing our food import bill by 25% by 2025.

At the regional level, the Agri Investment Forum (May 19-24) will help to solidify the regional approach, especially since all the major players in the region from the distribution chain, the trading arm, the banking institutions along with global players are expected to attend.

Message byHis Excellency Dr Mohamed Irfaan Ali,President of the Co-operative Republic of Guyana on the occasion of Ramadan 2022