Region Five must be the livestock capital of CARICOM—President Ali 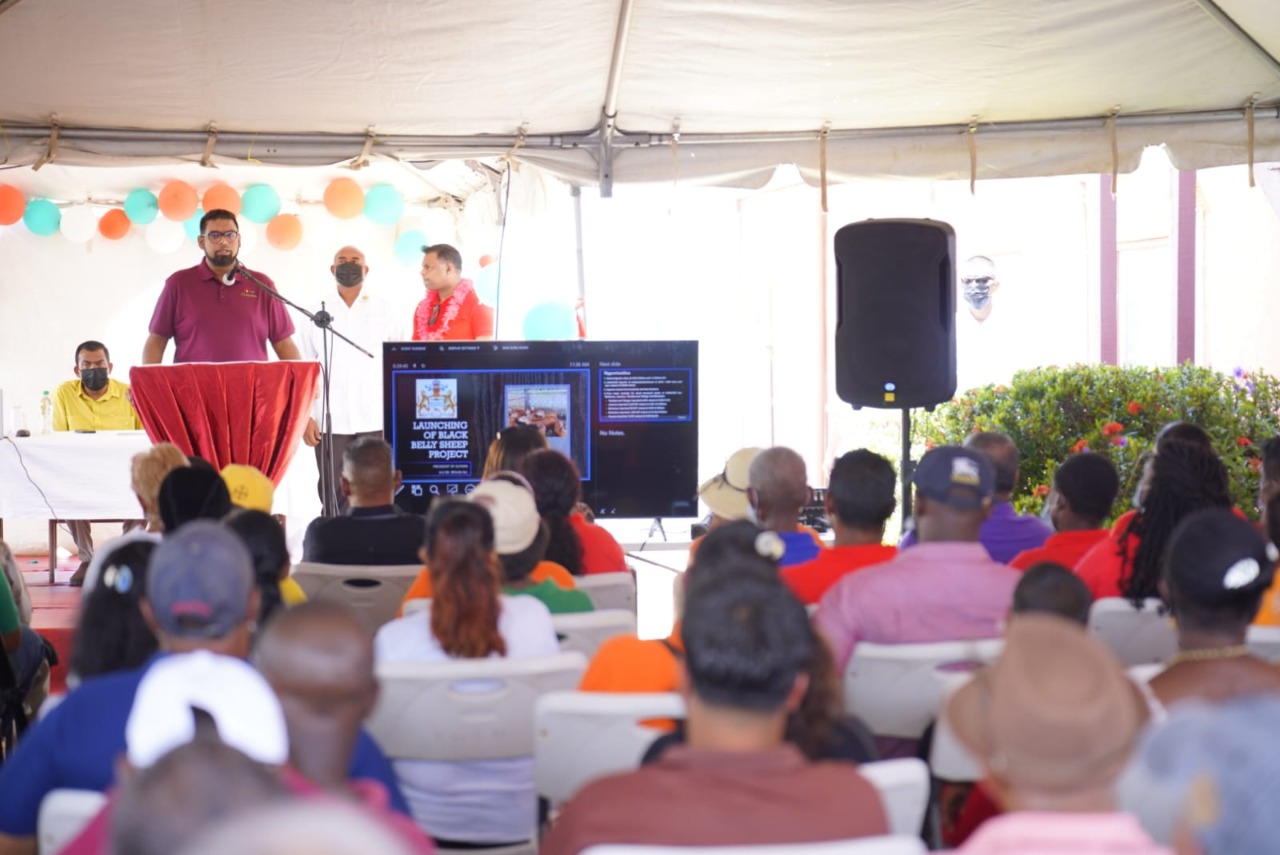 Berbice, Guyana—(March 27, 2022) His Excellency Dr Irfaan Ali today announced that his Government’s vision is to make Region Five (Mahaica-Berbice) the livestock capital of CARICOM as Guyana continues to leadagricultural development and food security at the Regional level.

To achieve this, the Head of State pointed to the need to increase production, quality, technology and infrastructure.

He gave assurance that the process has begun while launching the Black Belly Sheep Project at the Mahaica-Mahaicony-Abary Agricultural Development Authority (MMA-ADA) in Onverwagt, West Coast Berbice.

The project, which would aid Region Five (Mahaica-Berbice) farmers and bolstered its ruminant industry, has a special focus on women and youth development.

The Head of State was clear that the venture, which has so far attracted 80 farmers with land, must be led by at least 20 per cent female farmers with at least 35 per cent youth involvement (farmers 35-years-and-under).

“This is part of building the future. This is part of empowerment. These are real targets and a real approach in the involvement of people.  Not only must agriculture be about food production, it must be built on erasing biases. Agriculture must demonstrate that it has the ability to create an equal society.”

The President said that although it will take some amount of investment and effort to advance the project, it is a “low-hanging fruit” with tremendous potential.

He said that Guyana imports approximately 18 metric tons of mutton annually, which costs roughly US$130,000. This market will be absorbed by Region Five, while significant attention will be placed on the regional markets and, in due time, the international market.

The CARICOM market, according to the President, is worth approximately US$48M with 7900 metric tons imported annually from Australia and New Zealand.

The idea, according to the President, is to build capacity to ensure that within the next five years, Guyana is producing enough mutton to supply most of the region’s needs.

He listed Trinidad and Tobago, Jamaica, the Bahamas and Barbados as the region’s top consumers of mutton and mutton products and spoke of the importance of getting into those markets.

Barbados, he said, is already on board. A joint project between the sister nations will see Guyana supplying Barbados with mutton.

Although the black belly sheep, originally cross-bred on the island, is native to Barbados, space and other logisticalissues have resulted in the island importing approximately 1000 metric tons annually, at a cost of US$6.8M for its residents and tourists.

To kick-start the Black Belly Sheep Project in Region Five, 1000 breeding black belly sheep will arrive from Barbados in the next two weeks.

The Government will lend great support to the initiative, but farmers are tasked with ensuring that their lands have the needed grass for the animals.

“I want to assure you that we in the Government will be side by side with you on this journey.”

Barbados is one of a number of nations that are interested in Guyana’s agricultural potential.  The President said that his recent visit to the UAE focused on agriculture and the importance of food security.

He noted that three of the largest State-backed establishments in agriculture/food production, the Emirates Future Group, the Al Dahra Group and Elite Group, have indicated their interest in Guyana.

He said that neighbouring Brazil is one of the largest exporters to that region and that Guyana is also looking to get into the markets.

“We have all the competitive advantages here. It is now catalysing it into action and bringing it to the fore so that the benefits can rebound to the country.”

The President also spoke about plans to create a large-scale poultry hatchery and egg production project in Pakuri Village and other initiatives, including swamp shrimps, to help grow all facets of agriculture in Guyana.