GWI, GPL will not increase tariffs by a cent- President Ali 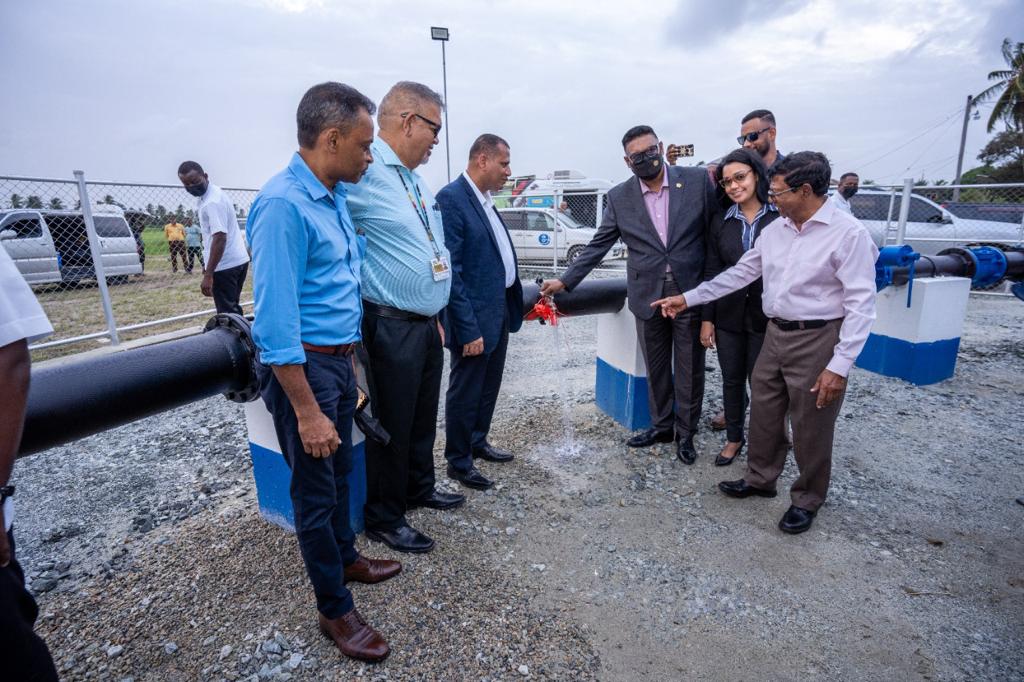 Georgetown, Guyana—(March 16, 2022) His Excellency Dr Irfaan Ali has given his assurance that despite the global increase in energy costs, his Government will continue to “fill the gap” to ensure that the burden is not passed on to citizens.

He said that this will be done although prices for fuel, which is the main impetus for the production of power and treated water, has increased by 100%.

“We said to both entities; you are not going to increase by a cent. The Government will take up the additional expenditure and fill the gap. That is how a responsible government operates.”

The Head of State gave this assurance during the commissioning of a new well station at Lusignan on the East Coast of Demerara on Tuesday afternoon.

He noted that when the Guyana Water Incorporated (GWI) and the Guyana Power and Light (GPL) budgeted, they did so with oil at US$60 per barrel and not at $125.

The President also reminded that it was his Government that removed the Value Added Tax on water for all categories of citizens, reinstated the water subsidy for pensioners, and reduced the water tariffs across all categories by five per cent.

“There is no government globally, and I say categorically, in this crisis that has moved to such directions.”

The President said that his Government has been able to keep all public servants employed and have even e employment opportunities. He noted that increases in salaries, pension and funds to students have also been distributed, even as the Government embarks on a massive infrastructure transformation, which is critically needed in Guyana.

“Sometimes we take these things for granted because the Government can be so responsive and responsible.”

The Head of State said that by 2025 more than half the world’s population will be living in water-stressed circumstances. As such, he pointed to the significance of the $141m facility at Lusignan, which is expected to benefit some 22,000 residents of Grassfield, Lusignan Pasture, Lusignan East, Lusignan West, Annandale and Courbane Park.

“As we meet today, 785 million people lack basic drinking water service globally. 144m people depend on surface water to carry out their daily lives. Two billion people globally use water that is contaminated in some way or form. This contamination has led, and continues to lead to many different types of diseases…This is the context in which we must position this accomplishment….”

He reminded that since his Government returned to office, $6.2b has been spent in the water sector, and over the next two years, $11b will be expended in this sector to ensure improved access to potable and treated water.

This expenditure, he said, will be used to ensure that by 2025 there is 100% access to good potable water and an efficient supply of water along the coast and in the riverine communities.

He also announced that the Government will be investing in more than 12 new water treatment plants all across the country.

The President reiterated his Government’s intention of realising the commitments made to citizens and families to build a resilient Guyana.

“So as we make these small but important steps, be assured of the continuous investment of the government into your lives, your family lives and your community life.”