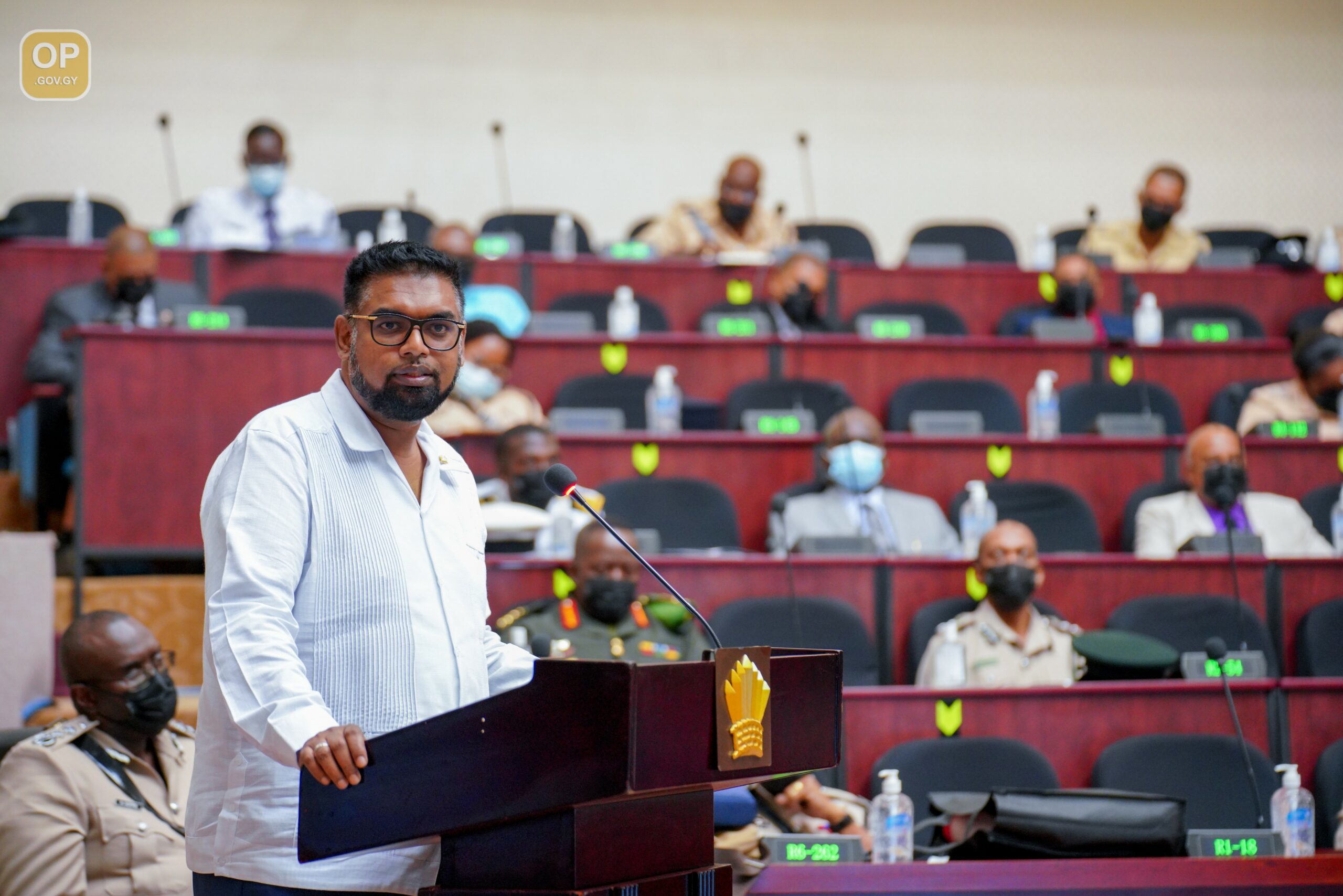 —Says Government will use technology to propel GPF to international standards

Georgetown, Guyana—(March 10, 2022) His Excellency Dr Irfaan Ali announced that Guyana is working on developing a police academy that will not only serve the country but the region by extension.

“…We are in detailed discussions with many of our partners about the development of a police academy, not only for Guyana but a regional police academy.”

The President and Commander-in-Chief of the Armed Forces also said that the Government will use technology and ICT to transform the Guyana Police Force’s capacity to carry out its mandate.

During his address today at the Annual Police Officers’ Conference at the Arthur Chung Conference Centre, he told participants to focus on the concepts of restructuring, reforming, repositioning, repurposing, reorienting and building a reliable Police Force.

The Head of State also said that the Government will enhance the Force’s investigative capacity to make it easier for detectives to solve crimes. He said that it is his Administration’s intention to modernise the Force’s crime-fighting capabilities to align them with international best practices and standards.

To help the lawmen achieve a more strategic approach, the Government would launch, through the University of Guyana, an internationally accredited master’s programme on strategic development studies that will be supported by the United States of America.

President Ali also noted that technology has the potential to be a game-changer in policing. This, he explained, is evident from the positive impact that CCTV cameras have had on crime-fighting.

“The police have been able to utilise footage – often from private businesses and homes – to help detect crime and to identify those involved in carrying out criminal activities.”

As a result, the Government has allocated $2.5b to not only resuscitate but to expand the Safe City Programme to the entire country.

Information technology will also be used to assist police planners to better map crime and utilise analytics as a crime-fighting tool.

President Ali explained that technologies such as facial and vehicular license plate recognition will be used to help Police intercept lawbreakers. Technological improvements will also be deployed to improve the safety on the roadways to reduce its “reckless use”.

“We cannot continue to lose our precious human resources to preventable road accidents. Our roads are for moving people safely around. They are not racing circuits or local remakes of the Fast and the Furious.”

Technologies such as fixed speed radars on the main carriageways to identify and photograph persons who use the roads recklessly will be used.

“This will be a costly investment but one that is absolutely essential to stem road carnage.”

The President pointed out that “boots on the ground” policing is becoming obsolete and that the new dimension of “eyes on you” policing and monitoring and intelligence gathering will be focused on.

Also in the pipeline is a pilot study for digital reporting booths, to be placed in strategic areas so persons can write their own statements and make anonymous reports.

The use of a digital platform for ticketing will also be explored and incorporated into the new highways that will be built. Infractions such as seat belt violations and others will also be incorporated.

He emphasised that information-sharing platforms have to be improved so that there can be more efficiency.

The President said that he has also instructed the Minister of Home Affairs, the Honourable Robeson Benn, to develop a policy on incentive-based performance that is linked to rewarding the Force.

“We have seen how this has helped in countries like Rwanda, it has changed dramatically the image of law enforcement entity, and it has brought results.”

Another one of the areas that have to be focused on, the President said, is the issue of driving under the influence.   He mentioned the idea of “burden-sharing” and referenced Canadian bartenders and their responsibility to monitor the consumption of their driving customers.

He said that the burden-sharing system must not only be built but must become ingrained in the Guyanese culture.

“There are already best practices globally, and we must all agree that this is a problem and it is a serious problem and sometimes we do not understand the magnitude of the problem and how we are personally affected; but as President, I have to communicate with people who go through this pain. And it is one of the most painful experiences and conversations you ever have to have. So I want us to examine that as part of the modernisation process.”

President Ali emphasised that the Government will invest in the Force and the people of the country “to ensure that they feel a part of what is happening”.

This year’s three-day conference is being held under the theme, “Promoting Improvement of Public Trust and Confidence, Maintaining Safety and Security through Competence, Professionalism and Partnership”.