Guyana to receive €7.56m from the European Union—President Ali 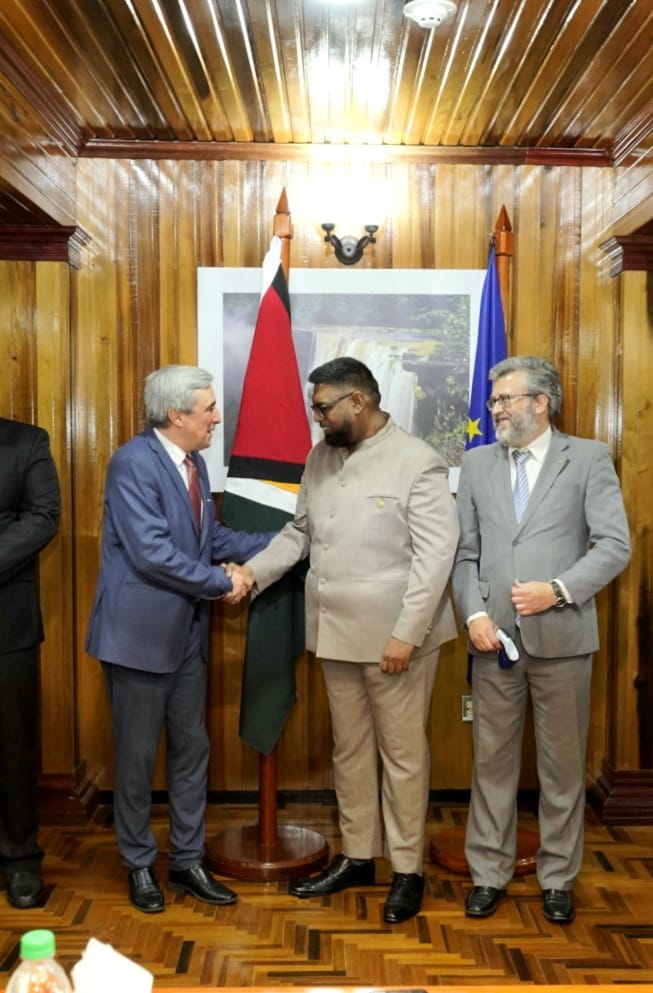 Georgetown, Guyana—(December 14, 2021) His Excellency Dr Irfaan Ali today announced that Guyana will be receiving €7.56m (G$1.77bn) from the European Union as part of its Budget Support Programme.

The Head of State, after meeting with a delegation from the EU’s External Action Service (EEAS), led by its Deputy Managing Director for the Americas, Mr Javier Nino Perez, also disclosed that the two parties had extensive talks on numerous areas for cooperation.

The announcement was made via a joint press conference between President Ali and the EU representatives.

The disbursement, the President noted, represents the last tranche of Guyana’s Budget Support programme with the EU and is indicative of the decades-old EU-Guyana partnership.

He said that it also speaks to Government’s “strong commitment to ensuring we work within the framework as approved by the European Union”.

The EU has remained one of Guyana’s largest providers of grant resources towards development programmes.

The President said that this support culminated in the funding of Guyana’s multiannual sugar programme that followed the end of the country’s sugar protocol with Europe, which saw the loss of the preferential market for sugar.

President Ali explained that a multiannual arrangement was then reached, whereby the EU supported the country’s development agenda through budgetary funding in various sectors such as climate adaptation and infrastructure—with a large portion going towards sea defences and the housing sector, among other areas.

He said that Guyana appreciates the “significant assistance” it has received from the EU over the years.

“I take this opportunity to highlight the strong support, and partnership with the European Union that we have forged, in the rebuilding of our fragile sea and river defences. The Guyana Shore Zone Management Programme targeted the reconstruction of several kilometres of our severely deteriorated sea defence systems along the coastline to protect low-lying areas which are prone to flooding during high tide.”

As a result of this intervention, the President said, thousands of acres of arable agricultural lands under cultivation are protected from the intrusion of the sea.

He added that the resources that are now being provided will “greatly assist in improving the lives of the people of Guyana and will help to offset the expenditure that has been incurred in our relentless struggle to defend our coastal zone from the intrusion of the aggressive Atlantic Ocean”.

President Ali was joined by several senior members of his cabinet, including Prime Minister, Brigadier (Ret’d), the Honourable Mark Phillips and Vice President, the Honourable Dr Bharrat Jagdeo, for the discussions.

He said that that the high-level government team, which included a number of Ministers, had an extensive discussion with Mr Perez on various areas, including ways to improve the competitiveness of Guyana, the country’s plans to diversify its economy and making the traditional sectors competitive, and Guyana’s role in the regional integration process.

“We discussed areas surrounding governance, improvement in the various arms that constitute the State, electoral reforms, ways in which the EU can support us in strengthening democracy, and importantly, working with the EU as close partners in championing Guyana’s cause, in partnering with the EU, in promoting joint collaboration for our private sector, in looking at the political and governance level, and seeking support from the European Union in strengthening our political and governance systems.”

The Head of State pointed out that the discussion also encompassed how Guyana can engage the EU to support its continued modernisation of its financial sector and how the EU can support Guyana’s anti-corruption framework from a legislative, institutional and transactional perspective.

The President also noted that they were able to have fruitful discussions on a comprehensive plan and framework that seeks to have further collaboration between the EU and Guyana and to strengthen and expand the relationship.

The expansion plans also include the private sector as part of the stakeholder’s component.

It was also announced that Guyana and the EU have set an actionable timetable that they will seek to implement in the coming years—a timeline that would define their new strategic relationship.

“Our country is changing, and with that comes different dimensions in the management of relationships with international agencies like the European Union, and we have had the opportunity to discuss some of the challenges that can come our way and how we will mitigate and manage those challenges together.”

Mr Perez also gave brief remarks and stated that he comes with a message of hope and commitment.

He said that the EU wants to be partners and “political friends” with Guyana since they both face similar challenges and have faith in the same principles and objectives.

“There’s a lot we have in common, historically, linguistically, socially, but as I said, possibly the most important element of what we share is the belief in many fundamental elements that will be essential to confront the challenges of today’s world.”

EU’s Ambassador to Guyana, His Excellency Fernando Ponz Cantó, said that today’s meeting was a culmination of many efforts and the beginning of “something more” where Guyana and the EU can build a closer and more excellent relationship.

Ambassador Cantó also emphasised that the release of the budget support is proof of the EU’s trust in Guyana’s financial management practice and realisation of works.

“I am very proud to say that with this programme, which overall has been €30 million, you have managed to build more than 10 kilometres or almost 10 kilometres of sea defences.”

He also lauded the Government for maintaining almost 60km of sea defence and for the planting of six new mangrove sites.

Not only did the programme reap environmental success, but social success also with the involvement of Guyanese females.