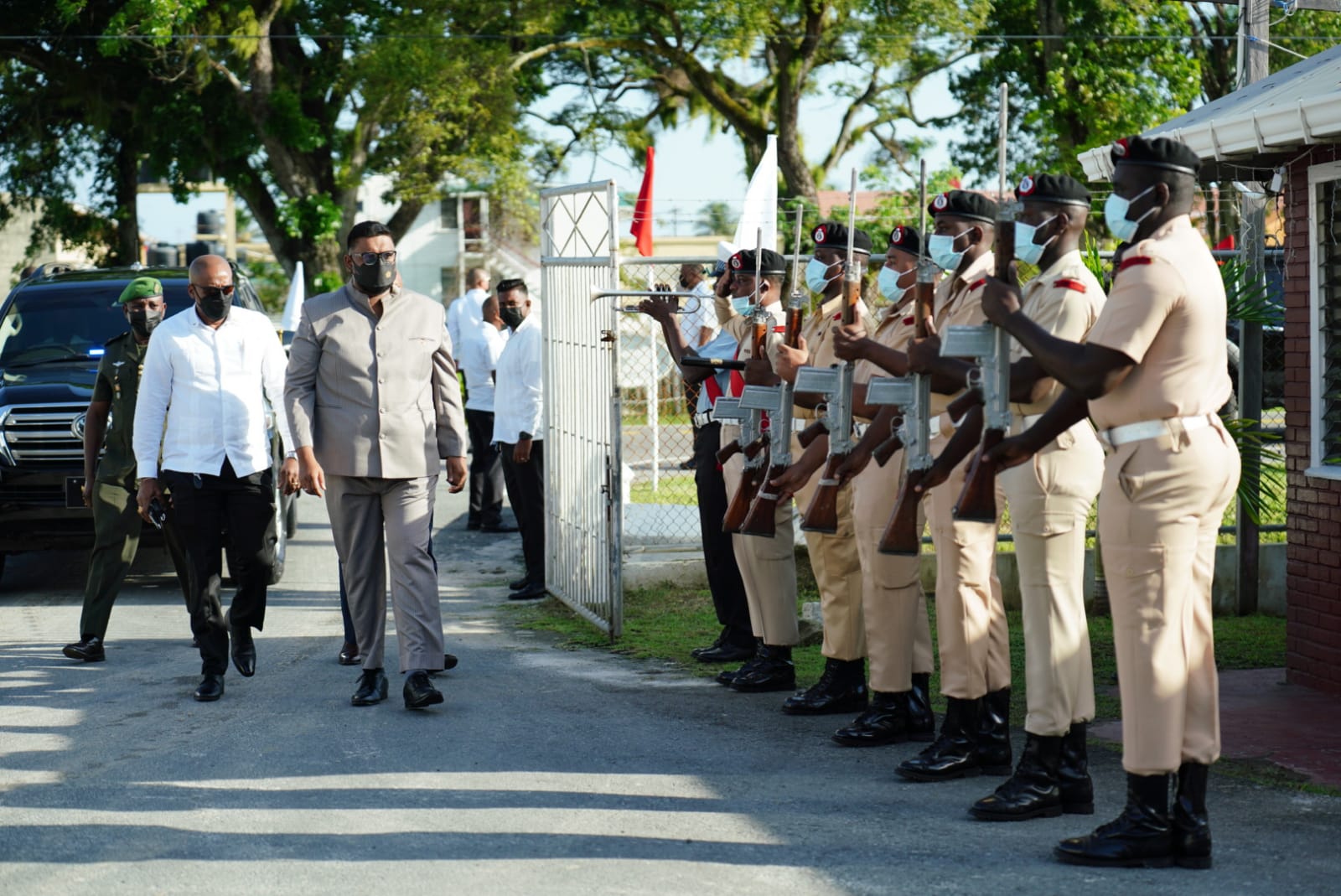 Georgetown, Guyana—(December 14, 2021) His Excellency Dr Irfaan Ali told high-level ranks from the Guyana Police Force (GPF) that they are integral to the development of the Government’s ‘One Guyana’ policy.

The Commander-in-Chief of the Armed Forces outlined the importance of the force in nation-building during his brief remarks at the GPF’s annual Christmas Breakfast at the Police Officers’ Mess in Eve Leary today.

“You are my greatest asset and ally in building this ‘One Guyana’. And we will do it. I want to assure all of you that it will come and it will come very soon.”

The lawmen were described as having attitudes and value systems that are patriotic and nationalistic.

The President said that eventually the people of Guyana will triumph above all obstacles and barriers and will join together as ‘One Guyana’ “where all of our people will be the brothers and sisters of each other” and move forward in harmony.

UPLIFTMENT OF THE GPF

The Head of State also reaffirmed his Government’s commitment to not only equip the force with the necessary tools and infrastructure to effectively fight crime but also to provide opportunities for ranks to improve their personal lives and by extension, the country.

President Ali explained that the joint forces will continue to lead by example.  He also said that the Guyana Defence Force will embark on a national enhancement programme to improve the medians across the country to enhance Guyana’s overall standards.

“As Commander-in-Chief I will be leading an effort with the army and we are going to include the Police Force in going out there and lead by example in the cleaning of this city to make it a point that the city and the cleanliness of our environment…is not a political matter. It is a matter that defines us as a people, that defines us as who we are.”

Officers stationed on Main Street for the Christmas light-up were praised for their “excellent policing” by the Head of State.  He said that the environment is encouraging and allows them to execute their duties with pride and respect.

President Ali explained the importance of the force understanding the development thrust of the Government. He said this will ensure that they formulate strategies in line with the country’s projected growth and execute their work with more efficiency and effectiveness. The Government will support the force in this development, by way of technological development.

He said that the new highway from Mandela Avenue to Diamond will have certain technological features, including speeding cameras that will be incorporated into the infrastructure to assist the lawmen.

Additionally, the Head of State noted that his Government would continue to equip the force with the necessary vehicles to execute their duties. He said that building on the Government’s supply of 50 new vehicles, 65 bikes and other assets to the force, a supplementary provision has been set aside for 50 more vehicles.

A commitment was also given to replace the engines on more than 20 vehicles, which are out of service, to get them back into working condition.

“There are some areas that we have to tweak. And we have to be bold in our decision making. We have to take a strategic look at our organisational structure or operational structure and come up with the best-suited model for a modern Guyana. That is why you are seeing legislative changes. We’re looking at a national drone programme”.

The President said that drones have already been deployed in the Force’s crime-fighting strategies in the City and there are also plans to utilise them on the country’s waterways as the first line of defence.

In addition to the capacity of the Force, the welfare of its officers, as it relates to working conditions and salaries, will continue to be addressed.

President Ali said this is why education is one of the most important pillars of the Government.

He said he has already spoken to the head of the police so that every branch or division commander can be sponsored by the government to pursue their educational goals in a degree programme. Those who already have degrees will be enrolled in a master’s programme for defence studies.

Guyana to receive €7.56m from the European Union—President Ali