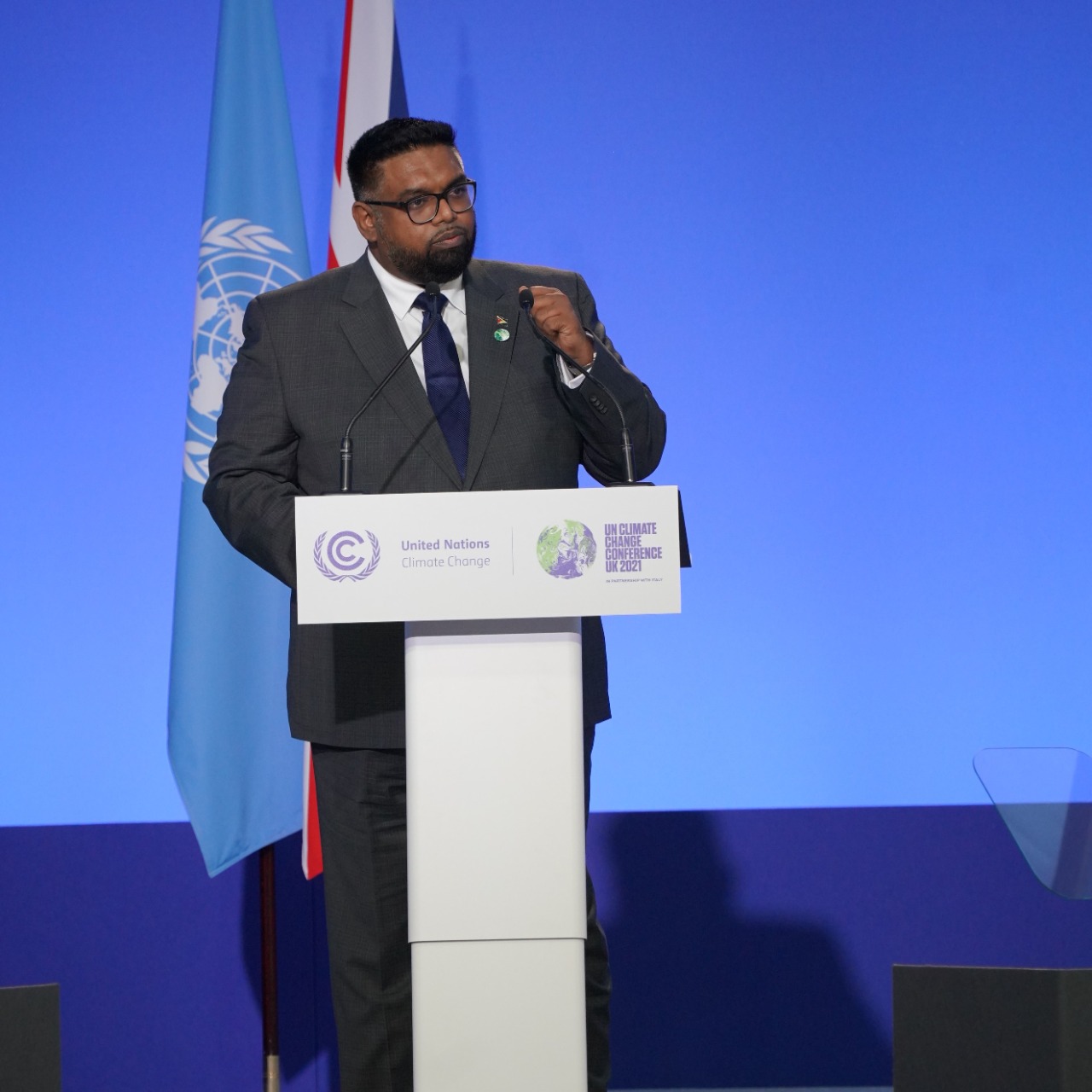 Glasgow, Scotland—(November 5, 2021) His Excellency Dr Irfaan Ali endorsed the Dhaka- Glasgow Declaration this week at a high-level side event at the UN Climate Change Conference of the Parties (COP) 26.

The Guyanese President stated that Small Island Developing States (SIDS) and Low-lying Coastal Countries, like Guyana, lack support and not ambition in their fight against climate change.

During his address to the Climate Vulnerable Fund (CVF), he underscored that SIDS and Low-Lying Coastal Countries are victims fighting to exist during the climate crisis.

“Many of us are already punching above our weight in response to the climate crisis. We are contributing the least to climate change, yet, we are making impactful contributions to mitigating the adverse effects of climate change through the ecosystem and climate services which our forests provide and through the de-carbonisation of our economies.”

The Head of State emphasised that these vulnerable countries are not lacking in ambition but is constrained by their ability to realise those ambitions. He said that this is even more evident by the adoption of the Dhaka-Glasgow Declaration, which shows SIDS and Low-lying Coastal Countries’ unambiguous manifestation of their commitment to realising those ambitions.

“The Glasgow- Dhaka Declaration is a proclamation of our commitment to being impactful in ending the climate crisis. I welcome it and endorse it.”

The ‘Declaration’ focuses on climate mitigation strategies, adaptation plans and financing for the world’s most vulnerable nations.

President Ali noted, however, that given the present barriers obstructing and constraining these countries from fully achieving their commitments and ambitions, more needs to be done at the global level.

“If these barriers persist, then they will derail our actionable timeline in achieving not only ours, but the global climate change targets.  This is why we have called for all the measures which are incorporated in the ‘Declaration’, including the Climate Emergency Pact and helping with climate prosperity plans to be implemented.”

The President pointed out that Guyana especially has experience of climate prosperity plans that date back to 2009 when it was among the first, as a developing country, to formulate a Low Carbon Development Strategy (LCDS). In a little over a decade, Guyana has been able to launch the consultative process aimed at expanding that strategy that will articulate the country’s vision to 2030.

In playing its part in fighting climate change, President Ali emphasised that Guyana will decarbonise its economy and will invest in a range of low carbon opportunities and jobs while maintaining its standing forest, which is almost as big as England and Scotland combined.

On Tuesday, more than 100 countries, including Guyana, representing 85% of the globe’s forested land, pledged to end or reduce deforestation by 2030.

President Ali told the CVF that the country’s expansive forest is a global asset.  It stores more than 20 gigatonnes of carbon, preserves priceless biodiversity and provides sustainable livelihoods for its people. As a result, the Government will continue to adopt an inclusive approach to the sustainable management of its forests, biodiversity and freshwater supplies.

“We will slash emissions further by transitioning towards cleaner sources of energy. Yes, we are vulnerable, but we are not helpless or without hope. We are taking decisive action to ramp up and realise these ambitions. But without the critical support – financial and technological – our best and noblest of ambitions will all flounder.”