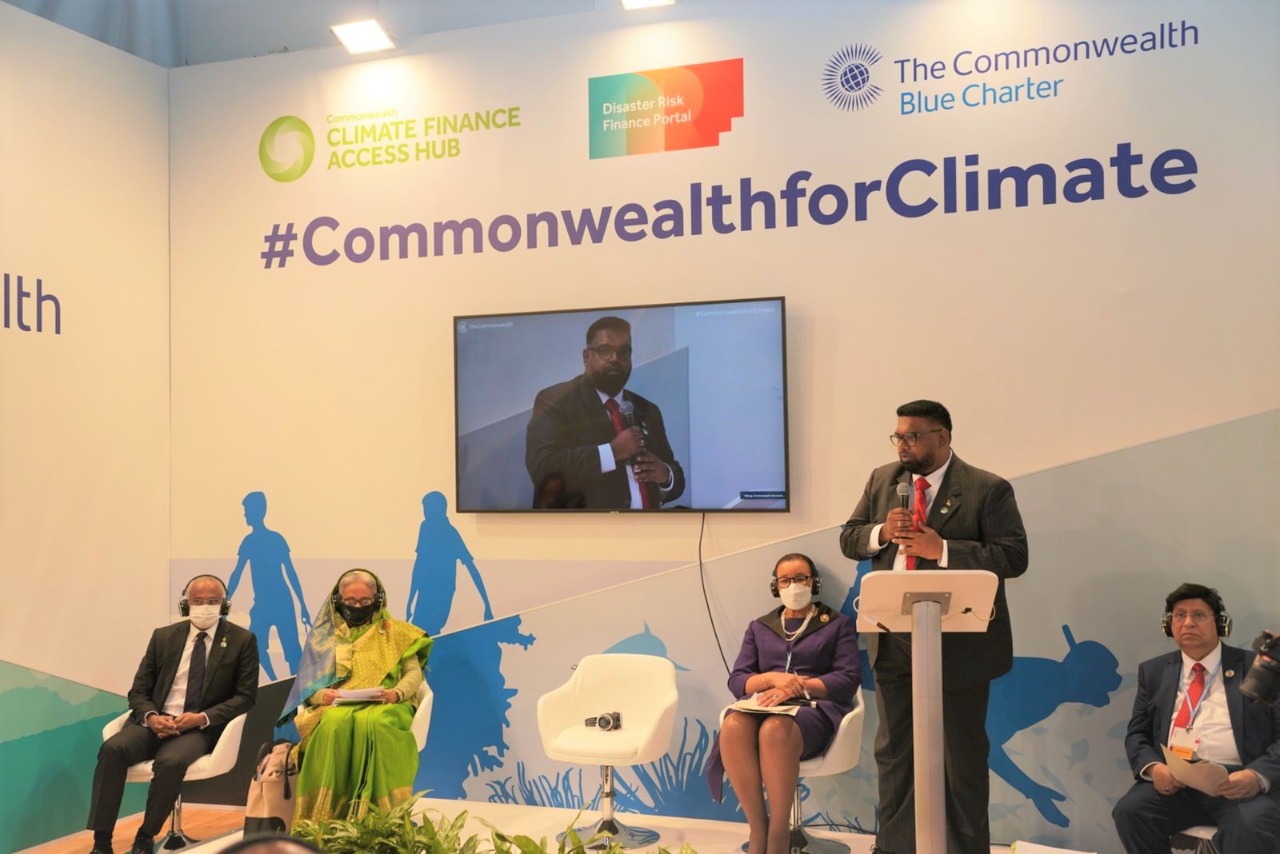 Glasgow, Scotland—(November 3, 2021) His Excellency Dr Irfaan Ali opined that the development of any national, regional or international climate plan must be comprehensive and inclusive.

The Head of State made the comment during his remarks at a high-level discussion to the Climate Vulnerable Forum— a voluntary, non-treaty intergovernmental organisation for vulnerable developing countries.

The side event at the United Nations Framework Convention on Climate Change (UNFCCC) Conference of the Parties (COP) 26 was organised by the Commonwealth and was chaired by Her Excellency Sheikh Hasina, Prime Minister of Bangladesh.

The President emphasised that no plan should assess climate change in isolation from food security, debt security, or national prosperity since climate change has a negative domino effect on development.

“We are faced with nothing new, but we are to make choices that will decide how well— or if we survive in the future. Climate change affects us all, but unfortunately for Small Island Developing States (SIDS) and Low-lying Coastal Countries, it affects us in a worse way.”

President Ali updated the group on Guyana’s Low Carbon Development Strategy (LCDS) and explained that it is a pathway that rests fundamentally on safeguarding the country’s standing forest while creating value and supporting the livelihoods of people through the implementation of development strategies.

The Head of State added that Guyana will be signing the declaration on forests. He explained that while reports would suggest that the declaration is starting from scratch, the conversation on forests has been going on “forever, and there are countries who would’ve started to implement a number of measures, and we cannot discard the progress we’ve made among those countries.

The President noted that Guyana looks forward to working with the global community on not only addressing the fundamental issues of climate change but, more importantly, addressing the issues of fairness in financing. He said that while there’s a lot of talk about private sector involvement, it should not take away the responsibility that the developed world has in terms of providing financing to vulnerable countries and the climate change agenda.

The Guyanese leader also noted that his country has been contributing significantly in the form of its standing forest that is as big as England and Scotland combined.

“We have in the past entered into a carbon credit agreement with the Kingdom of Norway—one of the largest per capita agreement but what we are seeing is the level of concern for standing forests or forests that are alive is not there, and this is something that we want to champion, and it is something that leads to prosperity.”