Coming decade must be a decade of decisive actions— President Ali 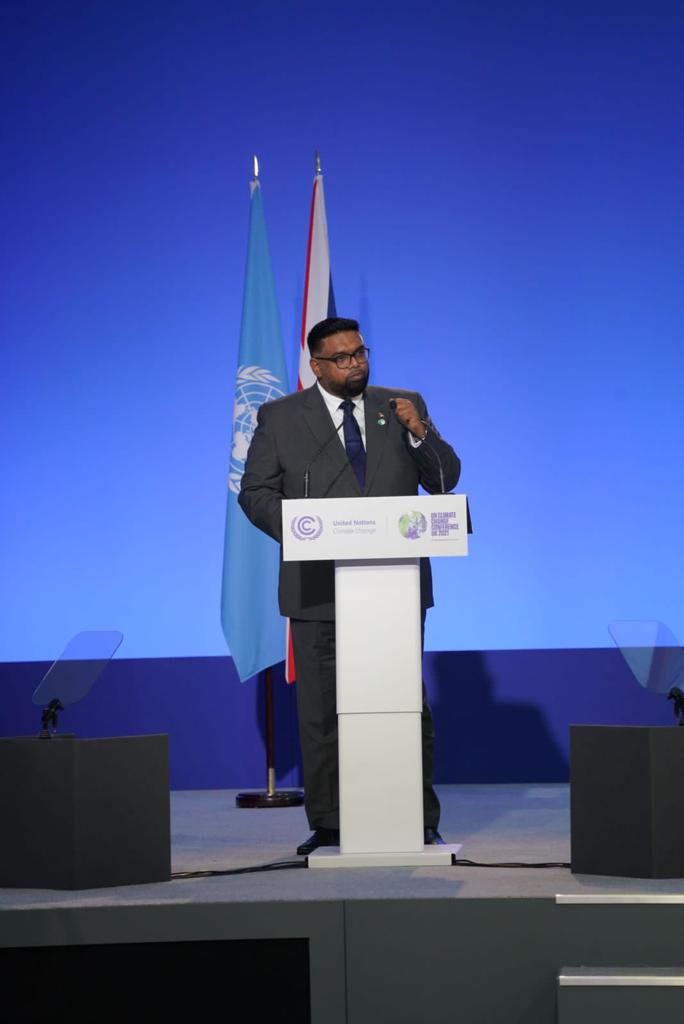 Glasgow, Scotland (November 2, 2021) His Excellency Dr Irfaan Ali called on leaders of the world to ensure that the coming decade will be a decade of decisive actions that will tackle the current climate crisis and change the world’s present trajectory.

President Ali made his passionate plea this morning at the  26th United Nations Climate Change Conference of the Parties (COP26), where he emphasised that the fate of civilisation resides in the decisions made in Glasgow, Scotland.

He said that the climate crisis has issued world leaders with an ultimatum to either take immediate and drastic action or subject themselves to an infernal global disaster.

“Indifference and inaction will be costly. Already, we are far behind in limiting temperature rise to 1.5 degrees Celsius. The coming decade, therefore, must be the decade of decisive action.”

Climate change, according to the President, does not discriminate. Still, its effects are more severe on the poorest and most vulnerable nations – especially Small Island Developing States (SIDS) and the Low-lying Coastal States.

“For us, it is a question of survival. We can use this Summit to change the present trajectory.”

“First, we must set more ambitious goals to reduce emissions, and we must honour, to the letter, those ambitions. All countries have an obligation to act, but the world’s foremost polluters have a greater duty to institute steeper emission cuts.”

Secondly, President Ali said that the pledge of US$100B per annum that was made a decade ago to support climate action must be met.

“Dishonoured pledges are a recipe for disaster.”

Thirdly, the Head of State said, forest-rich countries such as Guyana must be provided with the incentives necessary to keep their forests intact and to reduce deforestation and forest degradation.

“Mindful that deforestation contributes 16% to annual global emissions and in recognition of the ecosystem and climate services provided by forests, it is imperative that we finalise the rules for carbon markets and REDD+ so as to properly value tropical forests and the climate services which they provide.”

“We will maintain our forests – almost the size of England and Scotland combined, storing 20 gigatons of carbon – as a global asset. We will work with local communities in conserving, protecting and sustainably managing our forests, biodiversity and freshwater supplies.”

President Ali said that Guyana will also decouple economic growth and emissions through a progressively cleaner energy mix, with the aim of reducing the country’s carbon emissions by 70% in 2030.

He added that Guyana will also invest in low carbon opportunities for jobs, ecosystem services and social inclusion through an expanded Low Carbon Development Strategy.

“We are at a historic moment in our civilisation. History must not judge us as having only counted our losses.  It must instead herald our efforts to confront one of our Planet’s greatest threats—climate change.”

In this regard, President Ali posited that Guyana is prepared to work with the international community for collective action. He said that Guyana fully supports the position of CARICOM and are aligned with the Alliance for Small Island States (AOSIS), the Community of Latin America and Caribbean States (CELAC), the Leticia Pact, the DHAKA-Glasgow Declaration and the Glasgow Leaders’ Declaration on Forest and Land Use, among others.

“Though we recently became an oil producer, we support the removal of subsidies from fossil fuel production and advocate a strong global carbon price. Let future generations say – when it mattered the most, we made a difference.”