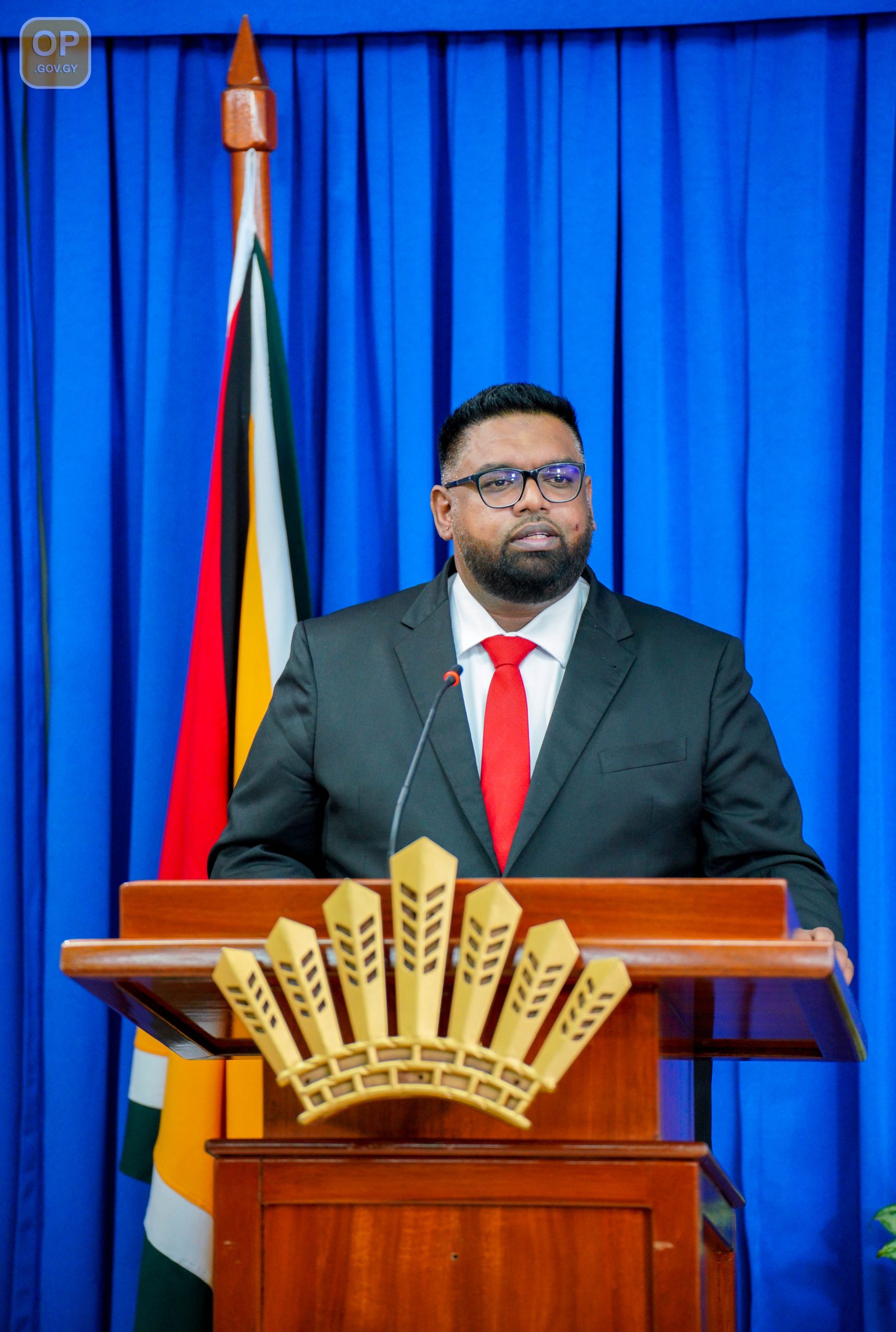 Georgetown, Guyana—(October 29, 2021) His Excellency Dr Irfaan Ali said that Guyana’s participation at the 26th United Nations Climate Change Conference of the Parties (COP26) will re-establish the country as a leading example for net carbon sink.

He also said that at the Conference next week, he will be presenting “realistic and achievable” targets in keeping with the country’s energy strategy and programme.

In his statement, the Head of State noted that along with highlighting the country’s net carbon sink, he intends to use the opportunity to promote Guyana among investors and major financial institutions.

“We intend to signal our commitment as every other nation that we all have a responsibility to climate change, but it must be differentiated. We will outline a realistic and achievable emission reduction ambition for Guyana.”

The President said that it is important to outline realistic and achievable targets because Guyanacannot criticise other countries for not sticking to their commitments while making goals that cannot be achieved.

The Head of State highlighted that Guyana’s targets and ambitions will be in keeping with its energy strategy and programme and the expanded Low Carbon Development Strategy (LCDS).

The President said that although Guyana will be participating at COP26 at the policy, political and technical levels, its focus will be on four themes.

These themes, he said, are (1) the country’s enhanced commitments on forests and land use, including reducing deforestation and accelerating forest restoration; (2) scaling finance and investment, including private sector finance; (3) sharing action towards sustainable production and consumption and (4) support for local people, and other stakeholders.

The President also noted that he intends to address other issues, including access to financing for mitigation and adaption for Small Island Developing States (SIDS), initiatives to strengthen and expand the market for the sale of carbon credits and renew calls to developed countries for the fulfilment of their $100 billion pledge.

GLASGOW DECLARATION ON FORESTS AND LAND USE ENDORSEMENT

The Head of State added that Guyana will endorse the Glasgow Declaration on Forests and Land Use which includes strengthening efforts for forest and ecosystems conservation and accelerated restoration; promoting the development of policies and strategies that foster sustainable development, reduce vulnerability, build resilience and enhance resilient rural livelihoods; promote greater investments in food security; create appropriate technology and infrastructure for hinterland communities and redesigning agricultural policies and programmes to incentivise investment and expansion.

COP26 is being held from October 31 – November 12,  2021. The COP26 summit will bring parties together to accelerate action towards the goals of the Paris Agreement and the UN Framework Convention on Climate Change.

Coming decade must be a decade of decisive actions— President Ali