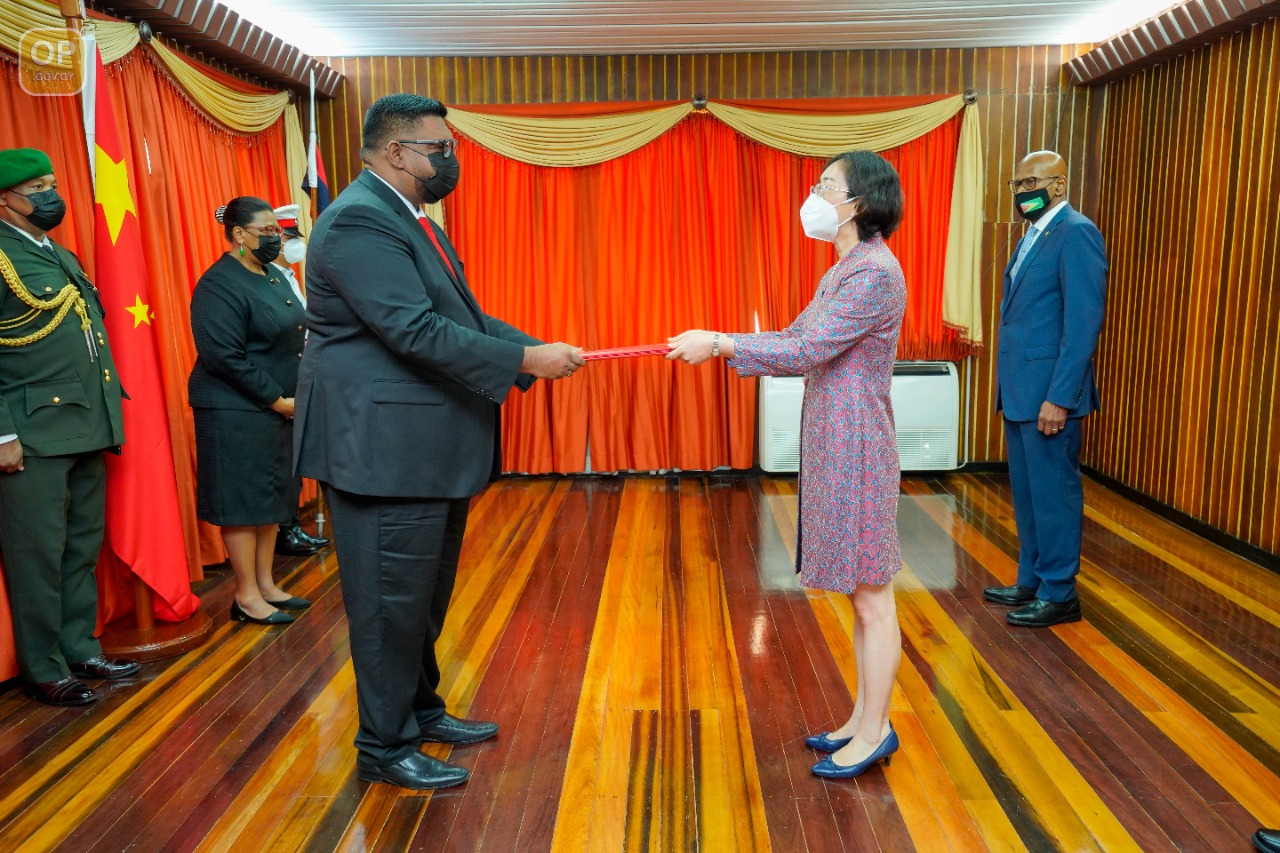 –         Accepts letters of credence from new Chinese Ambassador to Guyana

Georgetown, Guyana—(October 29, 2021) His Excellency Dr Irfaan Ali today accepted the letters of credence from the new Chinese Ambassador to Guyana, Her Excellency Guo Haiyan, and said that his Government is looking to build on the existing relationship between the two countries.

“Guyana looks forward to the continued advancement of bilateral cooperation between our states during your tenure, particularly in the areas of education, health, information communication technology, infrastructural development and trade.”

The simple ceremony was done at the Office of the President on Shiv Chanderpaul Drive.

The President added that Guyana also remains committed to working with the Government of the People’s Republic of China to promote high-level exchanges, strengthen strategic communication, and promote more cultural engagement between the two countries.

The Head of State pointed out that the countries have enjoyed “excellent relations” since the establishment of diplomatic ties on June 27, 1972—almost half a century ago.

He said that on the eve of the 50th anniversary of bilateral relations between the two states, Guyana is looking forward to marking the auspicious occasion in a significant manner.

The President also highlighted that Guyana has benefitted tangibly from its cooperation with China. The Head of State said that ongoing projects within the framework of the Belt and Road initiative, the extension of the Cheddi Jagan International Airport and the construction of a four-lane highway on the East Coast of Demerara are testimony to the benefits derived from the cooperation between the two states.

“China’s assistance is aligned with my government’s commitment to improving the lives of the citizens and enhancing the economic fortunes of the nation. This support is much appreciated.”

President Ali lauded China for its outstanding achievements in boosting social development as well as leading its citizens to overcome various difficulties and challenges, in addition to its enhanced global influence.

“Given the extraordinary circumstances faced by the global community due to the ongoing Covid-19 pandemic, my government applauds the leadership role taken by the People’s Republic of China, especially in the area of public health and in providing tangible assistance that has been crucial to Guyana’s preventative measure to combat the virus in Guyana.”

President Ali also noted that the two states have collaborated “very effectively” in the international arena, particularly within the Group of 77 and China in addressing the key issues of concern to developing nations such as climate change.