New culture of healthcare administration must be developed— President Ali 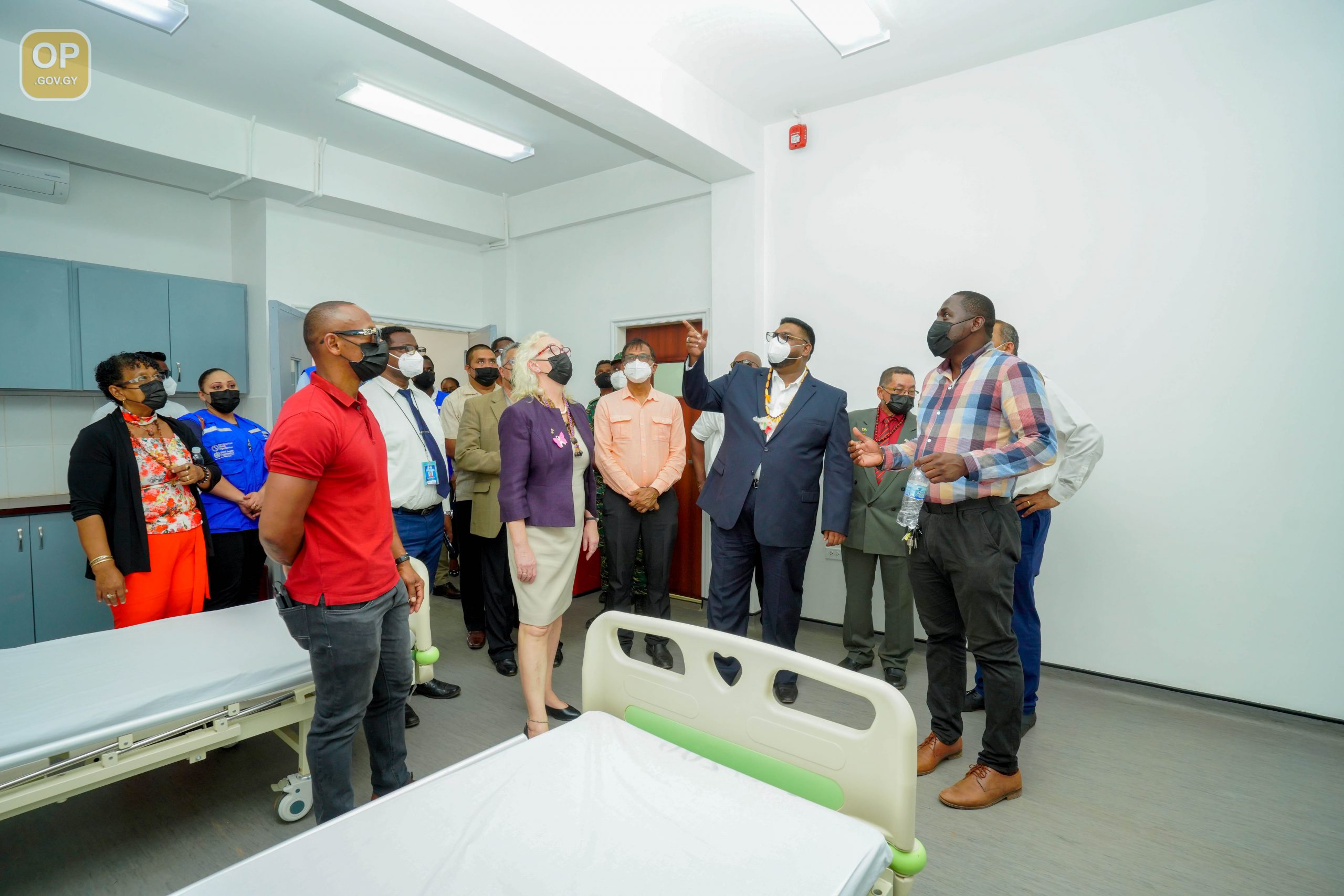 Lethem, Guyana—(October 15, 2021) His Excellency Dr Irfaan Ali assured residents of Lethem today that Region Nine’s healthcare and that of the entire country would continue to improve while pointing to the need for an enhanced administrative approach.

The President, who recommitted to providing first-world healthcare services throughout Guyana, highlighted the need for positive changes, especially with regards to patient care management.

He made these comments at the re-commissioning of the Lethem Regional Hospital, which was upgraded as part of the United Kingdom’s Department for International Development funded “Smart Healthcare Facilities in the Caribbean” project.

The upgrading and retrofitting of the Lethem Regional Hospital and the Diamond Diagnostic Centre and the soon-to-be-finished Leonora, Mabaruma and Paramakatoi hospitals are seen as needed “transition” by the President.

“When we speak about this transition, it also requires a smart approach to work. And this is where the human factor comes in. We have to develop a new culture and the way we administer health services.”

The President said that the cultural changes are not only applicable to doctors, nurses, and other medical staff but to all workers.

“So it is the integrated flow from the time you get to the hospital to when you are administered service. And I want to urge the management of the hospital to ensure that that flow and level of service is there.”

In addition to upgrading and retrofitting hospitals across the country, the President said that his Government is focused on upgrading all levels of healthcare in Guyana.  This will be done from the sub-regional level, the regional level and the national level.

President Ali explained that while his Government would continue to fully support primary healthcare, it will also allow private healthcare to flourish since this will enhance economic development.

He explained that the aim of the private healthcare system is to develop health tourism and become part of an international structure that will provide first-class healthcare services globally.

To increase their investments in the coming years, the President noted that the private healthcare providers will receive incentives.

The Head of State said that Guyana has received a number of proposals from across the world for the development of private healthcare facilities.

These include two local healthcare providers currently in discussions with global partners to merge their resources and develop a world-class healthcare facility; proposals from various countries, including a group from the USA interested in making a US$250M investment for tertiary healthcare; the British Government through financing from a British Private Arm and interest from the Austrian Government in building a Children and Maternity Hospital.

President Ali explained that with the expansion of the public healthcare system and the development of the private healthcare system, there will be a strain on the human resource capacity of the country.

He said that the Government is currently addressing this, and soon a training strategy will be developed and executed in all regions across the country for pharmacists, nurses, lab technicians, dental technicians and other needed workers.

“You can start planning your career because we are going to make the investment to ensure that your career and that the path that you’re taking is fulfilling…. “We have to train more than we need. So, we are going to invest in a massive training programme for nurses. Remember, we have to deal with primary healthcare and secondary healthcare, and then we will do an evaluation as to where the gaps are.”

The Government also has plans to build a new nursing school in Region Six that will be fully outfitted.

The Head of State noted that another important aspect of the healthcare system is the welfare of the professionals and how they are treated.

He said that the Government is aware of the needed improvements and will make necessary changes to enhance the living conditions of doctors and nurses.

On the cards for 2022 will be a specialised outfitted vehicle for Region Nine that would travel monthly from community to community, offering optimal health services. He said that this will allow the health system to implement a tracking mechanism called the Patient Management Information System that can be used by healthcare professionals to act on specific medical issues before they get worse.