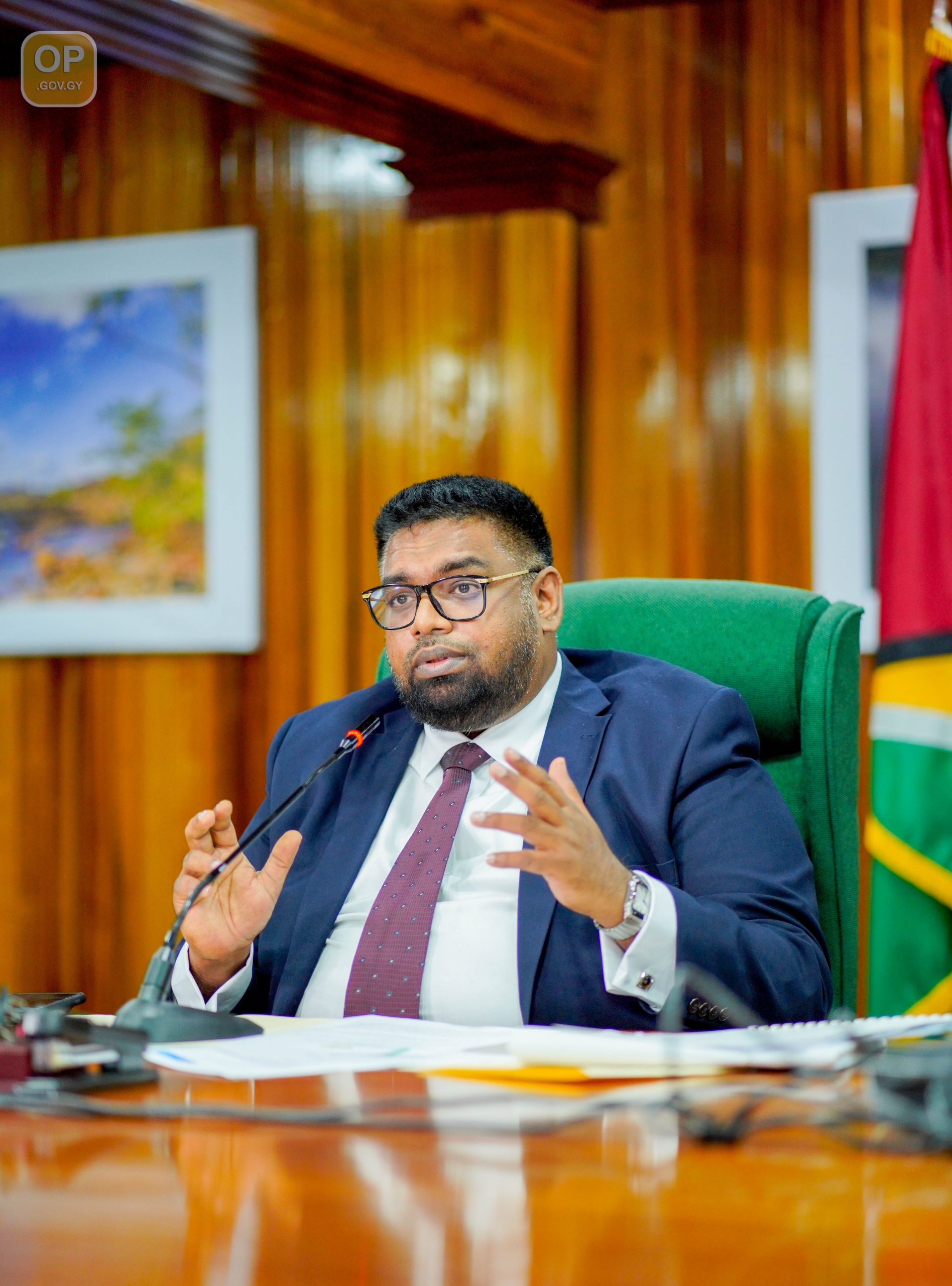 Georgetown, Guyana—(October 8, 2021) His Excellency Dr Irfaan Ali emphasised that protecting the Amazon’s rainforest is vital to the future of the planet and reaffirmed Guyana’s commitment to the Leticia Pact and its goals and objectives.

The President made the statements virtually at the third annual summit today from his Office on Shiv Chanderpaul Drive.

“The protection of our rainforest is vital to our future and that of the planet. We have an obligation to support regional environmental cooperation aimed at protecting our precious natural capital and in responding collectively to natural disasters which have regional impact.”

Today’s event, which attracted several heads of government, including the President of the Republic of Colombia, Ivan Duque Marquez, was held to reaffirm the principles and values of the treaty, which was signed by seven Amazon nations, including Guyana, in 2019 in the Amazonia city of Leticia, Colombia.

The Guyanese Head of State urged the summit to continue acting collectively in the face of threats that can harm the countries and the development of their citizens. He said that each country has an obligation to protect its respective rainforests for its citizens and for the global population due to Amazon countries’ oxygen-generating capabilities.

The Amazon is the largest rainforest block and carbon sink. It is home to 20% of the world’s freshwater supply and 10% of its biodiversity.

President Ali, who said that he was honoured to participate in the Summit, pledged Guyana’s commitment to the objectives of the pact and the country’s cooperation in implementing its action plan.

He said that the summit is being held at a critical time since the region is still facing the dire consequences of the COVID-19 pandemic, while attempting to recover from its effects.

“Our region has been making efforts to intensify regional cooperation so that never again will we find ourselves in a situation in which overdependence on the developed world for solutions to major global crises leave us vulnerable and exposed.”

The President noted that he is heartened by the level of regional cooperation that has been triggered by the global health crisis, and said he believes that equally, the participating countries can ensure greater regional environmental cooperation to help protect against the adverse effects of the global climate crisis.

“We, the countries of the Amazon, must play our part in averting environmental disasters and in arresting the climate crisis.”

President Ali lauded the Pact and its plan of action and said that they are instruments of regional environmental cooperation for combating deforestation, land degradation and for accelerating restoration, rehabilitation and reforestation initiatives.

He also praised the Pact’s commitment to the empowerment of women and indigenous peoples and their communities, which he said is vital to the conservation and protection of the rainforests and biodiversity.

However, he noted that the pact is still in its infancy since it was signed only two years ago and must be given time to achieve its ambitions and become an effective mechanism of environmental collaboration.

The President said that while the region’s current priority is to combat the effects of Covid-19, it should not deflect attention from the Pact’s objectives and the implementation of its action plan.

“The process of recovery from the pandemic should be used as an opportunity to align our economies along a sustainable development path and to ensure that preservation and protection is a foremost development priority.”

ALIGNING THE PACT WITH NATIONAL OBJECTIVES

The Head of State explained that environmental cooperation envisioned by the Pact might be short-lived or placed on a backburner unless the region’s development trajectories are aligned with the Pact’s objectives.

“Regional cooperation will enjoy greater success if its ambitions find increased traction in national development policies.” As such, the President said, Guyana believes that it is necessary for all the countries to support the objectives of the Leticia Pact for the Amazon by mainstreaming its objectives in their national development strategies, especially in relation to maintaining sustainable levels of deforestation, protecting biodiversity, enhancing value-added production of forest products, increasing the decarbonisation of each economy and empowering women and indigenous peoples and communities.”

President Ali message on the occasion of Navratri.