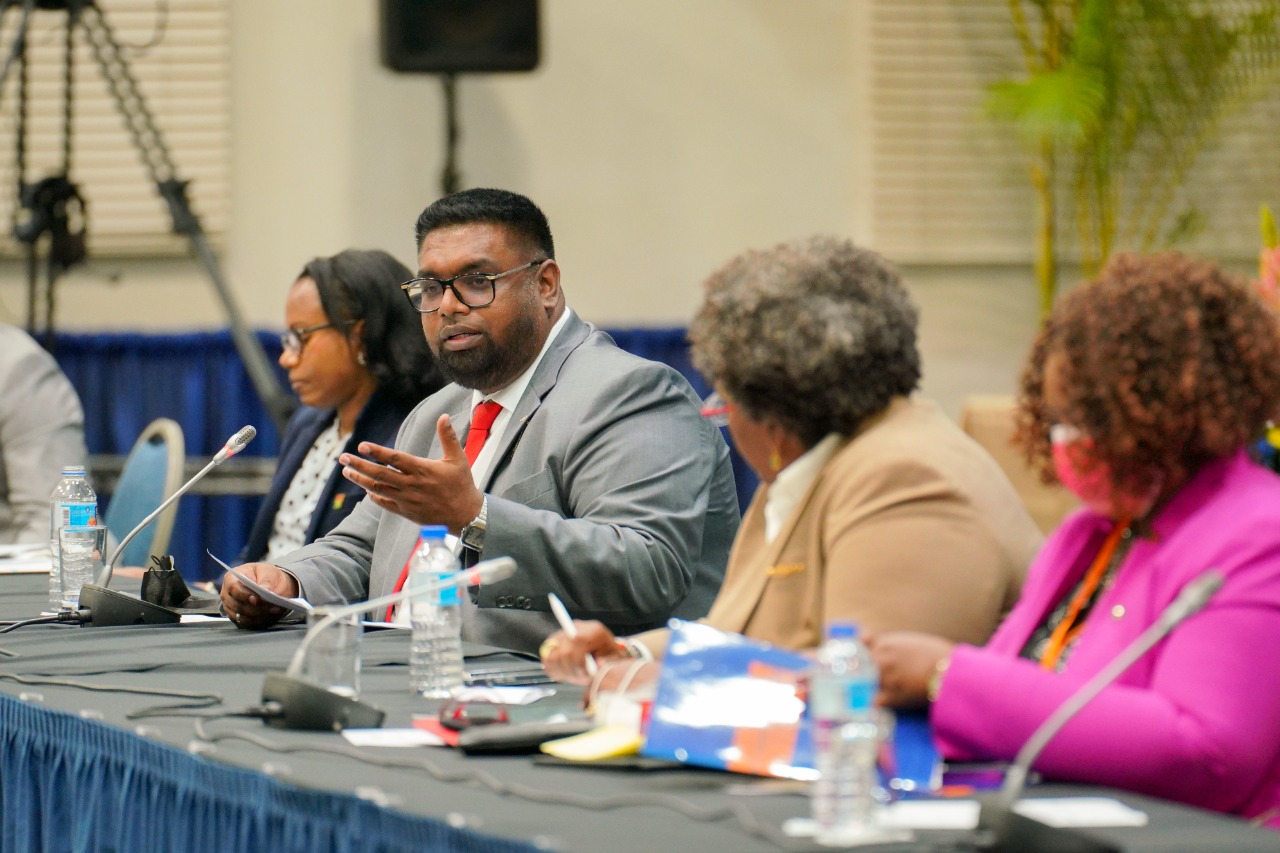 Bridgetown, Barbados—(October 5, 2021) His Excellency Dr Irfaan Ali said there is no need to create a new developmental pathway since the focus should be placed on fixing weaknesses and strengthening the existing system.

President Ali also said that developing nations are not asking for hand-outs or preferential treatment but fairness, especially as it relates to COVID-19 vaccination and vaccines.

The Head of State was at the time responding to a question at the 15th United Nations Conference on Trade and Development (UNCTAD) World Leaders Summit Dialogue III, where he was asked: “The current crisis has highlighted the need to change our development path. In your view, how willing or able are we to do so?”

In his response, the President noted that modifying the current approach might be more beneficial in the long run.

“It is not about the new pathway. It is how do we fix this path? How do we ensure that this path does not lead to greater isolation? That’s the first question that we must answer. Then let us take the whole issue of where this leads us.”

He emphasised that the “difficult questions” must be asked and that the world cannot speak about a new pathway or finding new means when the existing framework has structural and institutional problems.

“We all speak glowingly about the importance of multilateralism in advancing the world, but we should introspect a bit, and ask ourselves, are the institutions that would allow multilateralism to work and to deliver, are they delivering? Are they geared towards the achievement of what we want to achieve, or is there manipulation in the system?”

The Head of State added that in its current state, the world is not recovering from the pandemic since developed countries have achieved a vaccination rate of more than 80% while developing countries are below 3%.

He noted that this recovery is being impeded by vaccine polarisation and discrimination.

It was further explained that the lessons of the world being interconnected that were taught by the pandemic have been forgotten as nations are beginning to isolate themselves by restricting travel from persons who took a specific type of vaccine.

“We’re seeing policies now that will expand that isolation, and I want to make this very clear; it is not that developing countries did not try to get the vaccines. Africa, for example, coordinated through the private sector, a single individual, to negotiate the purchase of vaccines from all the suppliers. In CARICOM, we did the same. Many countries did the same, but the vaccines were just not available to us in the developing world.”

President Ali said that the problem extends beyond vaccination and has morphed into social and economic issues, more so since the Caribbean region has lost 70% of its revenue gained from tourism.  The implications are not just financial, since, according to President Ali, achieving the Sustainable Development Goals (SDGs) by 2030 will be difficult.  He said that developing countries are forced to rewrite expenditure with decreased revenues.  Compounding this is the fact that the region spends US$500M to US$1B annually to repair damages to infrastructure caused by natural disasters with a development package for the Region that stands at $US4B.

The Head of State noted that this is also compounded by the medium and long-term impacts of COVID-19, which are still to be assessed.

President Ali also spoke about the hindrance to multilateralism. He said that those hindrances must be identified and fixed, and as a result, he feels that a stronger bond between Africa and the Caribbean and more “south-south cooperation” is critical.

He explained that it is important for the two regions to come together with common objectives and goals to “apply enough pressure on the system for us to understand that for multilateralism to work, the framework that supports it must work, and must work independently”.

Joint Press Statement on bilateral discussions between Guyana and Barbados