Our future is agriculture and food sustainability—President Ali 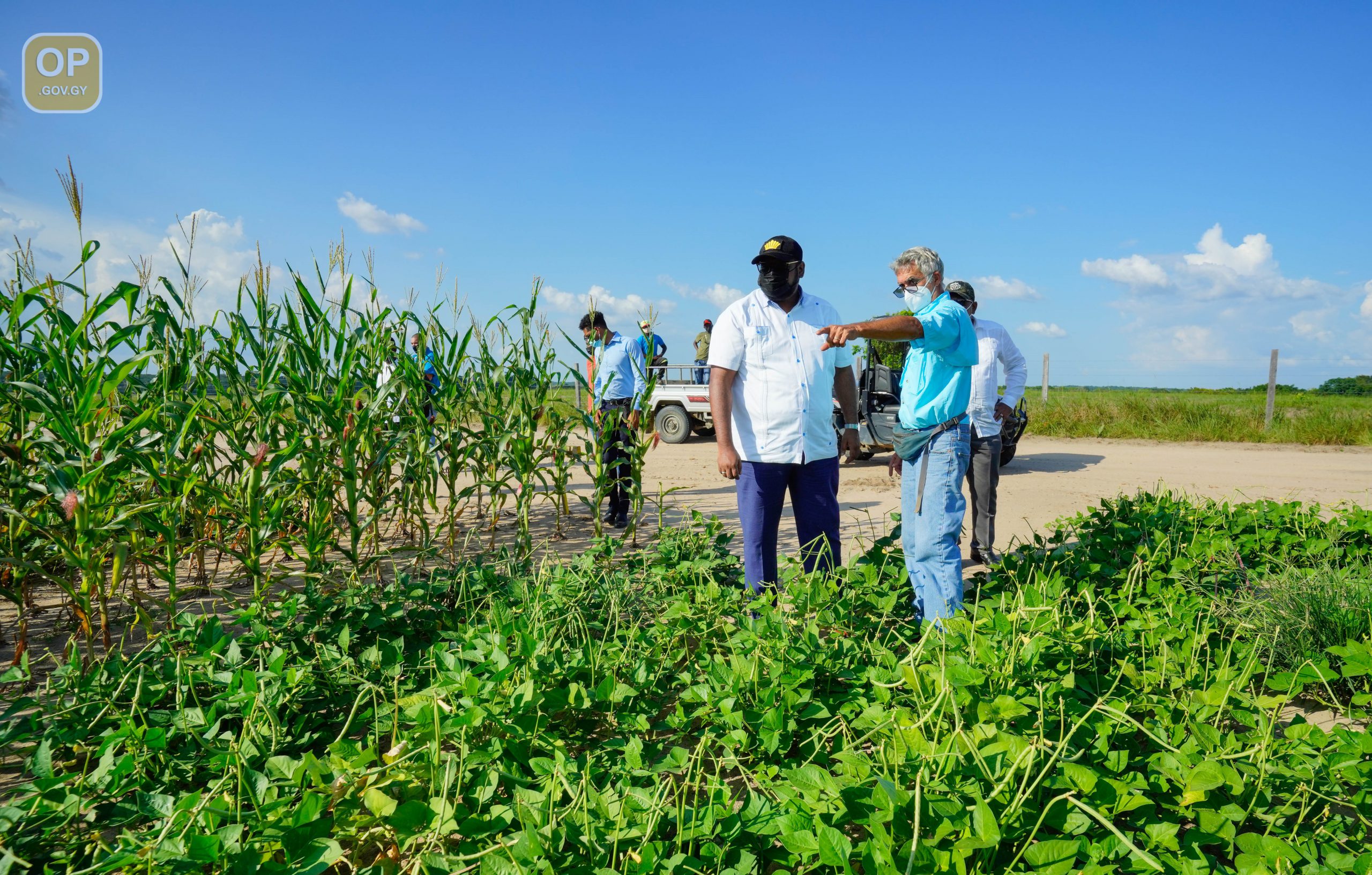 Ebini, Upper Berbice River—(September 27, 2021) His Excellency Dr Irfaan Ali today said that sustainable food and agriculture is the country’s future and that the Government will fully support the soya bean and corn project in Ebini which will help produce much-needed feed for the poultry industry.

“As I have said before, this is our future—agriculture, food security and our ability to service the regional market is our sustainable future, and all of our efforts will be to ensure we transfer enough resources to this sector to make it viable and resilient.”

The Head of State took an on-the-ground tour of the 115-acre soya bean and five-acre corn pilot projects in Ebini, Upper Berbice River, where he was able to closely inspect the crops and evaluate their growth.

He was also given a progress report on the project and the plans for its expansion by David Fernandes of Bounty Farm, Alex Mendez of Dubulay Ranch and Shameer Mohammed from Royal Chicken.

The Head of State said that the existential crisis of climate change makes it more important for the agriculture sector to be resilient and to be guided by scientific and technical standards.

The President said that after having a tour of the project and being able to do a hands-on inspection he is “very confident that this project will be a success”.

He said he wanted to thank the members of the group, which include Guyana Stock Feed Limited, Royal Chicken, Edun’s Poultry Farms and Hatchery, SBM Wood, Dubulay Ranch, Bounty Farm Limited and a Brazilian investor, for the labour, capital and effort they have personally put into the initial phase.

“From all the plans that I’ve heard and the work that I have seen, I am confident that they are on a journey to ensure that we are self-sufficient and that we can have import substitution for both the soya and the corn to meet our local livestock feed requirements.”

The President also commended the commitment and dedication of the group and challenged them to aim higher.

“What I have seen today is most pleasing, it is most remarkable. I want to commend the guys but this is just the start. We have to now replicate this ten-fold in the next crop and then of course after that we move to increase incrementally until we get up to the full production.”

President Ali noted that given the success of the pilot projects so far, it must be replicated on a larger scale. He said that part of doing this will be consolidating and making lands available.

The Head of State pointed out that over the years many leases would have been given out across the country for agricultural purposes that are not being used efficiently or at all up to this day.

As a result, he said, an assessment of those leases will be done.

“We have to get up to 75,000 acres for us to move to full production locally in this area. So in the coming weeks, we will be looking at how we can find that land that meets the soil requirements and the scientific requirements to achieve the target.”

President Ali also pointed out that the project will give the Government the chance to diversify the Guyana Sugar Corporation (GuySuCo).

“We are already discussing how we can expand this partnership and one of the things that we have always talked about in GuySuCo is to have diversification, and we are now discussing with the group how we can use one field in the next phase of the trial to do the same thing that we have done here; replicate the same thing and then to see the cost efficiency, the operation efficiency and the profitability because this is not done for the love of it alone, it has to be profitable, it has to make financial and economic sense.”

The President said that lands in the various estates will be examined and tested to see which can be viable to replicate the project and further diversify the sugar company.

Spokesperson for the group and one of its main contributors, Mr Fernandes also heaped praises on President Ali for birthing the idea and the Government for its continuous support.

Mr Fernandes related that in his years in the private sector he has never experienced such consistent Government support in a project.

“It’s for the first time in the private sector I found that we have actually had the Government actually initiate something that we are part of in terms of agriculture. Where they are actually pushing us along the road of developing this and we hope not only to provide for the local market but in the very near future our sister CARICOM territories; which I don’t think is too difficult for us to do.”

He further explained that the group would not have thought of the idea, especially for the poultry sector, if it wasn’t for the push from President Ali.

Mr Fernandes also explained that the results so far from the trial have the group “quite excited”.

“We are not very far away from reaping, we could probably start reaping this in about three weeks and then we will know exactly what the productivity looks like. We already know what the costs are up to this point, so it is interesting and I think that with the push the Government has given us, we will go on to the next stage of doing 2500 acres and then beyond that, it will be a level of acceleration that will probably be interesting to see.”