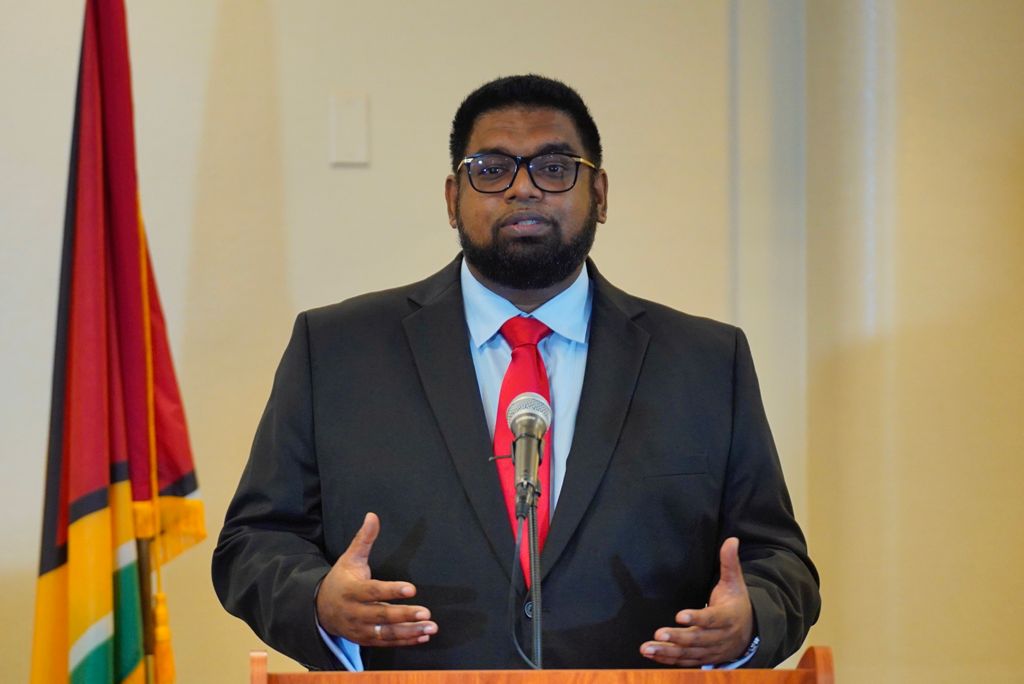 New York, USA— (September 24, 2021) His Excellency Dr Irfaan Ali today said that Guyana has attracted significant attention at the international level and indicated that it was due to the country’s stature as a fast emerging economy.

The President, who made the disclosure at a press briefing in New York, pointed to his packed week of activities, which resulted in him interacting with numerous Heads of Government and leaders of International Organisations.

President Ali, who left Guyana last Friday for North America, first stopped in Mexico for three days at The Community of Latin American and Caribbean States (CELAC) Summit, before he travelled to New York this week for the United Nations General Assembly.

During these visits, he held over a dozen fruitful bilateral meetings with leaders from the Middle East, Europe, Africa and Latin America as well as representatives from several international organisations.

“It is clear that Guyana is an area of high focus. Our country is playing on a different stage, our country is getting a different level of attention; our country is being focused on…It has been a long week putting Guyana, and the opportunities Guyana have, on the international stage—and the response has been enormous. We have had to manage time very carefully. We still have a lot of meetings and requests for bilaterals.”

A number of leaders expressed their interest in visiting Guyana in the near future, including President of Kenya, His Excellency Uhuru Kenyatta and Colombia’s President, His Excellency Iván Duque Márquez.

Guyana is also expected to send a delegation to Ghana, at the invitation of His Excellency Nana Addo Dankwa Akufo-Addol early next month.  Vice President, the Honourable Dr Bharrat Jagdeo is expected to lead the delegation.

That engagement, President Ali explained, will focus on the oil and gas sector, technology transfer and integration between the two countries.

“In addition to that, we had many interactions with private sector groups, major financial institutions, who came together and wanted to have a better understanding of where the country is going, where the economy is going, what are the business opportunities.”

The President said that these delegations will visit the country to do a “physical evaluation” of what opportunities are available in the various sectors in Guyana.

“We have spoken to many of these investors, sophisticated investors, about the opportunities and food security, agriculture, the services industry, manufacturing, and of course, the diversification of our energy sector.”

The investors, the President added, are willing to make large investments in both the public and private sectors. The President and his team were however adamant that Guyanese must also benefit from these investments as part of the Government’s Local Content Policy.

The President pointed out that the investors were happy that opportunities will be available in non-oil sectors, since they are looking at the sustainability of their investments and the long-term effect of the country’s development.  Additionally, the Government officials were forced to do damage control since the interested parties were aware of last year’s election fiasco and wanted to ensure that the country remains democratic.

“From all the engagements, it is clear that persons were following the five months [after the March 2020 General Elections], and of course it raises questions from them in terms of the sustainability of a country when you have democracy threatened the way it was threatened. So, we had to repair a lot of damage. Also, we had to answer a lot of questions in relation to that. But we are very happy that we had the opportunity to do so. And we were able to present Guyana as a strong emerging market, not only for oil and gas, but for various opportunities that will come.”

President Ali also noted that the Diaspora is an important part of his Government’s developmental framework and while he has had meetings with various groups so far, (including one with the Business Community this afternoon), there will be more opportunities in the remaining days for further engagements. He also said that it is not only the Government that recognises the importance of the Diaspora, but also leaders and “large institutions”.

“The growth of our country would require a far larger population than we have back home and the first go-to population will be the population in the Diaspora for your skills, and for you also to be involved in what is taking place.”