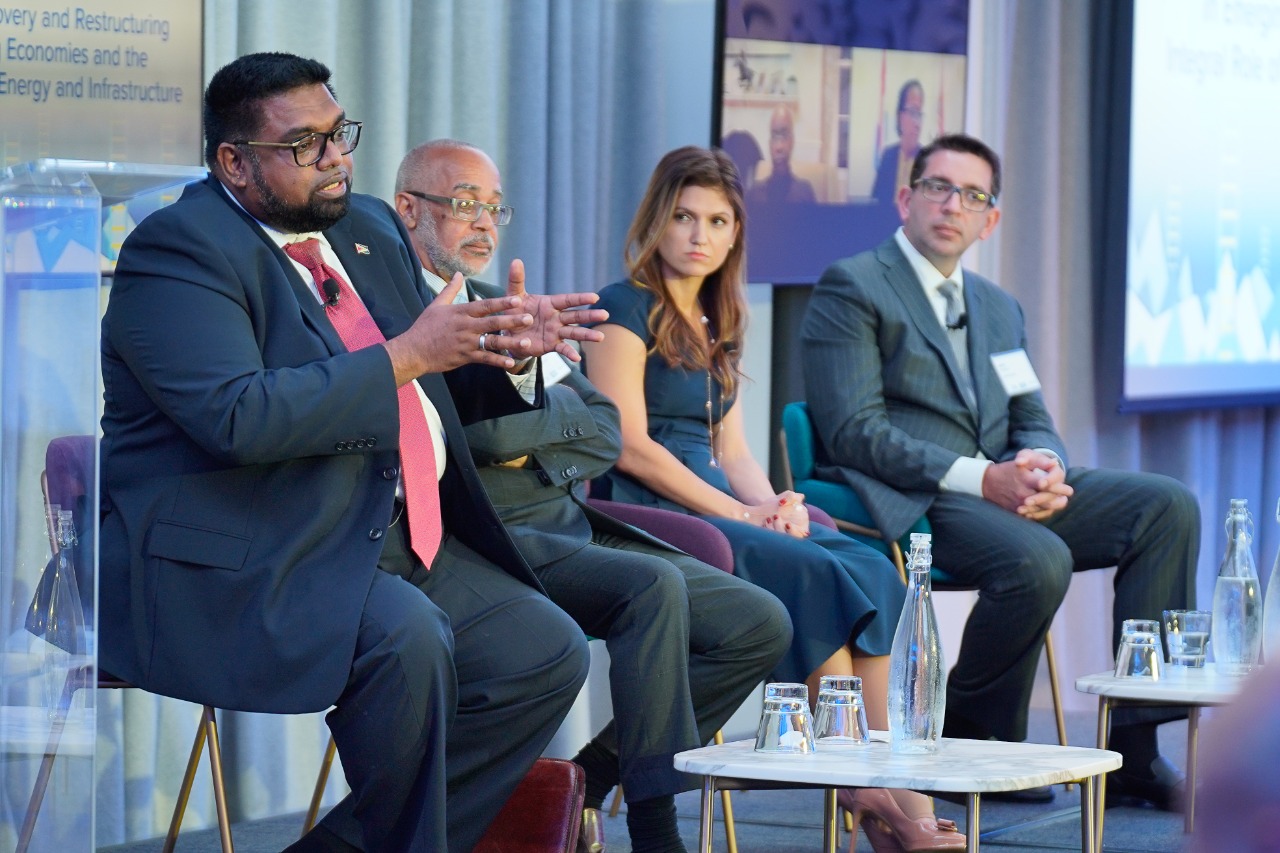 New York, USA— (September 23, 2021) His Excellency Dr Irfaan Ali on Wednesday night called for a less profit-driven approach to the vaccination process and pointed to his country’s recovery plans being in sync with the rest of the region.

The Head of State was one of several leaders who participated in a panel discussion on the “Economic Recovery and Restructuring in Emerging Economies and the Integral Role of Energy and Infrastructure Development” organised by the Global Business Leadership Forum, Goldman Sachs and O’Melveny in New York City.

In highlighting the significant impact that the Covid-19 pandemic has had on Guyana and sister CARICOM nations, as well as other small developing countries, the President pointed to the clear disparity in the system.

“Unfortunately, what the pandemic has taught us is that disparity still exists in the world. What it also taught us is that at a time when the world was supposed to be coming together with greater strength, the world was insulated with every country fighting on its own and every individual fighting for themselves…so you’re facing a pandemic of equal proportions at the health level, but disproportionate proportions at the economic and social levels.”

The President noted that the developing world and poorer countries are more affected by the pandemic due to the disparity and will take longer to recover.

He also lamented on the preferential treatment of certain vaccines, especially as prerequisites for travel and opined that many of the demands are driven by business and profit.

In responding to a question regarding his plans for economic recovery and restructuring, President Ali noted that Guyana’s recovery strategies are linked to the region.

“Well first of all let me say that Guyana’s plan is linked to the regional plan. We can’t separate ourselves from the collective, because any country in the CARICOM region who wants to claim success cannot claim success if the other countries in the region are not successful too.”

The President said that the pandemic coupled with the effects of climate change has intensified his Government’s drive for economic diversification.

“We are working on economic diversification, making every sector of the economy competitive. You have to invest in food security, sustainability, and ensure that our economy is diversified in such a way that it can withstand various shocks.”

In calling for a differentiated approach to dealing with climate change and the environment, the Head of State said that practical steps must be taken to ensure that developing countries like Guyana are not made to carry the same burden as the developed countries in relation to the cost of the use of natural resources.

He said that Guyana has been severely affected by climate change. “We are a low-lying coastal country.  We had massive floods over the years.”

The President added that regional nations are also facing the brunt of climate change and called for more to be done for their recovery and development.

The President also noted that the pandemic has created a regression in learning, hindered access to resources, and caused a reclassification of loans for developing countries.  He said that these changes should be addressed at a global level in order to aid the recovery process of the most affected countries.

Overall, he called for more honest and forward-thinking approaches in dealing with global issues and their effects on developing nations.

Minister of Foreign Affairs and International Cooperation, the Honourable Hugh Todd, Ambassador and Permanent Representative to the United Nations, Carolyn Rodrigues-Birkett, and Foreign Secretary, Mr Robert Persaud were also at the forum.