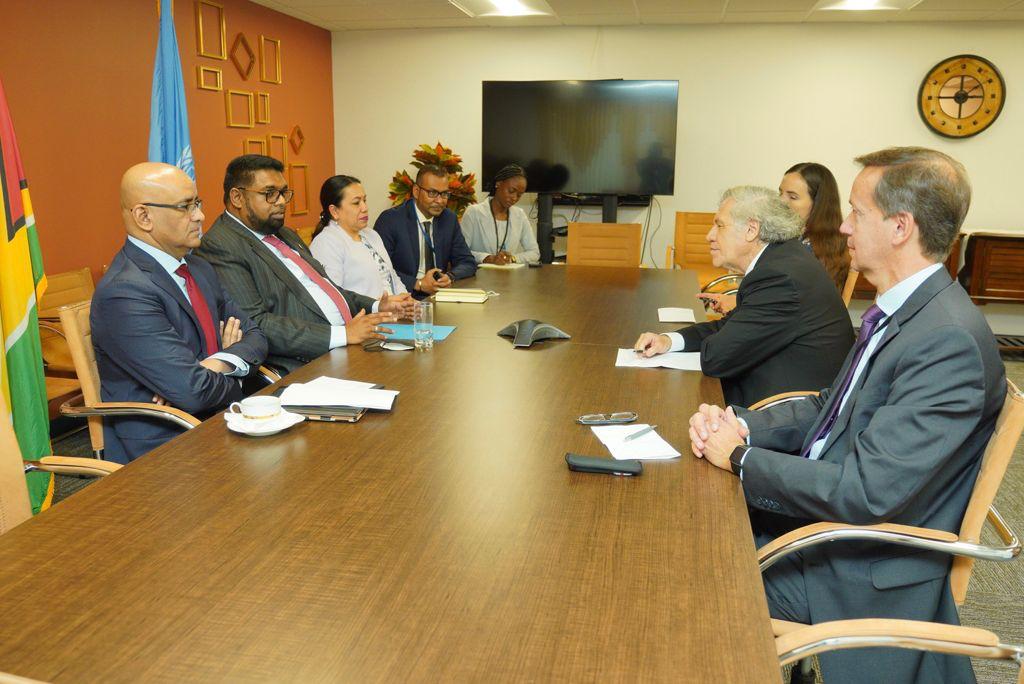 New York, USA— (September 21, 2021) His Excellency Dr Irfaan Ali and several members of his Government today held a productive meeting with the Secretary-General of the Organization of American States (OAS), Mr Luis Almagro.

A number of matters were highlighted by the Guyanese officials in the meeting held at the Office of the Permanent Mission to Guyana in New York. Among them included the strengthening of democracy in Guyana through electoral reform, support for Guyana’s position on the border controversy with Venezuela and Guyana’s position following the Venezuelan Government-Opposition accord made earlier this month.

On the settlement of Venezuela’s internal political differences, President Ali reaffirmed that while his government welcomes efforts to bring about domestic harmony within Venezuela, agreements that defy international law and processes can form no basis for mediating such harmony.

He said that Guyana does not promote the use of violence or threats to settle disputes, but will look towards the court and the rule of law.

In a 1966 Agreement signed in Geneva, both countries consented to the UN Secretary-General deciding on a means of settlement of the controversy if the countries could not settle the matter on their own.

In January of 2018, UN Secretary-General António Guterres decided that the International Court of Justice (ICJ) would settle the matter.  Since that decision could have only been overturned by a joint agreement by both countries, the ICJ was established as the governing body for the matter and both parties were bound by the Court’s jurisdiction and ultimate decision.

In addition to the border issue, the Head of State and the Secretary-General also discussed technical support to advance the country’s development agenda.

Brazilian state wants to be integrated into CA

MoU between Guyana/T&T a commitment to enh