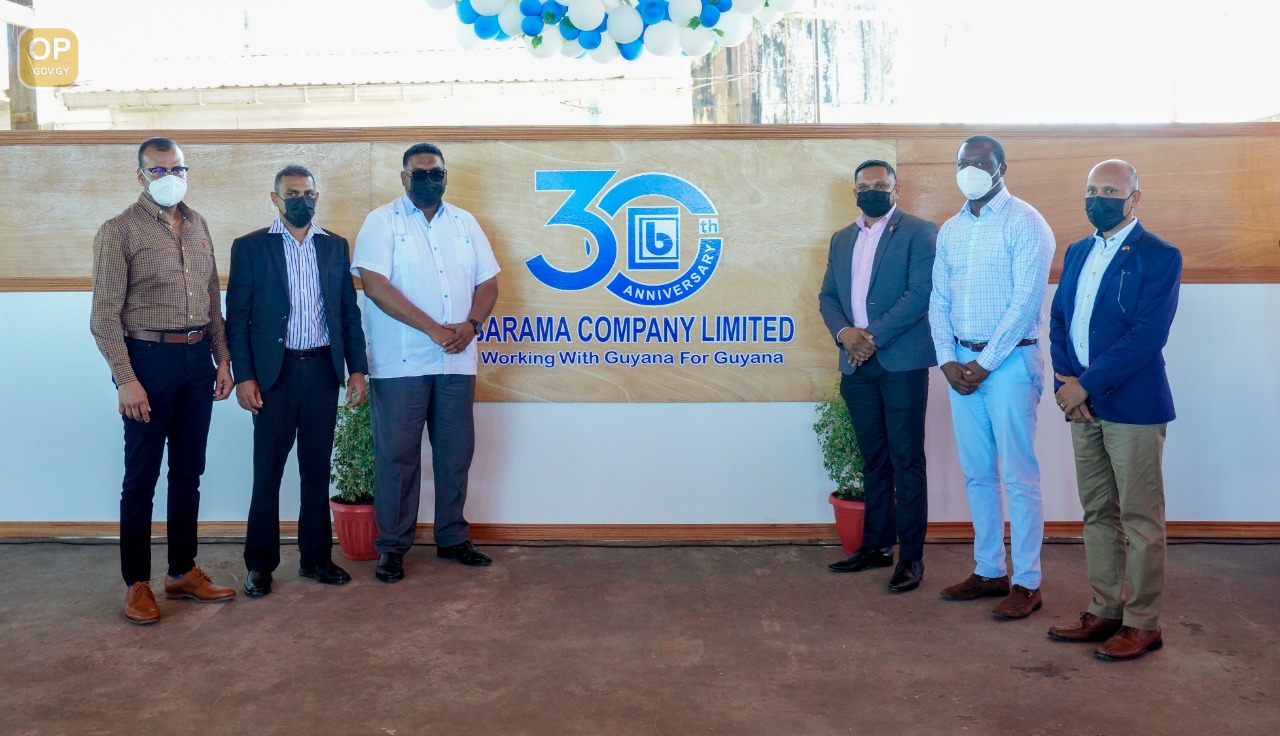 Georgetown, Guyana—(September 12, 2021) His Excellency Dr Irfaan Ali this afternoon said that his Government is ready to work with the manufacturing sector to certify their value-added products and to fuel growth in the forestry sector.

President Ali made the remark during his feature address at the Barama Company Limited’s 30th Anniversary celebration at their Land of Canaan, East Bank Demerara headquarters.

The Head of State said that the sector has to move towards product certification to stay relevant in an ever-changing market.

President Ali said that a collaboration between the Government and the Guyana Manufacturing and Services Association (GMSA) is needed.

He noted that for production volume to increase, a value-added commitment, linked to quality control and consistency must be made.   Additionally, it is necessary to develop a system of efficiency in the local market and a strategic formula on how local demands for value-added products are driven.

Meanwhile, General Manager of Barama, Mahendra Chand, in his presentation said that the projected log intake for next year will be between $800M and $1B from local operators, which is also expected to create hundreds of new direct and indirect jobs. He also noted that the company is looking to finalise an investment of nearly $1B to expand its operations again, which includes returning to the logging business.

President Ali said that the Government welcomes and embraces the company’s bold projections for its future; he added that his Government will do all that it can to fuel the growth of Barama and others in the sector.

Mr Chand recollected that between 2015 and 2019 the company suffered tremendously and had to scale back its operations to just plywood production, which forced over 600 workers out of jobs.

He credits the President Ali-led Administration for its “most propelling impetus” for the company’s new plans of expansion and investment.

The General Manager noted that it began with the Government lobbying for the relaxation of the Common External Tariff (CET) of imported ply in Guyana from 10% to 35%, as well as the reduction of taxes on the importation of vehicles for the industry and other Government policies.

President Ali said that it was the Government’s recognition of the decline in Barama’s operations and the Forestry Sector as a whole that resulted in progressive policies.

“We are aware of the fact that Barama was forced in 2016 to relinquish its forest concession which was then divided and allocated to other players in the sector. This forced the further downsizing of the company and a loss of investment by Barama and we have heard today that that loss of investment was to the tune of US$15M.”

The President underscored that the Government also recognises the negative effects of the high cost of energy on the manufacturing sector. He said that this is why his Administration is moving towards the proposed gas-to-shore project, the Amaila Falls Hydro Project and others in a bid to halve the cost of electricity.

“My Government is committed to supporting efforts to shift production to more value-added products. As such, I am impressed by the efforts that I have seen today and which are being made by Barama to diversify its product line.”

The company also launched a new water-resistant plywood at the anniversary celebration.