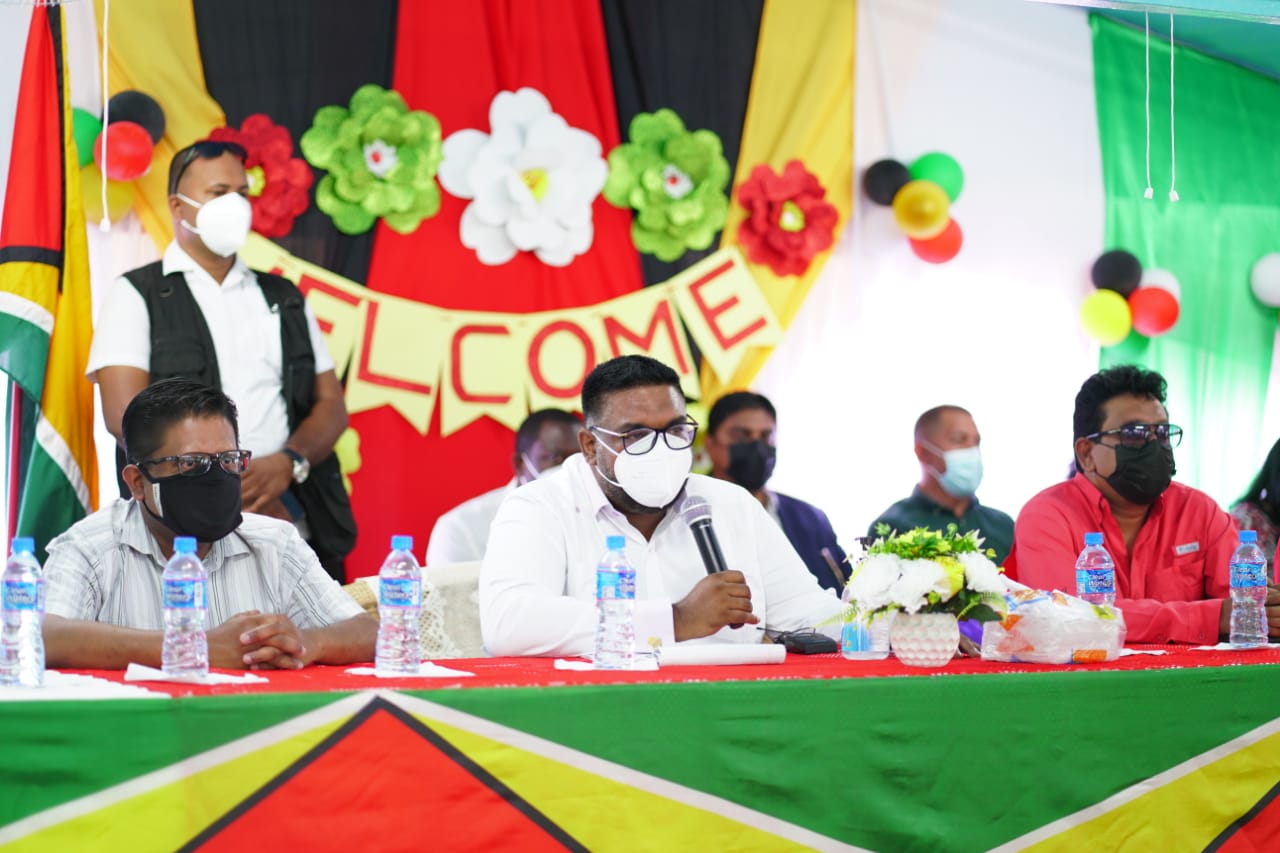 Charity, Region Two—(September 11, 2021) His Excellency Dr Irfaan Ali reassured residents of Charity today that a large number of the concerns raised during his two-day visit to Pomeroon-Supenaam (Region Two) will be addressed within weeks, while most will be resolved by the end of the year.

He said that the objective is to address the issues raised during the outreach in the shortest possible time.

The President made the remarks at a community meeting at the Charity Secondary School on the final day of his two-day Cabinet Outreach to the region.

“So you will see in a transparent and open way what will be done with your issues.”

In addressing the concerns of the Region Two residents, the President and his team have already resolved several matters.

He said that after a meeting on Friday evening with the private sector of the region, they have agreed to purchase 12 new police vehicles to bolster the lawmen’s effort to fight crime within the region.

He also stated that the Government has approved the purchase of 30, 000 household solar units for residents in Pomeroon.  Adding to this, the Government will also procure a chemical analyzer to improve the services offered at the public lab in the region.

The National Agricultural Research and Extension Institute (NAREI) has also agreed to lower plant prices and to distribute several free plants to residents; while the cost for the construction of a shed at the Charity Secondary School will also be included in the 2022 budget.

At the request of residents, over a dozen sports clubs in the Region also received cricket gear.

PRIORITIES OF THE REGION

The President said that the outreach is geared to enhance the lives of Region Two residents.

He said that among the priority of the residents are security, rehabilitation of dams and drainage canals, the empoldering of the Pomeroon River, opening up of new lands for farmers to increase production, increasing the ferry service between Supenaam and Parika, enhancing the education sector of the region and improving health services.

The Head of State noted that measures will also be put in place to train persons from the region in the field of education, health services and law enforcement.

On Friday, the President announced that the Government has requested 35 students, who meet the criteria, to be trained immediately to become nurses and midwives due to a shortage of medical professionals in the region.

He also made arrangements for the region to be bolstered with five additional doctors.

“So, we are responding as fast as we can. And we’re trying to integrate the system as quickly as we can.”

President Ali used the opportunity to thank the teachers and frontline workers from the region for their “invaluable services”, which he said Guyanese are “thankful and grateful for”.

The President also implored the residents to get inoculated against the deadly COVID-19 virus.

Meanwhile, several Cabinet Ministers also addressed the audience. Minister of Public Works, the Honourable Juan Edghill said that the Government has awarded four contracts at the tune of almost $70M for sectional repairs of the main thoroughfare.

Senior Minister within the Office of the President with responsibility for Finance, the Honourable Dr Ashni Singh emphasised that Cabinet outreaches are reflective of the People’s Progressive Party’s approach to Governance and has become a distinctive characteristic of the President Ali-led Administration.

Minister of Tourism, Industry and Commerce, the Honourable Oneidge Walrond also spoke about the Government’s plans to improve tourism in the area, while Attorney General and Minister of Legal Affairs, the Honourable Anil Nandlall used the opportunity to update the residents on the Guyana-Venezuela border case that is currently in front of the International Court of Justice.

Education opportunities will be enormous for youths and women—President Ali