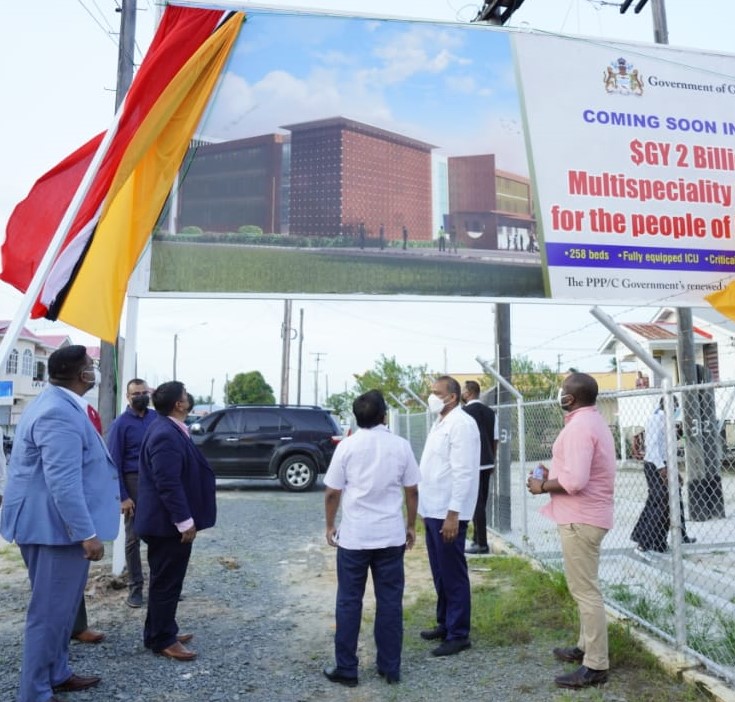 Suddie, Essequibo Coast—(September 10, 2021) His Excellency Dr Irfaan Ali today said that the new $2B multi-speciality hospital, to be constructed in Suddie on the Essequibo Coast, is part of the Government’s national plan of modernising the healthcare system and ensuring the delivery of improved healthcare services to small and satellite communities.

This, he added, will help in linking the healthcare facilities.

President Ali made the pronouncement at a simple sod-turning ceremony for the hospital.

“What is happening today is part of a national architecture of modernisation of the healthcare system.”

The President said the focus is not only on the healthcare system and providing health services to people but also on health education as well as other services that includes preventative healthcare.

As a result, he announced that the Ministry of Health under its Minister of Health, the Honourable Dr Frank Anthony, will be launching an “aggressive education campaign.”

President Ali also said that the focus will be placed on properly equipping primary healthcare facilities to provide the necessary services to meet the expectations of citizens.

He added that another pillar of the Government’s modernised healthcare system is building the capacity from locally trained nurses, medex and midwives, to more specialised training.

The Head of State said that the Government is extremely confident that the hospital will add “great value” to the healthcare system in the Region.

“More importantly, this will be like a network. We are creating a network in the Region. The riverine areas, the small communities or satellite communities will be networked into this facility. So as time goes by, you will see all the health clinics, outposts and regional hospitals equipped more and more with higher levels of service that will be integrated into the national healthcare delivery system.

The President also noted that the Government is working on a one-card health information system/patient information management system.

“So this is the type of innovation and modernisation we are talking about in the healthcare system.”

The President said that the Government is looking at proposals in terms of cancer research and cancer treatment.

He also announced that the Ministry of Health is involved in high-level discussions with the “high-end of the health business.”

President Ali also noted that in the technical meeting with Cabinet today the issue was raised about the lack of nurses and midwives.

As a result, the President said, that the Government has requested 35 students who meet the criteria to be trained immediately to become nurses and midwives.

President Ali also said that it was brought to his attention that the Region was lacking doctors, as a result, five additional doctors will be posted.

“So, we are responding as fast as we can. And we’re trying to integrate the system as quickly as we can.”

The Head of State also used the opportunity to implore the residents and healthcare workers to get inoculated against COVID-19.