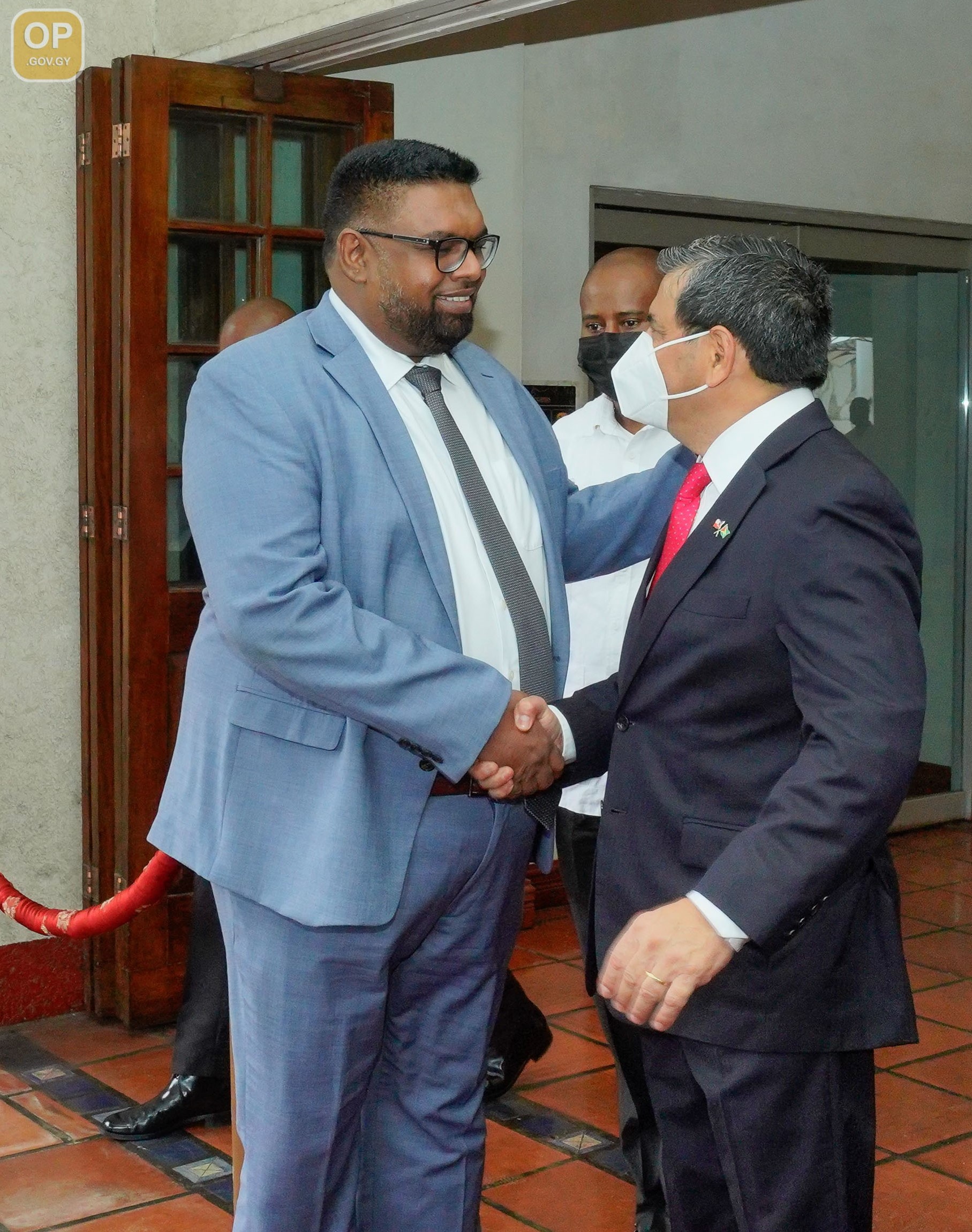 Georgetown, Guyana—(September 9, 2021) His Excellency Dr Irfaan Ali today told the Chilean Ambassador to Guyana, H.E Juan Manuel Pino Vasquez to convey to the Chilean President and his Government that Guyana is committed to advancing the “excellent and mutually beneficial relations” with Chile.

He said that his hope is for the two nations to work “even closer together” to collaborate on issues of mutual interest and concerns to the “development of our peoples and our region as a whole”.

The Head of State, who spoke at a reception held at the Pegasus Hotel to celebrate the 50th anniversary of the establishment of Diplomatic Relations between the two South American countries, called the event a milestone.

“These relations have been predicated on shared values, friendship, and mutual interests. Guyana attaches great importance to these relations, which have been enhanced through the establishment of a resident embassy of Chile in Georgetown.”

The Ambassador read a special message to President Ali from the Chilean President, His Excellency Sebastian Piñera, which stated that Chile wishes to strengthen its friendship and cooperation with Guyana.

“We share principles and values that are so precious in our democracies, such as the rule of law, respect for human rights, integral and sustainable development, defence of the environment…territorial integrity and certainly the observation of international law,” the Chilean President wrote.

President Piñera said that along with its South American ties, Guyana is also a strategic partner for Chile in CARICOM.  He said that the establishment of a resident embassy is a “milestone and an eloquent expression of our solid commitment to Guyana”.

President Ali noted that Guyana and Chile share a deep commitment to democratic values, the promotion and protection of human rights and the rule of law, and the guarantee of fundamental freedoms.

“We are also enjoined in our commitment to the respect for sovereignty and territorial integrity of States and for the sanctity of treaties. Guyana-Chile relations have been buttressed by cooperation in a variety of fields over the years, and have found expression at the bilateral, regional, and multilateral levels.”

The President told the gathering that the Basic Agreement for Technical and Scientific Cooperation, signed in 1997, remains a cornerstone of relations between the two countries.

“I express Guyana’s sincere appreciation for the support we have received from Chile, including in the areas of agriculture, geology, human resource development, language training and mining.”

He said that he also welcomes Chile’s interest in strengthening economic and commercial links and hopes that the countries can establish a practical programme of cooperation to achieve the objective.

“The Government of Guyana is steadfast in its resolve to protect the lives and livelihoods of the Guyanese people, even as we work to strengthen the foundations of democracy and development and to build a more resilient and sustainable economy. We remain focused, in particular, on the development of our agriculture sector while harnessing the opportunities in emerging sectors such as oil and gas and information technology.”

The President also told the Chilean official that both countries share a common interest in mitigating the effects of climate change.

“Climate change remains a top priority on our agenda. Like Guyana, Chile has suffered from the adverse effects of climate change. We, therefore, share a common interest in ensuring urgent action to realise the objectives of the Paris Agreement.”

The President said he hopes for a “consensus on mitigation and adaption measures necessary” to combat the adverse effects of climate change when they attend the UN Climate Change Conference (COP26) scheduled from October 31 to November 12 in Scotland.

The President also toasted to “a lasting friendship, and peace and prosperity” for both countries. He said that the countries must now embark on a new journey to bring the nations and their citizens closer together.

“The future starts now…We must look to the next fifty years of an enduring and lasting friendship characterised by greater collaboration in our bilateral and multilateral relations.”

A number of Government Ministers were also at the event.