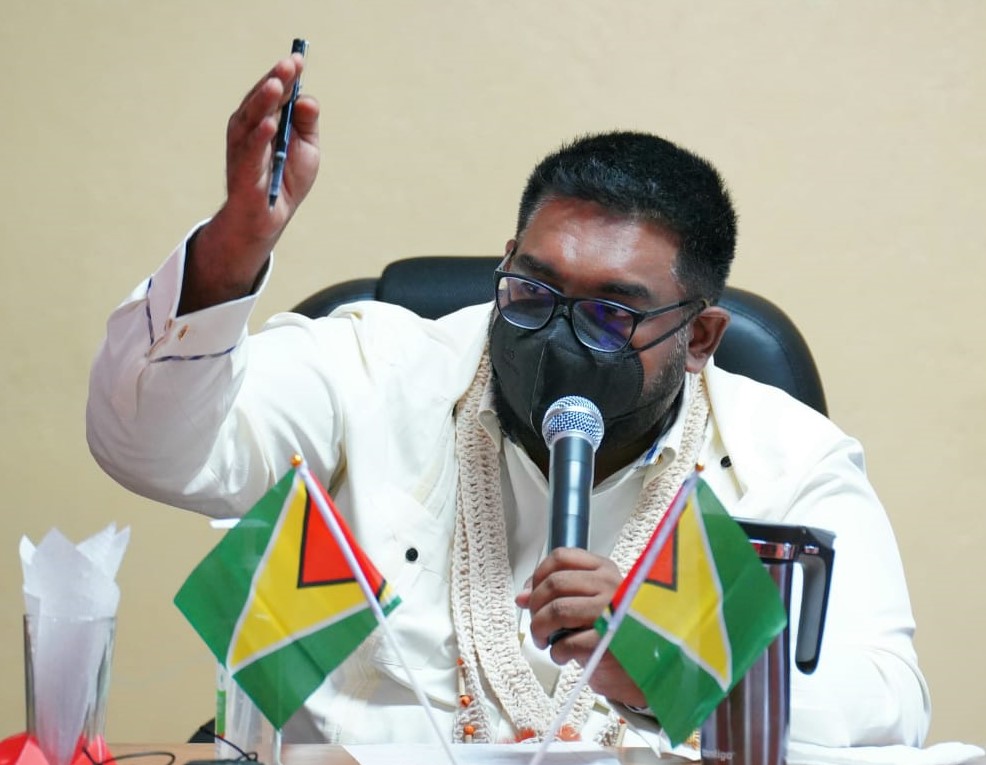 —Says his Government will foster their economic empowerment across the country

Lethem, Guyana—(September 4, 2021) His Excellency Dr Irfaan Ali today informed a gathering of toshaos from Region Nine (Upper Takutu—Upper Essequibo) that his Government will ensure that Amerindians are economically empowered and are integrally involved in the national decision-making process.

The President made these remarks during his feature address on day two of the Regional Toshaos Meeting, which saw the attendance of leaders from over 50 communities from the region’s five Sub-Districts.

“I assure you that you will not be sidelined from the process of national development but rather, be integral to that process. One of the purposes of the National Toshaos Conference is to allow you to have an insight into national development plans and to contribute to the fashioning of these plans, particularly as they relate to the well-being of Amerindians. My Government is committed to strengthening your inclusion in national decision-making. We will engage with you continuously and do so in a genuine spirit of inclusion.”

The Head of State emphasised that his Government is devoted to the principle of Free, Prior and Informed Consent (FPIC) as it relates to policies that affect the well-being and rights of indigenous Guyanese.

“We will foster Amerindian economic empowerment across all ten of the country’s administrative regions. We will continue to support your rights, including your just entitlement to Amerindian lands.”

The President said that the Government is well aware that land is important for indigenous development, and as a result, provisions were made in the budget to make Amerindian land titling a priority.

“My Administration has already commenced a project to restore and establish a mechanism through which will resolve all outstanding land disputes and expedite the land titling process.”

The President said that his Government, by way of Cabinet Ministers and other Government officials will continuously engage the village leaders about enhancing their development.

“I want to assure you that every day we will dedicate our lives, our energies in service to you, your families and people of the communities.”

The Head of State stressed that over the past year, the Government has been proactively promoting indigenous development. He reminded the toshaos that the National Budget has allocated in excess of $5.4B that will be injected into the development of Amerindian and hinterland communities.

President Ali noted that there will be improvements to social services, health facilities and ICT services to ensure that Amerindian communities can experience the same way of life as those living on the coast.

He said that these improvements will not only enhance their overall development, but will empower hundreds of their youths that are currently enrolled in the GOAL 20,000 online scholarship programme.

“We are responding to your appeals for the establishment of a permanent well-staffed, well-equipped and fully-supported Secretariat building,” the President said, while adding that the Government is also examining the prospect of having farmers licensed to own firearms.

The President also highlighted that infrastructural development will be a central focus in order to reduce the time and cost for the movement of goods and services.

“We want to build infrastructure that is linked to economic empowerment and that is the type of discussion we will be having with you soon.”

The regional community leaders were also reminded that their communities benefitted from Government’s interventions through the Presidential Grants and the Economic Investment Fund, which saw the allocation of $68.3M to support community development in 2020. He added that the region has also benefited from $456M to finance projects and proposals under the Economic Investment Fund.

President Ali also explained that the Government is working on launching the Hinterland Housing Project. He added that part of the condition in the contracts will ensure that materials and labour are sourced locally, which will add to the development of the region and its communities.

The Head of State also stressed that all development has to be planned in the context of climate change adaptation and mitigation.

“We have seen the floods—bigger and more forceful than ever…therefore, our infrastructure and our approach to development has to take climate change and the spinoff of climate change into consideration.”

The President emphasised that the Regional Conference has to address, in a substantive way, the economic, social and environmental concerns of the people of the region and should focus on food security, economic diversification, empowerment and social transformation as it relates to health, housing, education and social welfare.

“The final goal is to ensure all of these things are blended in a way that will make you live longer and more prosperous in dignity.”

After the formal part of the meeting, President Ali engaged the community leaders in a question and answer segment where he addressed all of their inquiries and gave them additional information on the Government’s projects and developments that are aimed at improving their lives.

Several Cabinet Ministers were also at the two-day meeting.