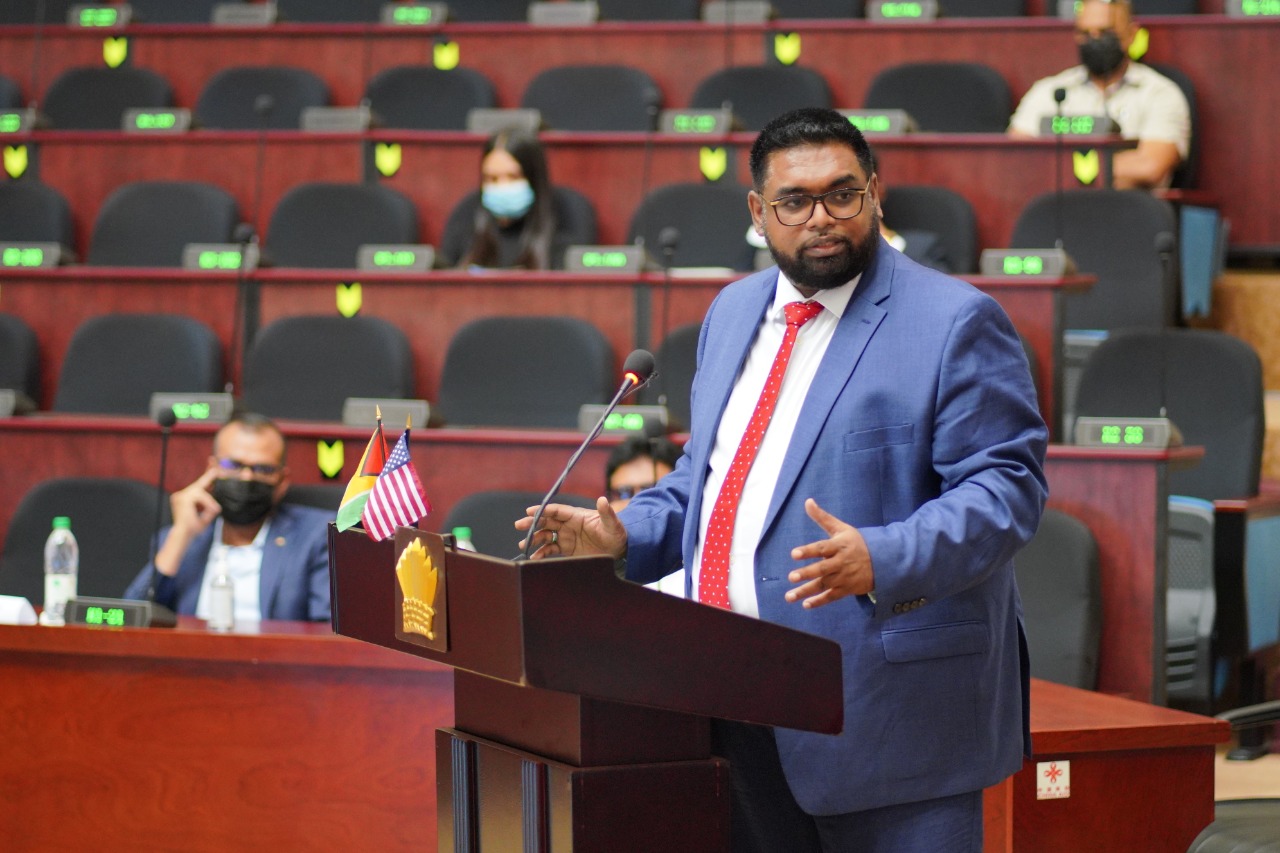 Georgetown, Guyana—(September 1, 2021) His Excellency Dr Irfaan Ali this afternoon told members of the American Chamber of Commerce (AmCham) Guyana that he is looking forward to them championing the country’s quest in the removal of barriers to trade.

He said that although the organisation has done very well in promoting opportunities for United States businesses in Guyana, more can be done for local businesses with investments in the US.

“Whilst I’ve seen great aggression in you championing the cause of American businesses here, which we appreciate, we need the same aggression in championing our cause.  You should be in the forefront of ensuring that our catfish and our gilbaka (gillbacker) get back on the American Market.”

In a passionate address, the President congratulated the new AmCham President, Attorney-at-Law Devindra Kissoon, at a post-Annual General Meeting function at the Arthur Chung Conference Centre and challenged him and his executives to push the organisation to new heights.

He told the new executive that the time is right to take the non-profit organisation to the next level and to create varying opportunities for people from both countries.  He noted that this would enhance the organisation’s image and bridge the gap between them and ordinary Guyanese.

“When we do these things; then the ordinary people out there would see the necessity of what they term ‘sophisticated people’ in this room sitting; otherwise, we mean nothing to those people, none of us. Because when they look in this room, they will see a talk shop. But when they can see you out there fighting for something they know that can improve their lives, or give them an opportunity, then they feel a part of this.”

The President said that catering to the needs of ordinary Guyanese is essential in improving credibility, opening up new opportunities, and enhancing our roles in the development of our country.

The Head of State spoke highly about the role of AmCham since its establishment in 2018 and credited its previous leader Zulfikar Ally and his team for leading the charge.

“I am very proud of the work that Zulfi and the team would have done over the years. The integration of AmCham into the society and ensuring the acceptance and relationship building with the existing Private Sector body was crucial, and I think we can all be proud of the way that turned out. I am confident that the expertise of Devindra and his experience will hold him in good stead in leading AmCham-Guyana during his tenure.”

The President not only credited AmCham for fostering and strengthening increased trade and commercial ties with the United States, but for its role as an election observer, as a business-support organisation and as a driving force in attracting foreign direct investments into Guyana by providing a gateway for American companies to do business here.

The organisation was also credited for playing a key role in Guyana’s representation at the recently concluded Offshore Technology Conference.

The President said that the organisation could also help to promote Guyana’s non-oil sectors.

“As Guyana moves forward into a booming oil and gas economy and as my administration prioritises diversification to avoid the natural resource curse, we look to AmCham as a key player in attracting the necessary investments in the non-oil sectors. And I want to emphasise that there are major opportunities in the non-oil sectors.”

The President added that it is the intention of his Government to work assiduously to create an environment where all investors, including Americans and the diaspora, can invest in Guyana with the confidence of macro-economic stability, respect for the rule of law, ease of doing business and, generally, a conducive business climate to ensure prosperity for all.

“AmCham has a great start. I am confident that it will continue to be a positive force for trade and investment in both Guyana and the United States.”