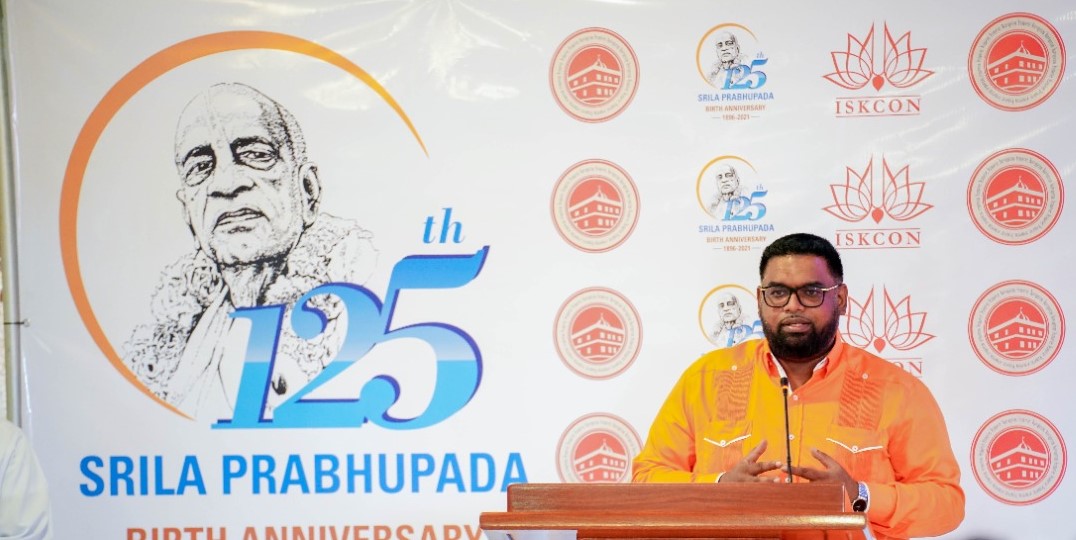 Georgetown, Guyana—(August 29, 2021) His Excellency Dr Irfaan Ali said that all Guyanese must respect and treat each other as part of the same collective family in order for the country to achieve national unity.

The President expressed the hope that Guyanese would see similarities over differences and would band together out of appreciation for our uniqueness and our oneness.

He pointed out that achieving national unity would not be a smooth road given that there are numerous challenges; but noted that it should be the only road, especially since fundamentally we are stronger together.

The Head of State made these comments during his feature remarks at the 125th Birth Anniversary celebrations of His Divine Grace A.C Bhaktivedanta Swami Srila Prabhupada at the Hare Krishna Study Centre in Cummings Lodge today.

The President noted that whenever he visits any of the ISKCON’s facilities across the country he always feels comfortable, welcomed and honoured.  He said that Prabhupada’s life experiences and work can be reflected on to see “real examples, real principles, real values that existed and continue to exist that shape the mind and thinking of individuals”.

Those values and principles, he added, must be translated into our own lives.

He explained that while spiritual and political leaders are seen on the extreme ends of the spectrum, it is not entirely true given that both have similar tasks.

“A spiritual leader has the responsibility of instilling values, principles, morals, ethics, of shaping the lives and enhancing the wisdom of their devotees, their followers. A political leader is guided by principles, values, a system of governance, ethics, morals that should go into shaping the lives of those that he is or she is leading, and also contribute positively to changes in society. So then what is the difference,” the President reasoned.

He explained that the difference between the two comes because in politics there is competition internally and at a national level. This competition, he said, drives people to try to stay ahead of each other.

However, President Ali noted that in normalising the relationship and in achieving national unity, every Guyanese should fundamentally understand that “we must govern ourselves by certain principles and values that make up society”.

He added that there can be the “fiercest competition” but values must be established; which already exist in the country’s constitution.

The President added that the same efforts that Guyanese use to preserve their spiritual beliefs should be used to enhance the unity of our country.

“…We each play a role in safeguarding, just like this movement will safeguard the values and principles that guide your philosophy, your belief system, you will safeguard that. We also have an equal responsibility to safeguard the same values and principles that cements us as a society. So, let us be better humans to each other. Let us be a bit kinder to each other. Let us care for each other a bit more. Let us understand that a better neighbour, a strong neighbour, is better for us. A weaker neighbour creates greater vulnerability for us.”

Guyana ready to collaborate with UAE on climate change—President Ali