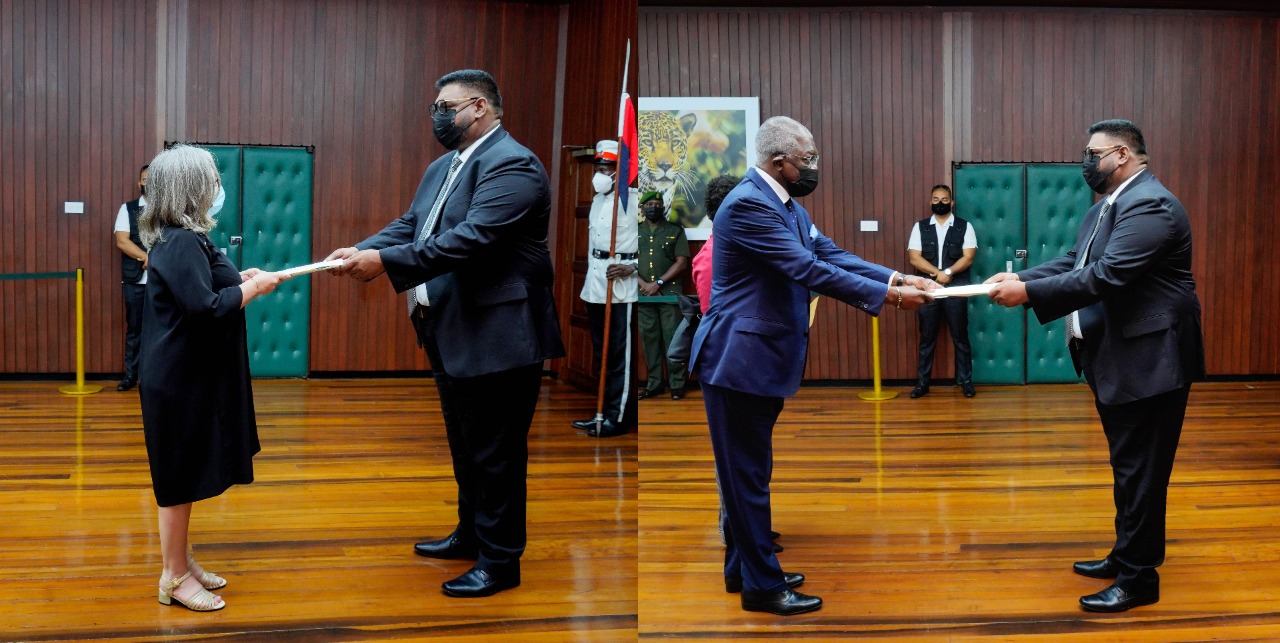 The two separate ceremonies took place at the Office of the President on Shiv Chanderpaul Drive.

President Ali accredited the Colombian Ambassador first and passed on his best wishes to the President of the Republic of Colombia, His Excellency Iván Duque Márquez and for the continued prosperity of the country’s citizens.

“We look forward to working with Colombia as a partner in championing various aspects and challenges to confront the issue of climate change.”

The President also told the Angolan Ambassador that he has noted the “admirable strides” his country has made towards sustainable development, especially the implementation of the Angola Energy Plan that is aimed at increasing access to renewable energy generation and use.

“Guyana shares a similar focus. My Government is in the process of refining its Low Carbon Development Strategy, which will be our blueprint for transforming our country’s economy along with a low carbon sustainable trajectory of development while at the same time promoting economic diversification. Our common aspirations in these and other areas provide the Co-operative Republic of Guyana and the Republic of Angola with the opportunity to share and exchange ideas, experiences and best practices.”

The President reminded that Guyana and Colombia have shared long-standing ties of friendship and cooperation and that both countries are equally committed to consolidating democratic values and norms, to promoting and protecting human rights and the rule of law, and to the economic and social advancement of citizens from both countries in a safe and secure environment.

He added that Guyana’s foreign policy is anchored in respect for the United Nations and international law, and respect for the sovereignty and territorial integrity of states. “We respect the sanctity of treaties and espouse the peaceful settlement of disputes.”

The Head of State emphasised that Guyana is strongly supportive of regional integration as a means of both country’s economic potential being realised, which will become more important in the post-COVID period.

President Ali added that the Government is “firmly committed” to strengthening the partnership that is shared with Colombia and to expand the scope of the relations in the economic, social, environmental and cultural spheres.

“Guyana-Colombia relations have advanced through our bilateral engagements. The Guyana/Colombia Joint Commission, established in November 1993, has served as an important mechanism in that regard. Guyana is especially grateful for the beneficial cooperation effected over the years, including in the areas of agriculture, culture, education, health, human resource development, language training, science and technology, sport and tourism.”

President Ali, in accrediting the non-resident Angolan Ambassador, conveyed warm greetings and sincere wishes for the continued personal well-being of the people of Angola and their President, His Excellency João Gonçalves Lourenço.

The Head of State said that the accreditation presents the opportunity for a new era in relationship between Guyana and Angola.

“You will recall that this relationship was founded on shared values, particularly in support of the African Liberation Movement.  Guyana looks forward to charting a new era in relations between our two States, with greater emphasis on economic cooperation.”

President Ali said that given that Guyana is now an oil producing State, the Government is prioritising the sound management of the oil and gas resources while promoting economic diversification.

“Like Guyana, Angola has similar objectives of economic diversification.  This commonality, I believe, can engender an active programme of bilateral economic cooperation between our two states, particularly in the areas of agriculture and agro-processing.”

At the end of the ceremonies, President Ali wished both ambassadors a successful tenure.