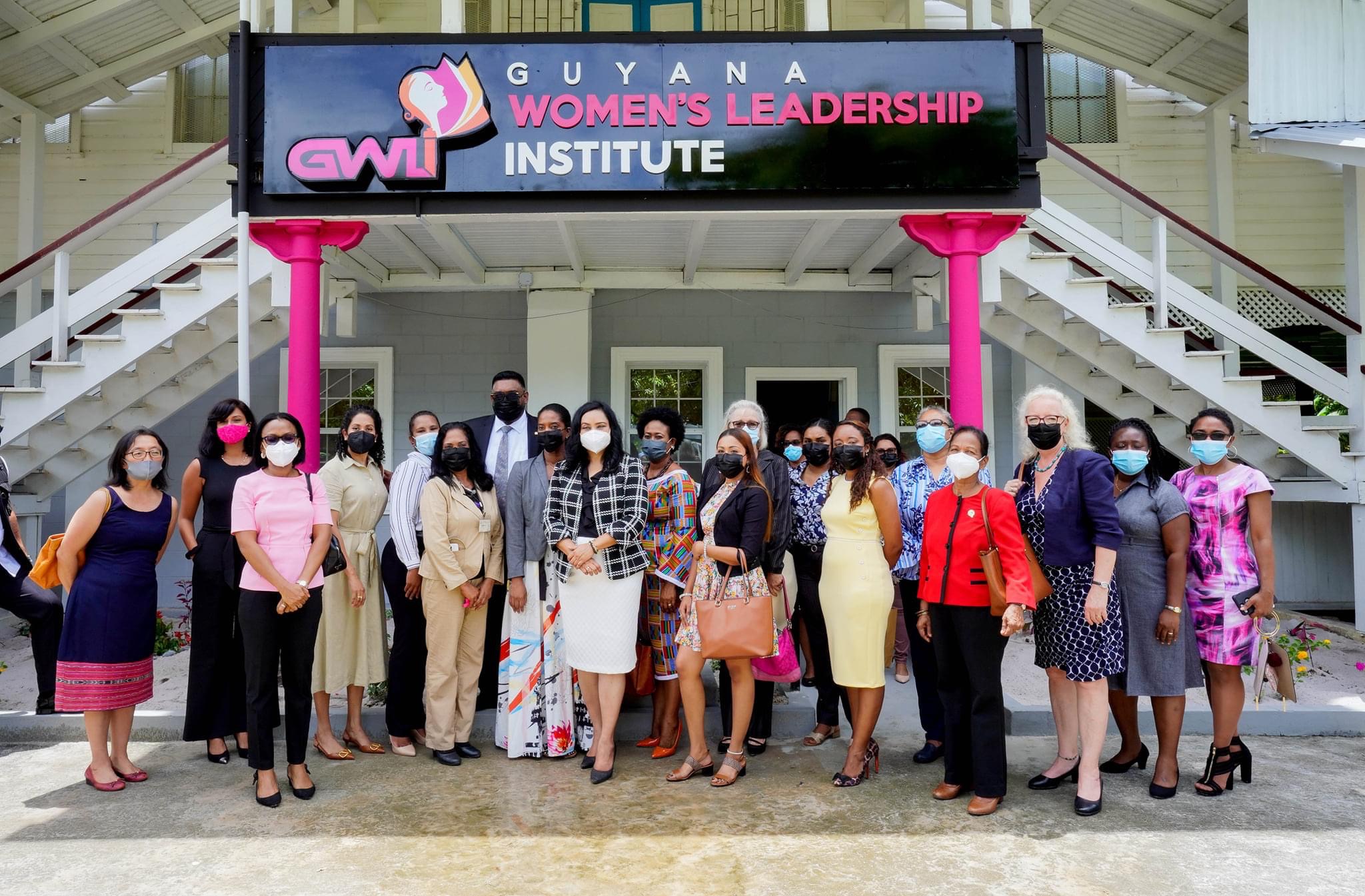 Georgetown, Guyana—(August 16, 2021) His Excellency Dr Irfaan Ali today stated that his Government, through its programmes and policies, is working to create a winning culture among Guyanese women.

In the feature address, at the launch of the Guyana Women’s Leadership Institute (GWLI) Business Incubator, at Cove and John on the East Coast of Demerara, the President highlighted the importance of equality.

He said that although more females than males graduate from university, this statistic is not often reflected in the world of work.

The President lauded the Institute and said that by adding ‘women’ into its name, it gave weight and drive to the organisation.  He added that the word brings a specific identity and a specific brand, which works to highlight the need for equality.

He explained that in our younger years, there is no differentiation. Yet, changes occur as we get older and that this competitive environment is designed and built in a particular way that is disadvantageous, particularly for women.

According to the President, there is a need to fix the transition process, which fuels the disparity between male and female entrepreneurs.

He said that this should be fixed at both the national level and by the international community.

ROLE OF THE PRIVATE SECTOR

The President pointed to the “critical” role that the Private Sector also plays in creating the environment for women entrepreneurs.

“The Government could provide all the opportunities; you get the education, but what happens afterwards? What environment is created to ensure that women are given that opportunity to raise capital, to get loans to be part of the business opportunities?  So that’s another point in the box that we have to address.”

President Ali added that dynamic changes are coming, and as such, he assured that his Government is striving to create a winning culture among women to be part of the transformation ahead.

On this note, he encouraged those present to recognise the need to transition to the expected level that will be required as part of the local content strategy.

“And that is why these programmes are critical to give you that early advantage. In ensuring your business model and development model addresses these key issues, and the brand that you’re building is built in such a way that is sustainable, that it is valuable and adds value.”

He also expressed the hope that the programme will also highlight the importance of working together to build businesses, corporations and networking.

“So in creating a winning culture in Guyana, we have to move from the ‘I’ concept to the more ‘we’ and ‘us’ concept. The changes that will come and the opportunities that will come will not be coming for ‘I’; it will be coming for us, all of us, and that is the direction in which we have to move. I want us to look at the opportunities and at how we create value. I want us to look at how we bring together initiatives.”

The President challenged participants to come up with ideas that they can pursue together once they have graduated.  Since the initiative is spearheaded by the Ministry of Human Services and Social Security, he acknowledged that it is the task of Minister Vindhya Persaud and her Ministry to find these opportunities and to ensure that the Institute would build capacity to match the opportunities.

In her remarks, the Honourable Dr Persaud noted that the female-centric business incubator at the GWLI will allow for the roll-out of the Women’s Innovation and Investment Network (WIIN), among other programmes.

WIIN is a massive programme by the Ministry of Human Services and Social Security that seeks to empower women and girls and help them become financially independent. Since its inception, 120 women and four men have benefitted from the WIIN initiative.

Minister Persaud added that there are over 4000 applicants for the WINN initiative from across the country.

I want women to start moving away from conventional types of employment to start to think like the bosses,” Minister Persaud said.

The GWLI will be the lead agency for all of these programmes. The Institute would also serve as the first business incubator, where women will have access to services to improve their products and skills, and be provided with links to markets.

She also announced that the Ministry has also created a cost-free digital directory and ‘app’ of all women-owned businesses in Guyana.

The Ministry will also facilitate training in innovative areas of study, including interior and graphic design, video editing, child and elderly care.

President Ali accompanied Minister Persaud and members of the Diplomatic Corps for the ribbon-cutting ceremony, which was followed by a short tour of the facility. The President was able to interact with some of the beneficiaries who were attending classes.

Minister of Tourism, Industry and Commerce, the Honourable Oneidge Walrond; EU High Commissioner to Guyana Fernando Ponz Canto and High Commissioner of India to Guyana, Dr KJ Srinivasa and other members of the Diplomatic Corps were also at the launch.