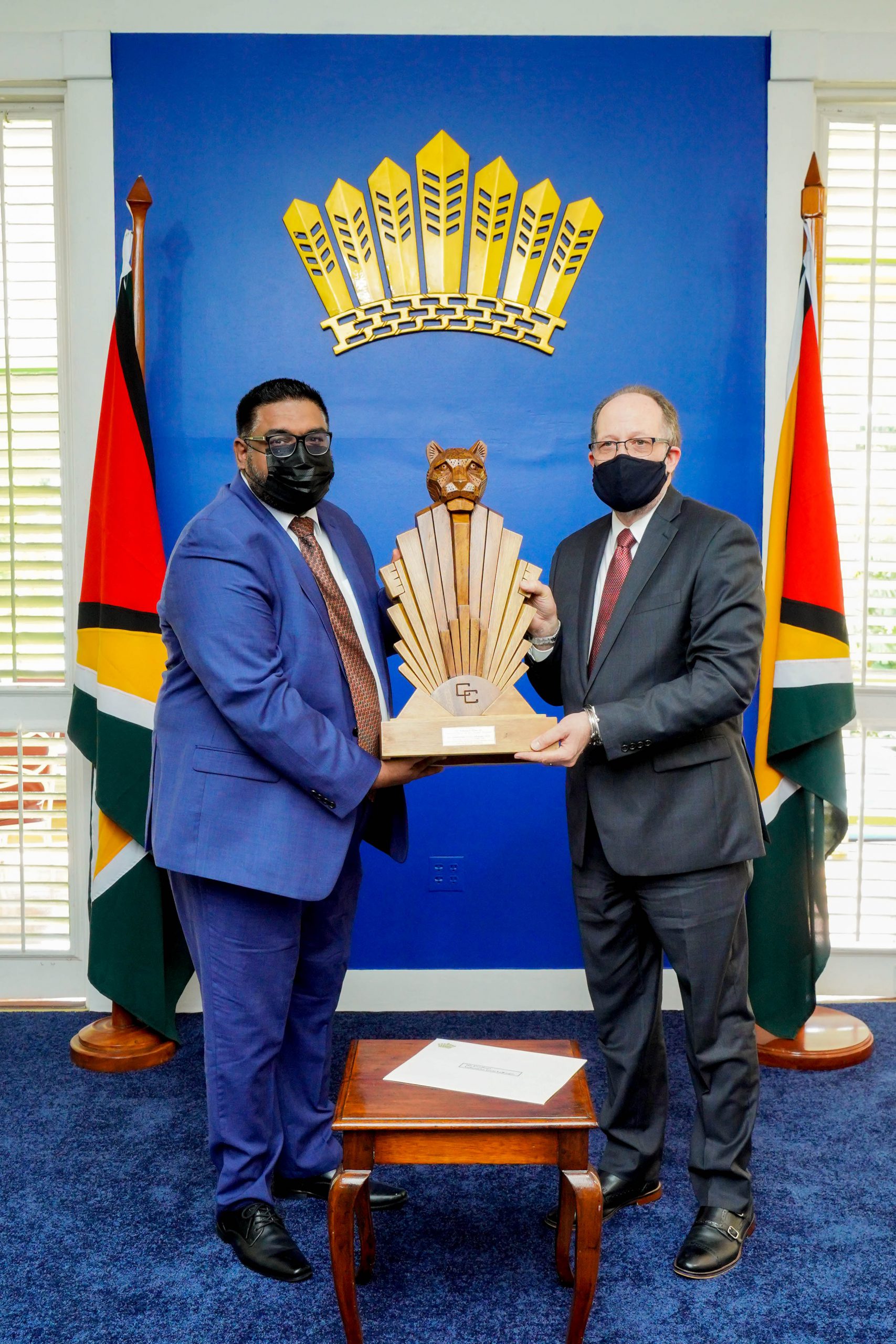 Georgetown, Guyana—(August 9, 2021) His Excellency Dr Irfaan Ali this afternoon told outgoing CARICOM Secretary-General Ambassador Irwin LaRocque that the region is stronger due to his stewardship and strength of character.

The Dominican, who has served two five-year terms, made a farewell courtesy visit to State House to meet with President Ali and Vice President Dr Bharrat Jagdeo.

In parting, the Head of State presented an exquisite piece of woodwork from renowned Guyanese sculptor Winslow Craig as a gift of appreciation on behalf of the people of Guyana for the decade-long leadership that Mr LaRocque provided at the helm of CARICOM.

The assorted wooden sculpture of Silverballi and Saman, which represents Guyana and the other 14 member states in the regional body, was specifically crafted for the Secretary-General.

“This piece is entitled Strength and Wisdom. It is my pleasure on behalf of the people of Guyana to hand over this piece to you,” the President told Ambassador LaRocque.

“This is recognition, first of all, for your regional commitment, your leadership, strength of character, your wisdom and the prolific way you led …. Indeed, the region is stronger and better because of your service.”

President Ali said that Guyana is honoured to have benefitted from the outgoing Secretary-General’s “stewardship” and expressed the confidence that many persons, as well as communities with whom he interacted, would have also benefitted from his wisdom, love, and his commitment to humanity.

“I am sure you and your family will have fond memories of Guyana. But we want you to know that the people of Guyana welcome you and see you as a Guyanese; after all, we are one CARICOM people.”

Ambassador LaRocque thanked the President for his kind words and the gesture extended to him.

Dr Carla Natalie Barnett, a native of Belize and the first-ever female CARICOM Secretary-General, is expected to assume office next week.  She was unanimously selected by the CARICOM Heads of Government in May.