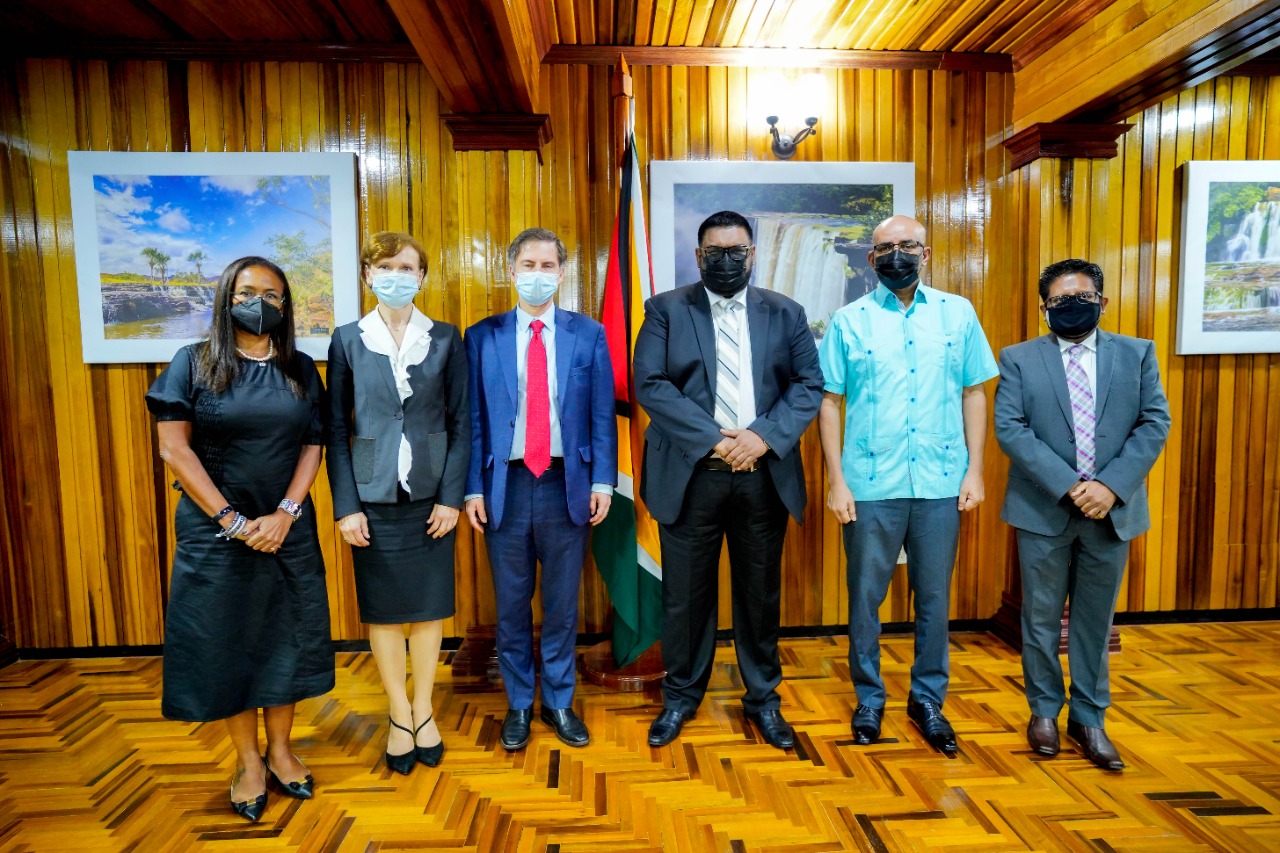 The visiting high-level team was led by the World Bank’s Vice President responsible for Latin America and the Caribbean, Mr Carlos Felipe Jaramillo and the Country Director for the Caribbean, Ms Lilia Burunciuc.

The Head of State stressed that while the oil and gas sector is important, it will not be Guyana’s sole sector moving forward. He said that funds will be used to help strengthen other sectors, including tourism, agriculture, educational services for export, health services for export, ICT, environmental services, industrial development and manufacturing, among others.

President Ali said that the most inhibiting factors to growth and development in the country are the cost of energy and the country’s human resource capacity—both of which, he noted, the Government is aiming to enhance.

To this end, he said that the Government wants a “dedicated funding partner for education”.

The President told the group that the Government is pursuing an energy mix of solar, wind, gas and hydropower to ensure energy sustainability and reliability, which in turn will also reduce the cost of energy by 50% before the end of 2024.

“This will bring us closer to being very competitive in the region to support development in manufacturing.”

The Head of State also explained that while there are opportunities in the oil and gas sector, there are also massive opportunities in other sectors like agriculture. He pointed to the recent public-private partnership by a consortium to grow soya beans and corn with the intention of providing the local livestock sector with feed that is usually imported.

This, he said, will save millions of US dollars and is in line with CARICOM’s goal of 25 by 2025—a plan to reduce importation in the Caribbean region by 25% in the next four years.

Mr Jaramillo said that the World Bank is very pleased that the Government has clarity and consistency as it relates to its development plans.

He also stated that the visit to Guyana has left the team impressed as it relates to the country’s emphasis on the expanded LCDS, human resource capacity and educational development, the Government’s handling and response to the COVID-19 pandemic and its focus on involving the private sector in its progression.

The World Bank officials also applauded President Ali for the Government’s aggressive and ambitious vaccination programme. Mr Jaramillo specifically highlighted the vaccination rates, which he stressed is one of the best in the region, and the Government’s creativity by having drive-thru vaccination options, among other initiatives.

The visiting officials also explained that they are concerned with the strain the pandemic will put on the education sector and agreed to put education at the centre of discussions.