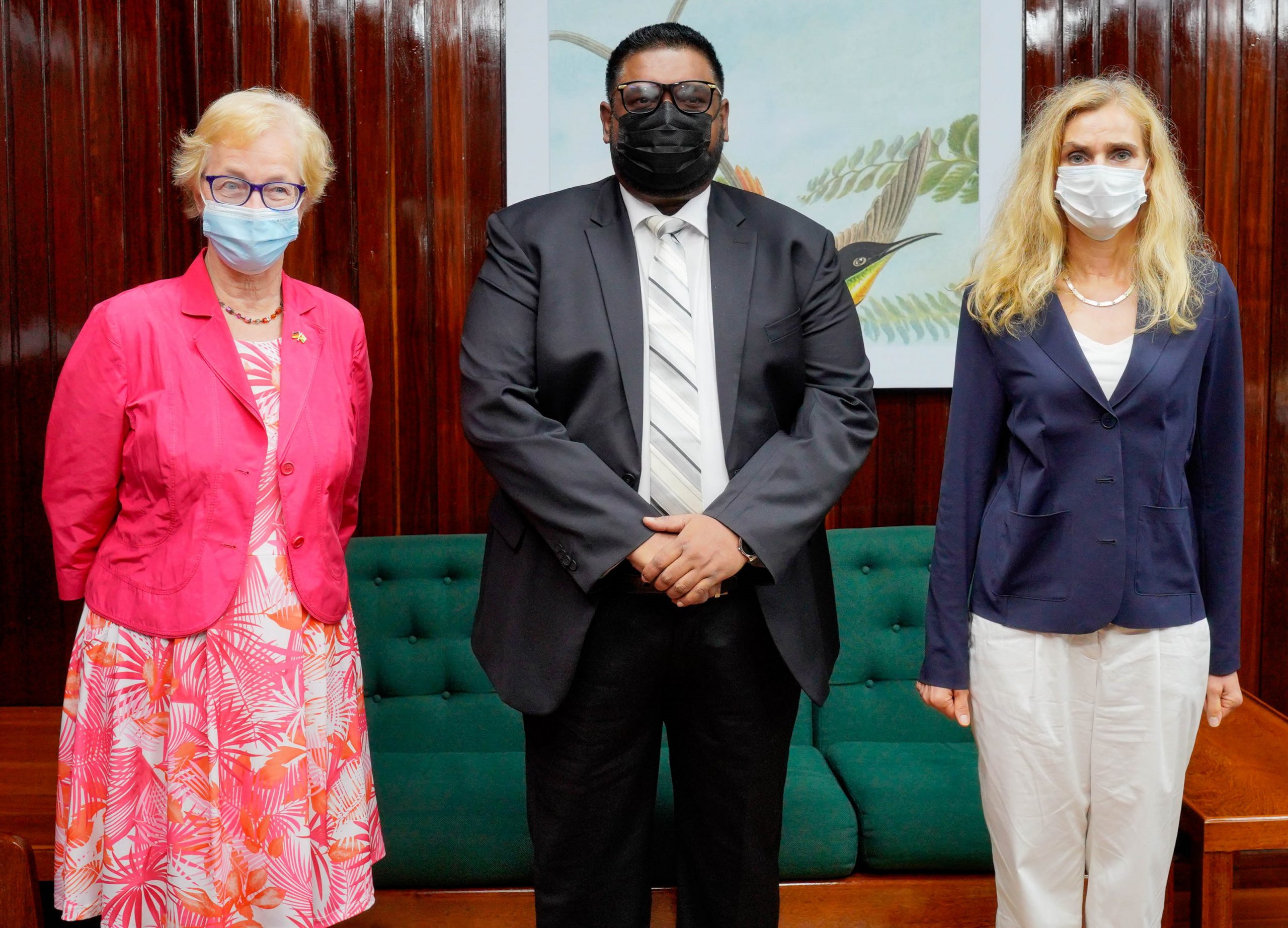 Georgetown, Guyana— (August 4, 2021) His Excellency Dr Irfaan Ali today reaffirmed his commitment to advancing bilateral relations with Germany and the European Union (EU) and it was reciprocated by visiting ambassadors from the European nation.

The Head of State made this assertion at his office, during a courtesy visit by Ambassador and Regional Director for Latin America and the Caribbean from the Federal German Foreign Office, Her Excellency Marian Schuegraf, and German Ambassador to Trinidad and Tobago, Her Excellency Ute König.

The President outlined his transformation agenda for the country and emphasised that the oil and gas sector is not the main staple of the economy since his Government is working on diversification to enhance existing sectors and to create new opportunities.

“It will ensure that our people have access to world-class healthcare, a world-class education system while providing a housing initiative that is sustainable, and one that will not only build homes, but create equity especially among low-income earners.”

High on the agenda was also providing leadership on climate change.

President Ali noted that historically, Guyana has provided leadership on this front, while pointing to the expanded Low Carbon Development Strategy, upon which our development is framed.

He further explained that Guyana is also investing heavily in food security, which is especially important for the region given our vulnerability to natural disasters.

President Ali pointed to the recent floods in Guyana, Suriname and parts of Brazil and the resultant losses, and also empathised with Germany over its recent floods.  He attributed these occurrences to climate change which he noted should bring greater realisation for the urgent action required.

The Head of State also recognised Germany as a leader in alternative energy and disclosed that his Government has received proposals, with regards to solar energy and investment in transmission, from persons of German heritage.

On this note, he emphasised that sustainable energy is also an important part of the mix and is a key component in Guyana’s development.

“So I’m very happy that you’re here at this time; and we have an opportunity to listen to you and to discuss what to engage on.”

In her remarks, Ambassador Schuegraf expressed gratitude for the audience with President Ali and the opportunity to learn about Guyana and its policies.

“It’s a great pleasure to be here to get to know more about Guyana as a country but also about its policies. I think Guyana could be more present on the EU’s and Germany’s radar and we are here to change that.”

She acknowledged Guyana’s stellar efforts in “leading in the world when it comes to untouched forests” which she stated is “a treasure also for future generations”.

“I am particularly delighted on meeting you as President here, seeing that you’re so much committed to the environment. This is something which is great for Germany.”

GUYANA AS A BEACON

“I learned about your Hydrocarbon Strategy and about your sustainability plans and I see this being supported on the highest level, this promises to be a development which could be a beacon and big signal in the whole region, not only for cooperation with Germany or the EU, this is a great basis.”

Ambassador Schuegraf also lauded Guyana’s efforts to safeguard its biodiversity while at the same time utilising its natural resources (hydrocarbons).

“…That is so important for other countries also in the region, to show that the development for people is possible while preserving the natural treasure and exploiting the richness. So, therefore, the region and also Europe will look on you and how you deal with that issue.”

On this note, President Ali pointed to the importance of the 26th UN Climate Change Conference of the Parties (COP26), in Glasgow later in the year, and expressed the hope that Germany and the EU can push the agenda for the developing world in terms of the creation of climate vulnerability funds, and also for the greater commitment in targets.

“So we’d have to have a greater commitment for realistic targets. So I think the EU and Germany as part of the EU, you guys have a great responsibility also. We look forward to working with you.”

The President said that he was pleased with the meeting and the interest shown.

“There is so much we have to work on together…You can count on Guyana to play our role in global leadership in terms of the environment, making responsible decisions and being part of a responsible coalition to face challenges,” President Ali said in closing.

Ambassador Schuegraf assured the President that she would pass on the information discussed to her colleagues and Government Ministries in Germany and expresses optimism at intensifying bilateral relations between her country and Guyana.