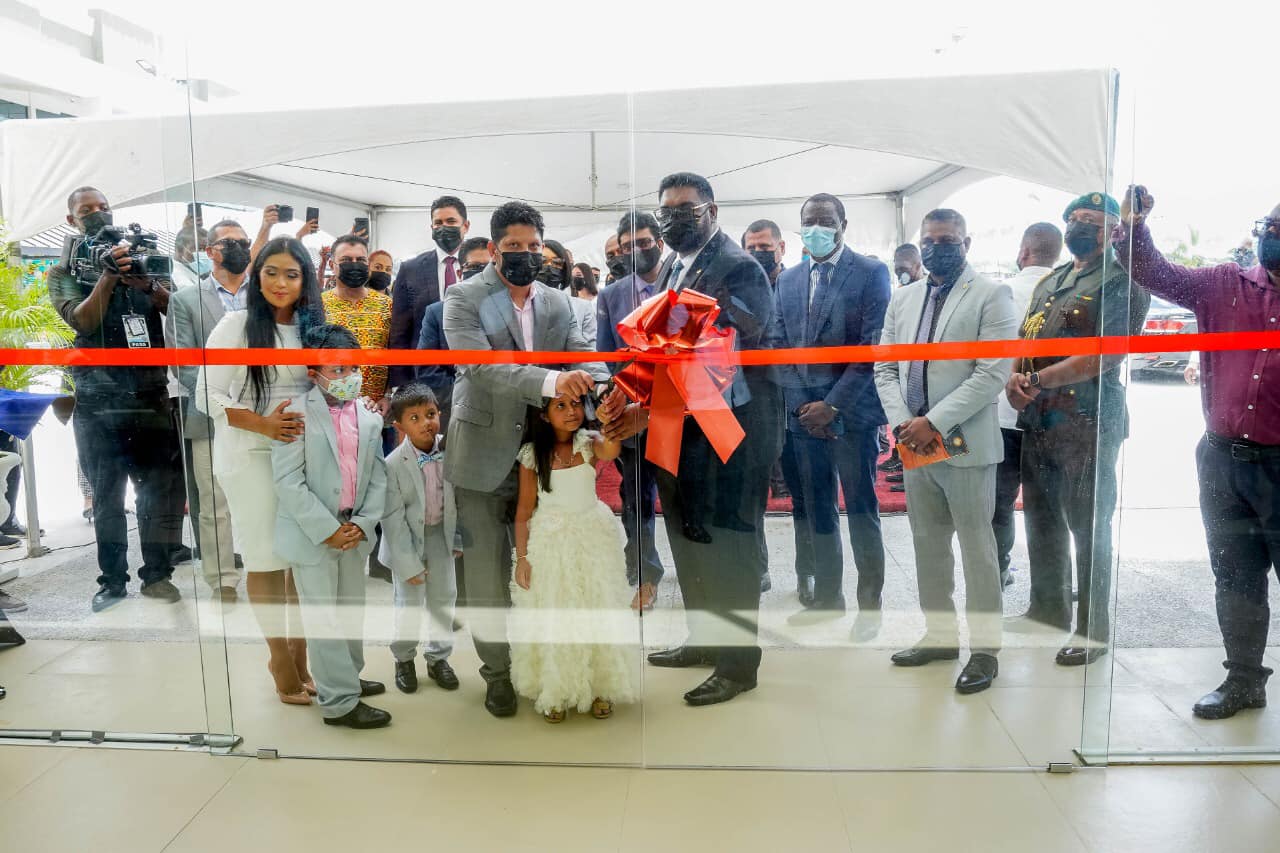 Georgetown, Guyana—(July 30, 2021) His Excellency Dr Irfaan Ali said that the new Guyana that his Government will create requires business owners and operators to step outside of their comfort zones and to be innovative with their investments.

He implored the business community to take advantage of the opportunities available and again called for them to form themselves into consortiums to benefit from large-scale investments.

The Head of State made these comments during his address at the grand opening of the Amazonia Mall in Providence on the East Bank of Demerara.

The Mall, which is owned by former Guyana and West Indies cricketer Ramnaresh Sarwan, is expected to employ almost 300 persons and function as a recreational hub for Guyanese living in the vicinity.

According to President Ali, Sarwan’s achievement embodies the visionary action that Guyana needs. He said that the Mall will not only enhance the community but the entire East Bank.

“The new Guyana we want to create and we will create, requires bold thinking, visionary action, fearless decision making.”

President Ali said that the grand objective of the Government’s development trajectory is to ensure that every Guyanese has “an equal opportunity in the future”.

“Guyana is on the rise, we are rising rapidly. There is no second-guessing. What we have to do is to ensure that every Guyanese is a part of the development process to rise, to build, and to be part of this future. That is what we have to ensure.”

DEVELOPMENT OF THE EAST BANK CORRIDOR

President Ali reflected on the rapid development of the East Bank corridor over the years and recalled the criticisms levelled when then-President Dr Bharrat Jagdeo had earmarked Providence as the location for the National Stadium and for an international hotel—now called the Ramada Georgetown Princess Hotel.  In addition, the President added that some were not too keen on the original housing development of the area.

“The banks are here, let them tell you the value of those lands now.”

He said that his Government will continue to push development and is speaking and working from a “proven track record”.

There are close to 18,000 house lots, excluding the commercial zones, between Eccles and Diamond. The President said this is a result of careful planning and an understanding of the development trajectory of the country.

The Head of State also reminded the gathering of major infrastructural works that the Government is currently undertaking with the aim of building a modern society.

He said that a modern Guyana should not be one where citizens have to endure hours-long traffic jams, which are counterproductive and inefficient.

“That is why we are confronting this challenge head-on.”

President Ali reminded those present of the recently completed two-lane access road from Diamond to Mocha, within his first year in office. He also reminded that his Government is in the process of constructing a four-lane modern highway from Mandela to Eccles and will complete the design of its continuation to Diamond next week.

Government is also currently in the final stages, with the assistance of the Indian Government, to contract and commence initial works on the highway from Ogle to Eccles. Senior Minister within the Office of the President with responsibility for Finance, The Honourable Dr Ashni Singh, has commenced negotiations to get financing to extend the road from Eccles to Diamond and then all the way to Timehri.

“This is the vision, this is the type of infrastructure that will not only open up new lands but will open up new opportunities for people in this country.”

The President added that hundreds of acres of commercial and industrial land will become available due to the development of the roadways and will give citizens more opportunities at land ownership.

WORKING FOR ALL GUYANESE

The Head of State also stressed that the Government is assessing innovative ways to tackle imported inflation by working to find avenues and policies that can help all Guyanese, especially low-income earners.

“We are working with local, international and regional financing institutions to see how financing can be structured. To see where we can get the best possible development financing package for Guyana.

President Ali also noted that in the last year, the Government has seen the growth of many local businesses that are now going into fabrication and logistics, among other areas. To complement this and other developments, the President said that the Government has already turned the sod for three new hotels and are in the closing stages to have another three top international branded hotels in the country, with at least two more local brands by the end of the year.

“This is the type of development that is taking place. We don’t scream about it every day in the newspaper. But this is the transformation.”

The Head of State also assured the Tourism sector that it will get “personalised attention”.

“We are going to invest in tourism. Tourism is an important part of where our country is going. There is a lot to be done. There is a lot that must be done in creating this modern, culturally rich Guyana.”

President Ali also announced that the Government is working on a website that is similar to the world-renowned Amazon. The project will be hosted on the site www.stabroekmarket.com and will allow “every single small operator, small entrepreneur” to market their products to the rest of the world.  He is hoping to launch the project by September.

“Once that is launched, our honey, our beauty products, all the facilities we offer as a country, our indigenous people, women entrepreneurs, they will have an opportunity to join a market that gives them access to the rest of the world.”

The Head of State said that the mix of development and initiatives is what is necessary to take the country forward. He said it will ensure that development is done in a way that does not expand inequality but will bridge the gap.

The President also urged Guyanese to “rethink our individual position in society and put Guyana first”.

“Let us change the mindset, let us reset the clock, and let us rethink our individual strategy in working towards the collective vision.”