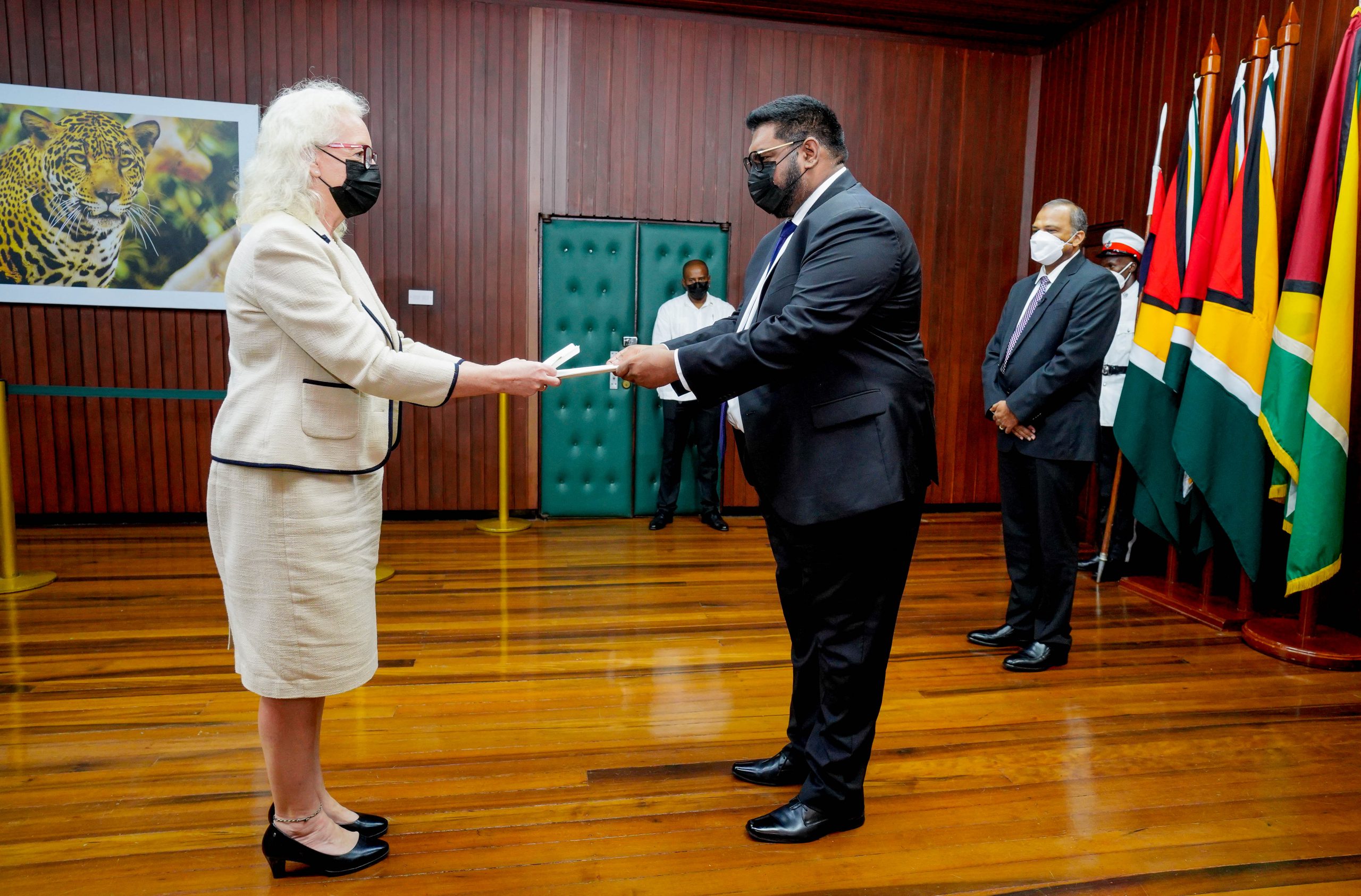 Georgetown, Guyana— (July 20, 2021) His Excellency Dr Irfaan Ali this morning accepted the Letters of Credence from Mrs Jane Miller (OBE), accrediting her as High Commissioner Extraordinary and Plenipotentiary of Great Britain to Guyana.

The Head of State was joined at the Office of the President for the simple ceremony by the Minister of Health, the Honourable Dr Frank Anthony and the Permanent Secretary of the Ministry of Foreign Affairs and International Cooperation, Mrs Elisabeth Harper.

In accepting the Letters of Credence, President Ali welcomed Mrs Miller, the first female Great Britain High Commissioner to Guyana, and stated that the countries have long-standing ties of history and share similar values for the respect of human rights and democracy.

He said that since attaining Independence in 1966, Guyana has shared a strong relationship with Great Britain.   He also credited the European nation for being “unwavering in its support for Guyana’s sovereignty and territorial integrity”.

The President, in his remarks, commended the United Kingdom of Great Britain and Northern Ireland (UK) for its role last year in defending Guyana’s democracy.

“I must once again restate the sincere appreciation of my Government for the role which the United Kingdom played last year with its principled stand for the preservation of Guyana’s democracy during the impasse in the announcement of the results of our general and regional elections.  My administration is committed to sustaining democratic rule in Guyana.”

The President said that Great Britain has been supportive of Guyana’s development efforts through numerous programmes of cooperation, including debt relief, education, water supply, restructuring of the sugar industry, public sector reform and strengthening of the judiciary and law enforcement agencies.

He also applauded its continued support of Guyana’s economic development, including its assistance to strengthen our infrastructure.

“I assure you that Guyana is deeply committed to continued collaboration for the progress of both of our peoples.”

Similar sentiments were expressed by the new High Commissioner, who noted that the links between the two countries are strong and will be further strengthened “to the benefits of both countries” during her time in office.

High Commissioner Miller praised President Ali’s stance on climate change and pointed out that it was also at the forefront of the agenda of the Prime Minister of the UK, Boris Johnson.

She applauded the President for his efforts in 2021 on climate change, including the signing of both the Leaders’ Pledge for Nature and the Global Ocean’s Alliance.

“Both of these are key milestones, as we work together on sustainable options for a cleaner and safer environment for our children.”

President Ali said that it was important to work together to “seize the opportunity to match political will with action” in the fight against climate change.

He said that he was confident that the 26th UN Climate Change Conference, to be hosted in Glasgow in November, will give greater consideration to the concerns of small-island developing states and low-lying coastal states.

“This Conference represents a watershed moment for the discussions on climate change.”

Guyana, he noted, is taking meaningful action to contribute to global efforts to address “this existential crisis”.

“My Government has advanced its work to revitalise our Low Carbon Development Strategy.   Guyana’s future actions in this area will place great emphasis on the protection

of our environment, the preservation of our biodiversity and the promotion of renewable energy and measures to ensure climate adaptation.”

High Commissioner Miller said she was delighted with some of the British-financed programmes, including the SMART Hospital Initiative.

She also applauded the President for his “determined effort to roll out vaccines across the country” in the fight against Covid-19 and on him applying to join the Media Freedom Coalition.