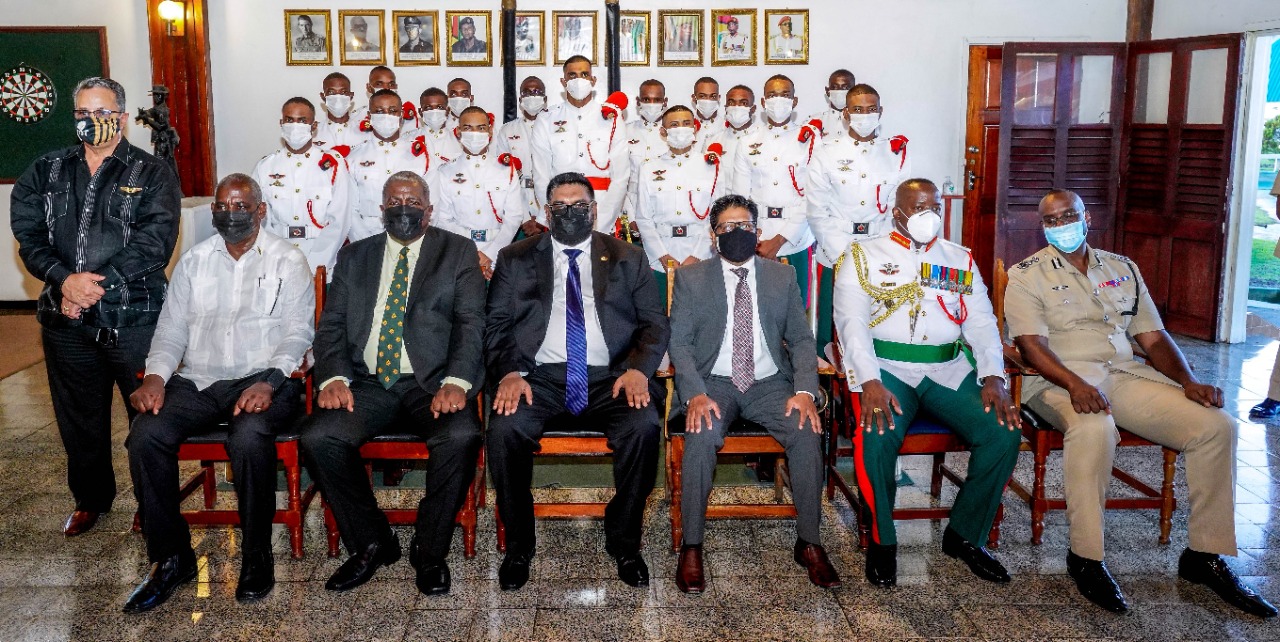 Georgetown, Guyana (July 20, 2021) His Excellency Dr Irfaan Ali said that the Guyana Defence Force would play an integral role in the development of a National Disaster plan to help protect Guyanese and the country’s resources from the effects of climate change.

The Commander-in-Chief of the Armed Forces made the disclosure while addressing graduates of the GDF Standard Officers’ Course 52 at Base Camp Ayanganna.

The ranks were told that in addition to securing the country’s territorial integrity, the GDF will play a bigger role in civil protection.

The President said that this proves that the GDF is suited to support civil protection, disaster preparedness and disaster response operations now and in the future.

He referenced his address at the recently concluded Annual GDF Officers’ Conference where he highlighted that the National Defence Policy will see greater involvement of the Guyana Defence Force in search and rescue operations, disaster response, provision of infrastructural services, in the defence and protection of border communities, in medical outreaches, in response to medical emergencies and in coaching and honing the talents of our athletes.

“Guyana has no control over the forces of nature.  However, we can mitigate their effects and plan to better protect our people and assets. In this regard, Guyana will develop a comprehensive national disaster prevention, preparedness and response plan to help protect our people and our resources from natural and man-made disasters. The Guyana Defence Force will have an integral role in developing and giving effect to this plan.”

The new task, would not diminish or detract attention from the GDF’s primary mission of protecting the country’s territorial integrity and defending its national sovereignty.

The President noted that while climate change will not disappear and the world hopes that another pandemic will not occur, the GDF must always be ready for any eventuality. He said that most of the non-traditional threats are not unique to Guyana, and as a result, the country would continue to build partnerships to collaborate and cooperate in combating and mitigating all threats.

“This is your Force and these are the circumstances under which you are being inducted as officers of the Guyana Defence Force. You will be expected to lead the efforts in defending our country’s territory, in protecting its national patrimony and the safety and well-being of its people; and in supporting our Caribbean brothers and sisters who may be affected by disasters.”

The Head of State added that the participation of other countries in the course is indicative of Guyana’s commitment to defence cooperation. He said this is also evident by Guyana’s recent hosting of Operation Tradewinds 2021—which also highlighted the country’s commitment to building the capacities of its neighbours’ respective defence forces.

“Guyana will continue the long tradition of welcoming officer cadets from our sister CARICOM states to train alongside our officers of the Joint Services.”

President Ali charged the graduates to be prepared for life’s future eventualities through knowledge, commitment, respect and discipline. He told the ranks to be steady, focused and unwavering in the principles and values of their oaths.

“As you embark on your new careers as officers in your respective services, it is expected that you will exemplify the highest standards of discipline, excellence, professionalism and leadership.  Your mission is not simply to lead but to make a difference through your leadership.”

The President charged the graduates to uphold the constitution, respect the law and to remain worthy of their uniforms.

Mohamed was awarded the Sword of Honour as the best graduating student while Smith received the best international student award. The best drill went to Batchelor, best military knowledge to Abrams, best shot to Smith and best fitness to Cucul.

Menu of measures being considered to further help Guyanese—President Ali