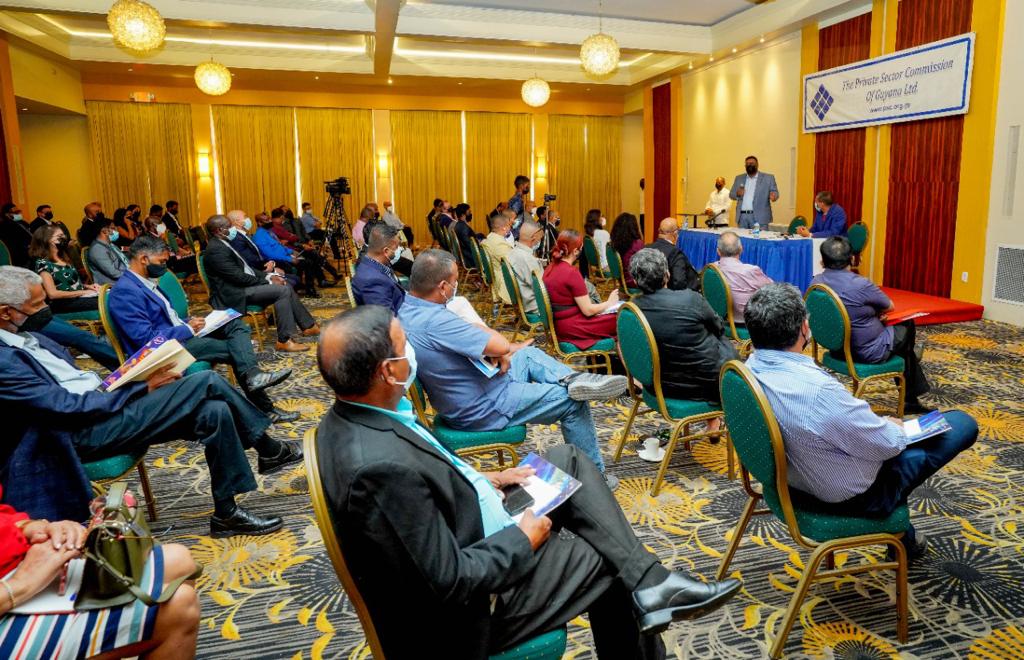 His Excellency Dr Irfaan Ali on Wednesday evening said that public-private partnerships are integral to the progression of Guyana and should be the cornerstone of development going forward.

The Head of State pointed out that partnerships need not only be transactional or project ties but should become more established.

The President’s appeal was part of an address to a Private Sector Commission (PSC) business forum held under the theme ‘The Private Sector in an emerging Guyana’ at the Pegasus Hotel.

Moving forward, regular engagements between the two bodies are extremely important, according to the President.

“It’s very important that we reach at a forum like this to bring all our thoughts together and deal with the multifaceted nature of the challenges that we face.”

The audience was reminded that the Government is pursuing a development agenda that caters for strong local private support, which will, in turn, benefit all citizens.

“There is no apology about this policy. Any company that is operating here must understand that they’re operating here not only for their own profit, which is important, which is fair but also for the development and advancement of Guyana and Guyanese— that is critical.”

This structure, the President noted, is not only for the oil and gas sector but for all other sectors in the country.

The Head of State also gave an update on Government’s robust infrastructure development plan. He said that these big projects, including the four-lane highway from Mandela Avenue to Diamond; a new four-lane highway in the West Demerara region; and six additional lanes along the East Coast of Demerara, will open thousands of acres of land for development.

He said this would result in other major infrastructural development, including an industrial site on the East Coast of Demerara and an industrial zone for the oil and gas sector at Wales on the West Bank Demerara in the Wales Development Authority.

“What we’re hoping to achieve is, if not total, close to total local involvement and local private sector involvement in this development. And that is why understanding the scale of what Government is going to do is so important.”

The President stressed that the local private sector must always be part of the equation as we advance.

“So, any company coming in to invest must understand that they have to rap at the door of the local private sector here too, and involve you in the process going forward. But do not expect the Government to spoon-feed opportunities. We have to work and make the policy known, but you also have to be aggressive.”

The gathering was also reminded that the Government is working to significantly increase the ease of doing business by way of a Single Window Approval System.

The forum was attended by members of the Private Sector Commission along with representatives from various Chambers of Commerce from across the country.

After his address, the President and Vice President responded to questions. Participants were able to seek clarification on various matters including, access to finance for micro, small and medium-sized businesses, capacity building to increase the technical capabilities of the workforce, the importance of regional development, the strengthening of local content, and the creation of public-private partnerships.

The PSC Business Forum’s aim was to sensitise the business community on plans and opportunities within the various sectors in Guyana.

In introductory remarks, Chairman of the PSC, Mr Paul Cheong noted that the private sector is committed to working with the Government to advance development within Guyana. He underscored the importance of the private sector as a strategic partner in promoting economic growth and collaborative work within several sectors including, agriculture, energy, and infrastructure.

The Chairman endorsed and commended the work done by the Government and reaffirmed the PSC’s commitment to collaborate in building a brighter and more prosperous Guyana.