The Head of State said he outlined with “great clarity” the vision for Guyana and the Government’s macro plans, as well as “what it is we believe the bank can do to meet the challenges that face not only Guyana, but the region”.

The President said that he shared disaggregated information relating to the Government’s vision on various sectors and for future projects that are necessary to move the country forward.

Calls were also made for more information to be made available to the private sector to help them understand the bank’s existing opportunities, and for “a reform within the bank itself” to cater to the developmental needs of the region.

The Guyanese team of Government officials emphasised that the Bank has an important role to play in supporting private sector development not just in Guyana, but throughout the region.

The President has been adamant that the Government would support private sector initiatives, especially when it comes to developmental projects.

This viewpoint was expounded upon by Dr Singh, who noted that the private sector is earmarked to play key roles in Guyana’s future.

“…We have been speaking about things like public-private partnerships for some time. We are hoping to be able to see private financing play a bigger role including in infrastructure projects. And then of course the role of the private sector in investing in the productive economy.”

According to the senior Minister, today’s discussion can be viewed against the backdrop of Guyana’s role not only as a borrower and a beneficiary of the Bank, but as a shareholder in the bank.

He explained that a brief history of the Bank’s engagement in Guyana, including support for a number of developmental projects, especially through the Bank’s Basic Needs Trust Fund facilities were also discussed.

Conversations also focused on issues surrounding climate change, the environment, the energy sector and the national development priorities of Guyana and other Caribbean nations.

Dr Singh said that overall the exchanges were “very forward-looking,” not only the articulation of Guyana’s development agenda, but through shared ideas on the Bank’s future in the region.

“…It was a very forward-looking conversation about the future direction with the bank and potential opportunities for the Bank. We shared some thoughts on the bank’s continued important role in the region’s landscape.”

Giving an insight into the meeting from the CDB’s perspective, Dr Leon said that the discussions were “very constructive” and underscored how the Bank and Guyana would sustain their great relationship.

“We touched on a number of topics that are of common concern now in the region in terms of its development and how the Bank can hopefully assist in that particular direction.”

Dr Leon, who is on a two-day visit, plans to next meet with the CDB’s key interlocker in Guyana—the Ministry of Finance—as well as other Government agencies. He also intends to visit some projects that the CDB would have facilitated over the years and possibly engage, informally, with the private sector.

The visit to Guyana by the CDB President is the first stop on his trip around the Caribbean since taking the reins of the regional multilateral institution in May. 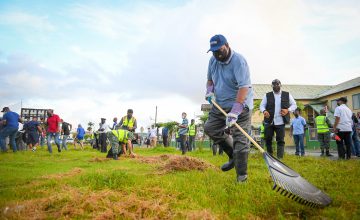