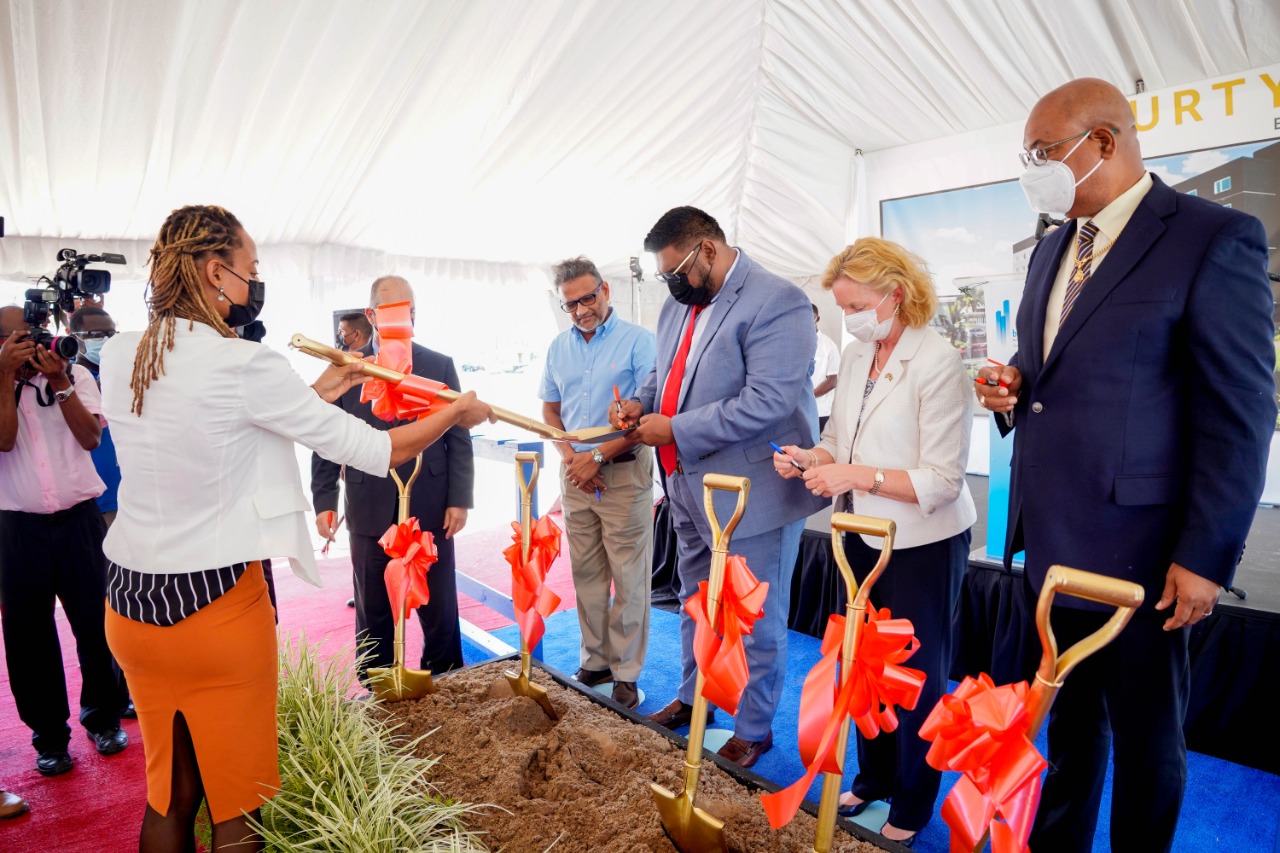 Georgetown, Guyana (July 2, 2021) His Excellency Dr Irfaan Ali said that he is happy that more Guyanese are coming to the fore to take advantage of the conducive business climate and see the need to create ownership as the country continues to progress.

The Head of State said that the vision to see the opportunities and the zest to put systems in place is the hallmark of ingenuity.

He made these remarks earlier today during the official Sod-Turning Ceremony of the Courtyard by Marriott, which will be built within the Cheddi Jagan International Airport (CJIA) compound at Timehri.

The President pointed to the significance of the event while lauding the Bassoo family for their foresight and delivery. He said that today’s event was “an example of a vision that was announced very early” and one in which ownership was taken.

“It is no surprise to me that this family has stepped up in such a major way to answer the development call of our country.”

This is the second US branded hotel sod-turning ceremony in the last year and the second that is pursued by a Guyanese family-oriented business.

This, according to President Ali, tells a story that the business culture is beginning to accept that the time has come to transition from family-owned businesses.

“I am happy that the Bassoo family again is playing a key role in this transition.”

Since coming into office, the President has called on Guyanese family-owned businesses to form consortiums to benefit from the large-scale development that is expected over the next decade.  He told them that they need to pool their resources together to be able to compete against international companies.

The President also credited the US for its solid support.

“That is why I am so happy that Ambassador [Sarah-Ann] Lynch is here …partnership in this vision is critical for developing countries. This is a US brand. We have seen over the last year great enthusiasm from investors all across the world, especially from the US.”

This enthusiasm, he posited, has a lot to do with the leadership that exists in the US Embassy and the great help that the Government receives in promoting that vision outside the borders of Guyana.

“I want to pause here to recognise all those who take ownership of the vision and are partnering with us in realising the vision.”

President Ali said that there has been major interest shown by investors in various projects in the vicinity of the airport.

“We have now more than 40 international investors that are knocking at our door for different investments in the airport. For a matter of fact, I must inform that airport authority is short of land to facilitate these investments. So not only are we seeing the realisation of a hotel, but we’re seeing the realisation of a new urban spread around the airport.”

He said too that the area is also poised to become a major hospitality, leisure and sports recreational area.

“So, you will see government itself investing billions of dollars over the next five years in the catchment area.”

The President again mentioned the development of Silica City and the type of infrastructure that will surround the new city.

He then appealed to potential investors who are looking to establish high-end businesses including a first-class marina, boating opportunities, a yachting club and a world-class resort along the Linden- Soesdyke Highway to come onboard.

He pointed to the infrastructure projects which will support these investments, including the new superhighway connected to the city.

He revealed that during Cabinet deliberations yesterday, they reviewed the Government expenditure portfolio and profile and examined the critically needed investment to transform the country and realise the opportunities.

“Just to let you understand how important this is, for the remainder of this year, with the supplementary [budget], Government will be investing close to $500M every day, close to $500M of capital expenditure every day in projects and programmes across the country. This is what creates opportunities and wealth.”

He encouraged any Guyanese with a plan to come forward and be assured that the country is open for everyone. The Government will invest in ensuring that all have access to existing opportunities, particularly in the vicinity of the CJIA.

On this note, the President assured Mr Bassoo that the type of investments that will be created around the area will only add to the success of his project.

He further stated that the Government is focused on creating opportunities for the private sector and then working with them in translating the benefits of those opportunities to the wider population.

The President assured the Bassoo family that by the time their project is completed, coupled with the other planned investment in the surrounding areas, Government will be moving closer to the type of network development hub and growth pole planned for the area. On this note, he pointed to the many stakeholders who are working assiduously, including Go- Invest, Ministry of Infrastructure, Ministry of Finance, and the Ministry of Tourism, Industry and Commerce and the management of the CJIA, among others.

“So very soon you will see many other facilities like this, but today we stop to celebrate with the Bassoo family, with Marriott, with all the stakeholders on this momentous occasion. I congratulate you, I wish you well, and I give you the full commitment of the Government of Guyana in supporting the full realisation of this project.”

Courtyard by Marriott is a brand of hotel owned by Marriott International.  In Timehri, the 140-room six-storey hotel will be designed for business travellers, but will also accommodate travelling families.