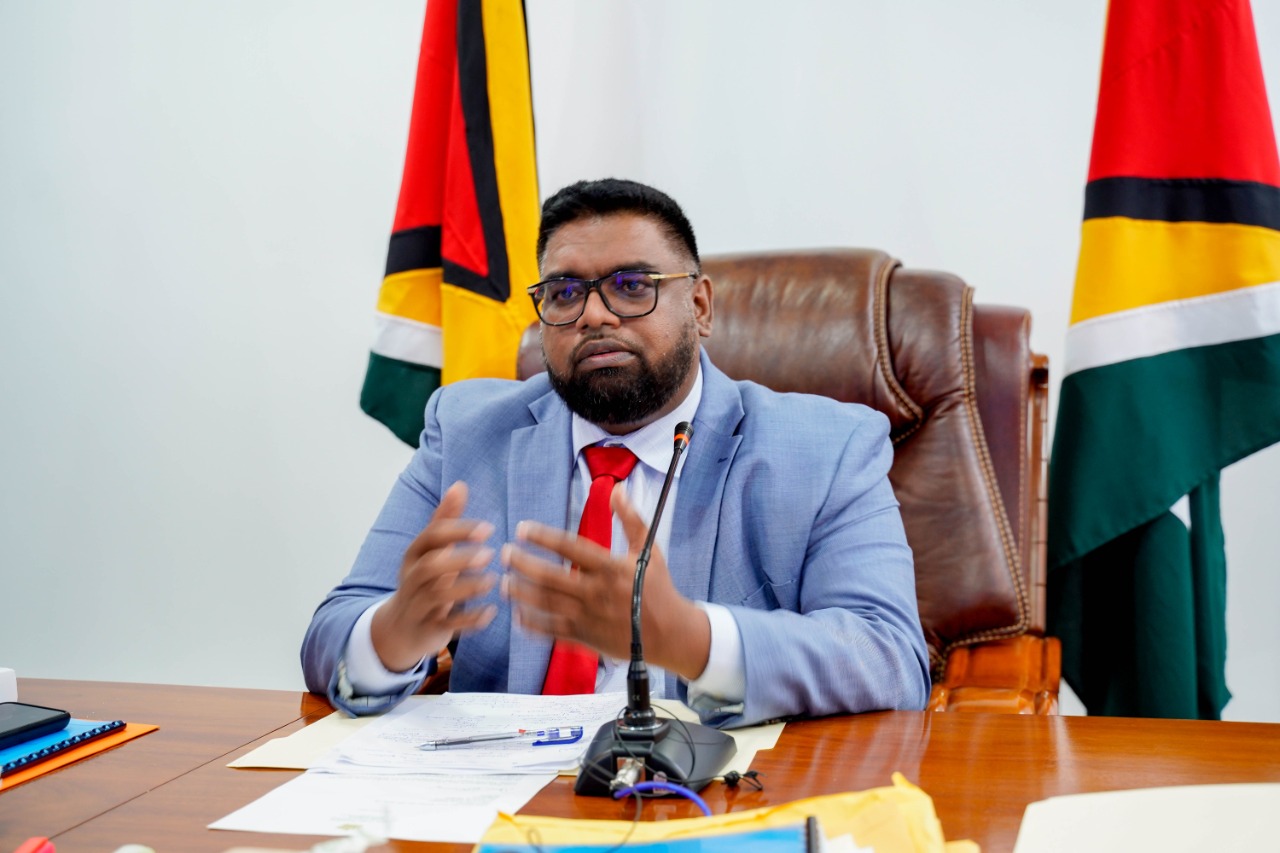 Georgetown, Guyana (July 2, 2021) His Excellency Dr Irfaan Ali this evening said that in under a year, his Government, through its policies and programmes, has been able to restore confidence in the country’s democracy and economy.

The Head of State was at the time delivering a virtual address to the Town Hall Forum, organised by the International Center for Democracy (ICD), in Richmond Hill, Queens New York, where he also highlighted several major projects underway.

The President pointed to the development in the tourism and hospitality sector with the planned construction of two more internationally-branded hotels and the addition of several more before the end of the year.

He added that more than 40 projects have been approved for manufacturing and fabrication, including a cement and asphalt plant, a large scale plantation farm and agro-processing facilities.

“We will see a new milk plant and the completion of a US$20M juice plant, corn and soya production to meet the full needs of our poultry sector.”

President Ali said that these investments will be made by the local Private Sector and those in the Diaspora.

“The confidence in our economy in just ten months in a covid environment has seen increased growth in agriculture, manufacturing, mining, construction, wholesale and retail. In this covid environment, we are also managing a horrible flood that has affected the lives of tens of thousands of our Guyanese brothers and sisters, while we also had to deal with post-elections issues.”

He added that the country’s revenue target at the first half of this year has surpassed its projection by $11.3M due to the growth in these sectors. The country has also witnessed a 100% improvement in the balance of payments deficit; they have also been able to stabilise reserve holdings and stabilise public debts to a sustainable level.

“We have seen great improvements in the labour market and increase in Government transfers that will see social goods being given to the people of our country.”

He noted that, more importantly, the Government has been able to remove, in an annualised manner, more than $50B of the tax burden that was imposed by the former government on the people of Guyana.

“By the removal and reversal of those taxes, we have put back in the pockets of ordinary Guyanese more than $50B annually.”

He said that his administration has also restarted tremendous investments in drainage and irrigation and infrastructure road works that will see the opening up of thousands of acres of agricultural land.

Government, he highlighted, is also supportive of aquaculture and large-scale agriculture investment.

On the education front, the President pointed to the investments made in the sector through the construction of 28 new schools, the scholarship programme and the injection of $4B in online learning and community training and the printing of education materials during the pandemic to keep school children in a learning environment.

“So my dear brothers and sisters, I am pleased to tell you that we have started this journey and we intend to work every single day, harder than the previous day, to realise the dream of all of us; that is a better, more prosperous and fulfilling Guyana.”

The President acknowledged and expressed appreciation for the sterling watchdog role and advocacy of the ICD in defending the people’s democratic rights prior to elections and during the elections impasse from March 2 to August 2 2020.

“I wish, in this regard, to commend the efforts of forces at home and in the Diaspora, who stood their ground and demanded the respect of the will of the electorate. The ICD was in the forefront of the Diaspora’s clamour for respect for the will of the people. I recall its statement of April 7 2020, when it insisted on the people of Guyana having a government that was democratically elected in a free, fair and transparent manner.

Guyana, he stressed, owes a debt of gratitude to non-profit and non-partisan organisations in the Diaspora, such as the ICD. He added that it was the vigilance of democratic loving forces, their outspoken and principled stance, and their robust and sterling advocacy which allowed democracy to survive the brutal attempt of its suppression.

Attorney General and Minister of Legal Affairs, the Honourable Anil Nandlall also spoke at the event.

President Ali’s message on the occasion of CARICOM Day 2021