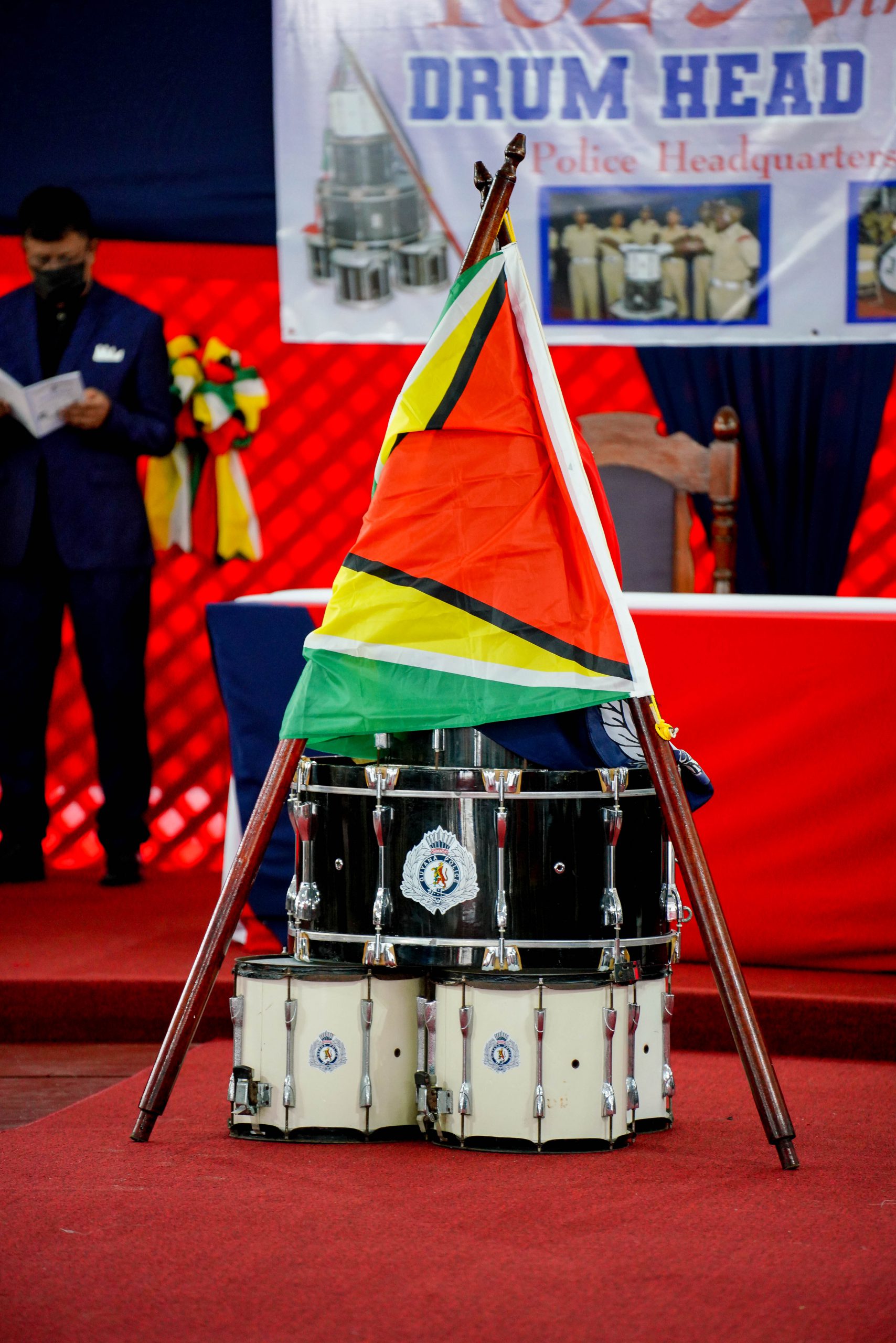 The Drum Head Service is a precursor to a series of activities to commemorate the establishment of the police force on July 1, 1839.

Then called the British Guiana Police Force, the entity started with 245 ranks.  Today the institution has several thousand members at posts all over the country.

President Ali, who was accompanied by the Minister of Home Affairs, the Honourable Robeson Benn and several hierarchies of the Joint Services, has had a special interest in equipping the force with the necessary advanced tools and human resource training since entering office last August.

The President believes that a stronger force would help to bolster the economic development that will revolutionise Guyana.

In outlining his vision for the Guyana Police Force at their annual Officer’s Conference held in March, the Commander-in-Chief had coined the term “Smart policing”- S.M.A.R.T: Systems, Manpower Attitude Reliability and Technology.

He has repeated at numerous forums that technology is an important component in the overall process of repositioning, restructuring, rebranding, reorganising, retooling and repairing the force’s image and service delivery.

During the feature address at the handing-over ceremony of a Computer Training Centre at Cove and John Police Station on the East Coast of Demerara last week, the President had again explained the importance of technology and people-centred policing.

At that event, the President announced that work was already underway to expand the Smart City programme, which will see greater technological use, including surveillance cameras to aid crime-fighting and intelligence gathering.

“That is why easy access to technology and the training component that comes with it is such an important part of un-learning and re-learning to meet the future requirement demand. Part of leading is to create an efficient environment, one in which people have belief in the systems and one in which the system itself is efficient, not where files are misplaced and lost. One in which there is traceability so that there is greater accountability. That is what technology helps us to do–that is the direction we’re heading in.”

This morning’s activities showed the police in their glory. Since the Drum Head Service is a tactical method, arranging the drums requiring skills, poise, neatness and coordination.

Chairman of the proceedings, the Deputy Commissioner ‘Administration’ (ag), Calvin Brutus, explained that the Piling of the Drums can be placed to a long-standing military tradition of dedication used to receiving divine blessings and protection prior to engaging in battle. Such practice, he added, emerged due to situations in shifting battlefields and the inability to access religious sanctuary. A convenient location is therefore identified in the field, and the drums are arranged to perform the sacred function.

Being a paramilitary organisation, the GPF adopted this tradition among many others in existence. The regimental banners were substituted by the National Flag and the Police Flag, respectively.

The church service ended with a doxology and benediction by Bishop Dr Raphael Massiah CCH, the officiating celebrant, followed by the un-piling of the drums signalling the end of the service.