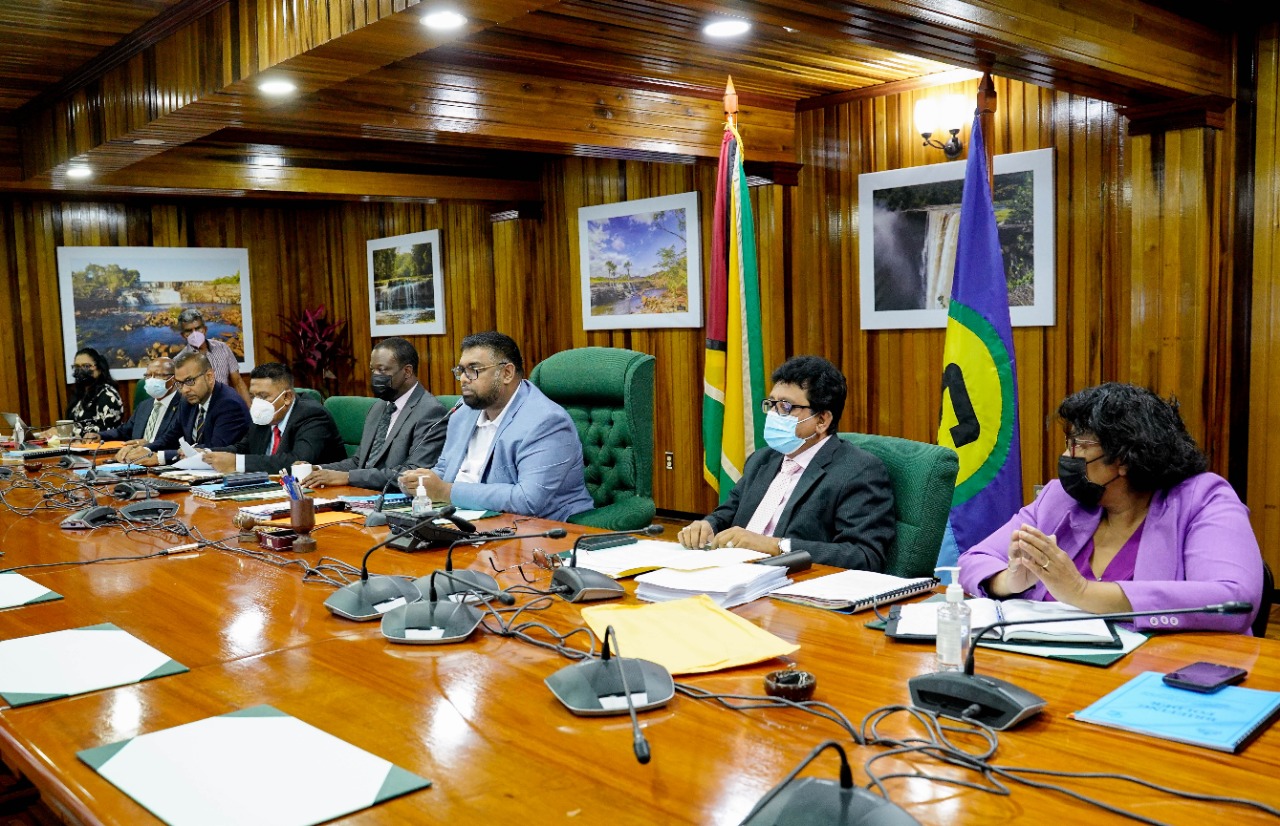 Georgetown, Guyana (June 27, 2021) His Excellency Dr Irfaan Ali and a delegation virtually attended the Eleventh Meeting of The Prime Ministerial Sub-Committee on The CARICOM Single Market and Economy (CSME) on Friday, where he provided an update on The Special Ministerial Taskforce (MTF) on Food Production and Food Security.

The Head of State reported on the April to June progress of the MTF and recommended that it be further considered at the Forty-Second Regular Meeting of the Conference of Heads of Government next month.

The Lead for Agriculture in CARICOM urged the committee to prioritise the work of the Ministerial Taskforce and was frank in his opening remarks to say that he will move forward with those who are serious about getting the work done. To take the CARICOM Agri-Food System Strategy forward, the implementation plans identified priority commodities such as poultry, other meats (beef, pork and mutton), corn, rice, niche vegetables and coconut products. He further stated that CARICOM has the ability to achieve the targets identified to lower these priority commodity imports by 2025 and the potential to increase coconut exports.

The Caribbean Private Sector Organisation and the MTF led by Guyana’s Agriculture Minister, the Honourable Zulfikar Mustapha, have met and are in agreement with the priority commodities, focusing on poultry and niche vegetables for the short term.

President Ali reported that resource mobilisation has begun for the Regional E-Agriculture Strategy, and work is in progress for the development and implementation of both a Business-to-Business (B2B) Platform and a Government-to-Government (G2G) portal. He also noted that the successful hosting of the CARICOM Regional Food Systems Dialogue on May 28, 2021, was in preparation for the UN Food Systems Summit.

The Ministerial Taskforce recognised transport and logistics as integral to the effective implementation of the CARICOM agri-food systems agenda.

“In examining the potential and competitiveness of the sector as you would have expected, transportation is one of the critical issues that is linked to food production and for regional trade,” President Ali stated.  To this end, he has engaged the Lead Head on Transport with a view to developing specific recommendations aimed at incentivising private sector interest and partnership in transport and logistics relative to the agri-food systems agenda. He further outlined some options, including the formation of an all-purpose company, the floating of a regional bond, approaching the private sector window of the Caribbean Development Bank, approaching regional commercial institutions, international financial institutions (such as EXIM Bank), Expression of Interest for financing, managing and operating a facility for regional transportation and logistics. Meanwhile, work will continue to explore incentive regime to attach investment.

Prime Minister Mia Mottley thanked the President for the speed in which he moved on the Food Production and Food Security Taskforce and urged all Member States to reinforce the issue of food security.

Other matters discussed included: implementation of the CARICOM Single Market and Economy (CSME), Update on the Comprehensive Review of the Common External Tariff (CET) and Community Rules of Origin, Supportive Macro-Economic Policy Environment, Implications of the CCJ Advisory Opinion to the opt Out Provisions of The Revised Treaty, Protocol to Amend the Revised Treaty to Allow Enhanced Cooperation Among Member States.