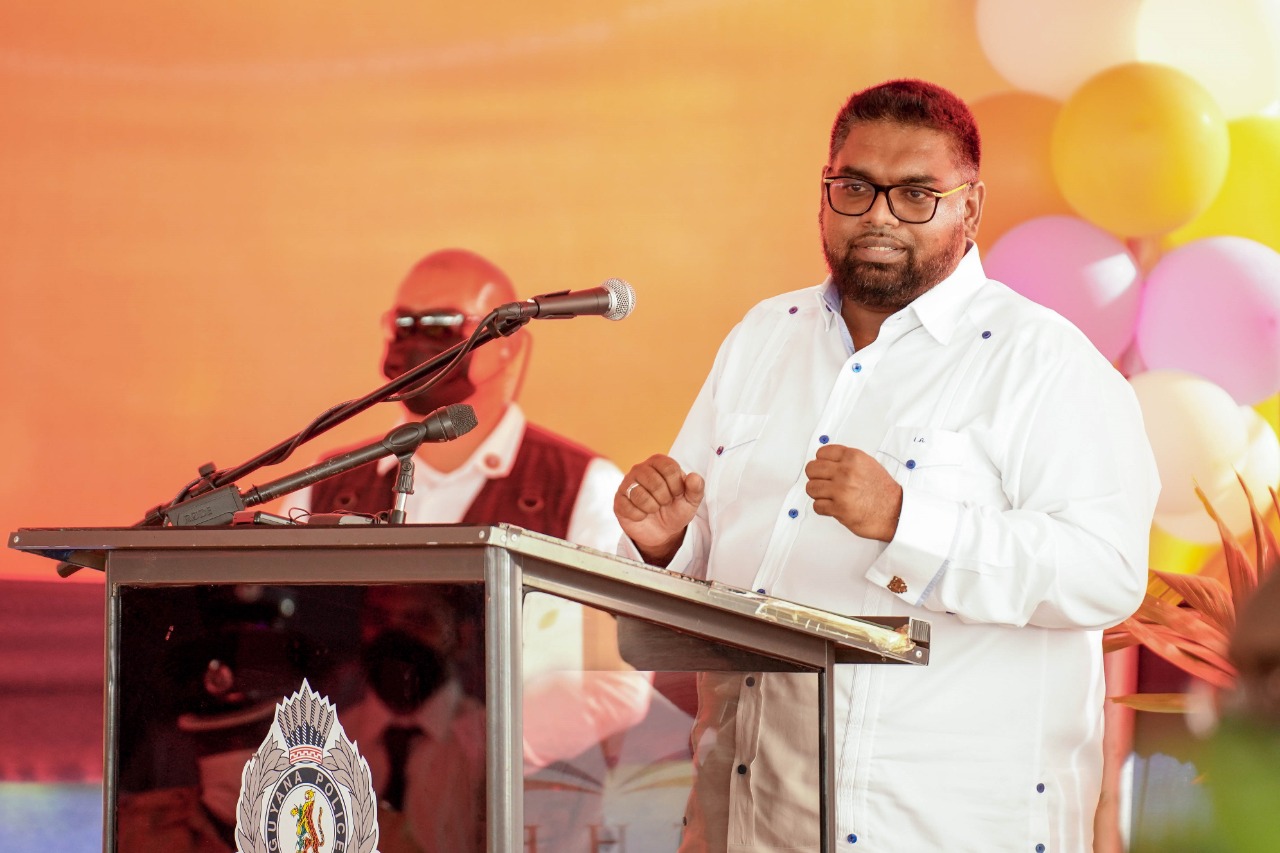 Georgetown, Guyana (June 24, 2021)–His Excellency Dr Irfaan Ali said that the use of technology and people-centred policing are essential to the future of the Guyana Police Force (GPF).

As such, he announced that work is currently underway to expand the Smart City programme, which will see greater technological use, including surveillance cameras, to aid crime-fighting and intelligence gathering.

The Head of State made these assertions this afternoon, as he delivered the feature address at the handing over ceremony of a Computer Training Centre at Cove and John Police Station on the East Coast of Demerara.

He said that as crime changes, the approach to fighting crime will also have to change through the use of greater intelligence gathering and better surveillance, executed by well-trained professionals.

“We understand that the nature of crime is changing globally and as such will change locally as a more prosperous country becomes a target for more sophisticated criminals.”

President Ali noted that cross-border collaboration is necessary and that relationships with other countries have led to drug busts at the regional level over the past months.  He pointed out that these took strategic planning—and will be part of the country’s strategic positioning moving forward.

LEAD BY CREATING A LEARNING ENVIRONMENT

The President said that the GPF has to lead by creating a learning environment—even if it means unlearning or re-learning methods.

“That is why easy access to technology and the training component that comes with it is such an important part of un-learning and re-learning to meet the future requirement demand. Part of leading is to create an efficient environment, one in which people have belief in the systems and one in which the system itself is efficient, not where files are misplaced and lost. One in which there is traceability, so that… there is greater accountability. That is what technology helps us to do–that is the direction we’re heading in.”

The Commander-in-Chief of the Armed Forces said that a change in attitude and mindset is also an important part of leading. As such, he acknowledged that his Government has a responsibility to improve the environment in which the men and women in uniform operate.

“A positive environment will also create a positive mindset. We are embarking on a massive programme to create that environment. You will see in the communication strategy, we have brought in professionals in that area so that we have a merge of different capabilities and strengths, so that we can have a better product that comes out.”

REGIONALISATION AND MULTIDIMENSIONAL APPROACH TO CRIME-FIGHTING

The President said that crime-fighting will not be limited to the capital or major towns but will be spread across the country.

“You know we have the National Centre established… We are going one step farther, in every region… we’re now looking at the possibility of establishing regional centres that will incorporate civilians and the police force.”

He added that his Government is now placing resources into regionalisation, which has been part of the security strategy for the last decade.

The President noted that the merger of skills would result in a multidimensional approach to crime-fighting.

He added that the best way to fight crime is to have partnerships and collaborations. In this regard, he said that he would like to see the private sector play a more supporting role.

High on the agenda is also to have the police become more people-centred.

“So you have a computer lab, as you’re able to work alongside students, members of the community; you start to create a positive network. If we can train the police officers as trainers in computer science and technology and then have those officers go and volunteer an hour every week in a school to impart that training on students…you start to create a positive link with members of the community.”

He extended gratitude to husband and wife Jay and Sylvia Sobhraj from the Zara group for their continued support over the years.

“I want to assure you that what you’re contributing to is the creation of a new outfit to better serve the people, and we thank you sincerely for that,  as we move forward in the Guyana Police Force with the three E’s –  equip, evolve and emerge.”

Minister of Home Affairs, the Honourable Robeson Benn, also expressed gratitude to the family and explained that he was “enthralled” by the gesture and their continuous support for the Guyana Police Force.

He encouraged the ranks to take proper care of the assets and the software to better serve the people. This, he said, will lead to a more holistic response to crime-fighting and security.

The training centre was built and equipped through a collaboration between the Guyana Police Force and the Jay and Sylvia Foundation, Zara Group of Companies.

Acting Police Commissioner, Mr Nigel Hoppie, other high-ranking members of the Guyana Police Force (GPF) and other representatives from the Jay and Sylvia Sobhraj Foundation were also in attendance.

Prior to this initiative, the foundation’s collaboration with the GPF has resulted in 13,626 persons being trained at four computer training centres around the country— 2,834 members of the GPF and 10,792 civilians.