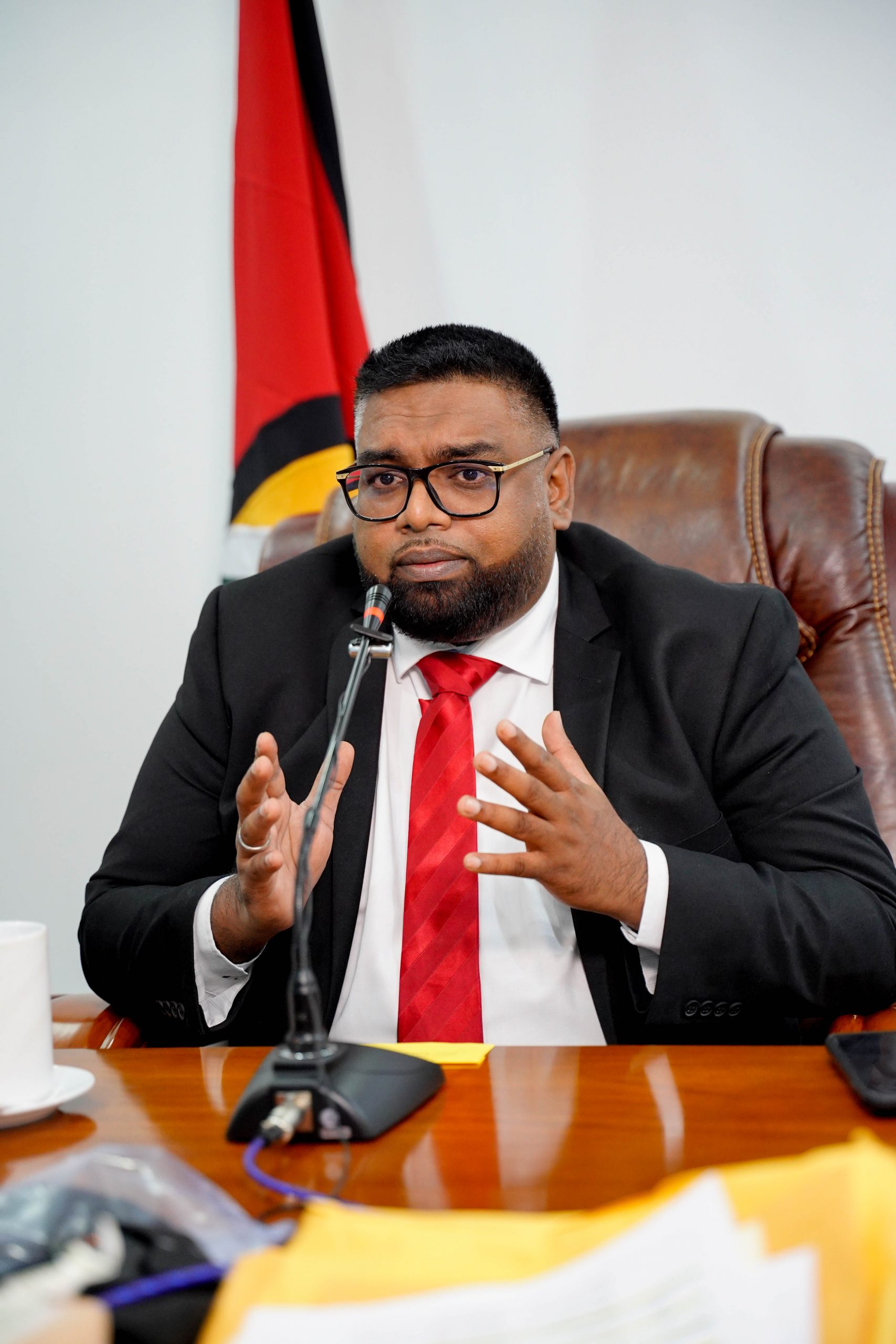 Georgetown, Guyana (June 16, 2021) His Excellency Dr Irfaan Ali today said that Guyana can be considered a model in the region for successfully addressing urbanisation due to our policy framework and deliberate planning.

In a keynote address, the Head of State asserted that structured systems are imperative in long-term solutions.

He told participants of the Caribbean Urban Forum’s (CUF) 10th International Conference that a sustainable approach to urbanisation is key, more so since urbanisation remains a significant challenge for the Caribbean.

“How we respond to urbanisation will undoubtedly determine the quality of life of our citizens and whether we achieve the Sustainable Development Goals (SDGs)…There must be a common pathway through which urbanisation reflects the attainment of the SDGs. While it is not unusual for us to look outside of the Caribbean for solutions, many of those solutions already exist right here at home.”

President Ali, who had delivered a similar address at the first Caribbean Urban Forum session, held in Georgetown in April of 2011, as the then Minister of Housing and Water, noted that Guyana’s example is a positive yardstick to analyse the importance of planning.

“In Guyana, for example, we have been successful in addressing urbanisation. The available statistics show that between 1992 and 2011, the degree of urbanisation reduced continuously. Our success during this period was by no means accidental but was due to deliberate efforts by the Government of Guyana to embark on an ambitious housing programme, where over 100,000 house lots were distributed, and several housing schemes were developed as new growth poles.”

President Ali, who holds a PhD in Urban Planning, further explained that the robust housing programme was rooted in an organic National Development Strategy (NDS), predicated on objectives that were bolstered by policies articulated in the Poverty Reduction Strategy Papers (PRSP) I & II.

“Under the Poverty Reduction Strategy, the Government pursued numerous interventions which sought to: divest land to eligible Guyanese; provide infrastructure for new housing schemes and improve existing infrastructure in squatter settlements; regularise squatter settlements; facilitate access to finance by low-income earners through amendments to the New Building Society Act and the Income Tax Act; facilitate community participation in sustainable settlements development and prepare development plans for new towns and upgrade existing towns, consistent with the framework for Urban Development, elaborated in the NDS (2001-2010).”

Those national policies, the President noted,  were backed by significant fiscal support from the Government between 1992 and 2015 and were supplemented by an operational manual for housing that emphasised all the critical dimensions of sustainable development, including; social development, economic development, environmental preservation and good governance etc.

Due to these efforts, Guyana not only witnessed a reduction in rural-urban migration and the lowering of its urban footprints between 1992 and 2015 but saw accelerated development in rural areas and the attainment of several MDGs.

Dr Ifraan Ali explained that apart from sparking his interest in urban planning, the success of Guyana’s efforts to promote balanced development spurred his decision to pursue his PhD at the University of the West Indies.

“Over the next five years, my Government will be distributing 50,000 house lots to Guyanese, based on a model that has successfully produced human settlements which are safe, resilient, and sustainable.”

He lauded the organisers of the CUF 2021 for presenting a comprehensive agenda, which included consideration of sustainable urbanisation while noting that this year’s Conference is taking place at a critical time for Guyana.

“Transforming Guyana would, in effect, mean that change in our physical landscape would have to be effectively and efficiently executed and guided by the application of proper planning principles, particularly in light of the declared commitment of my Government to sustainable development.”

President Ali pointed out that sustainable urbanisation is imperative for the Caribbean. The process remains a significant challenge to the region due to changes stemming from climate change.

“This is a development consideration I deem relevant to all Caribbean countries grappling with the combined need to facilitate new forms of urban development and, at the same time, combating major challenges such as climate change.”

The President also pointed to the importance of transformational leadership, which he said is an integral component of his Government’s vision for urban transformation in Guyana.

In pursuit of this vision, he noted his Government’s intention to expand the range of E-Services, including the Single Window Approval System.

“This effort will be supplemented with investment in transport infrastructure to improve connectivity and support the agro-industrial, light manufacturing, commercial and tourism sectors. Additionally, the Government will partner with the Business Process Outsourcing (BPO) sector to help it decentralise its operations away from Georgetown to places like Tuschen, Linden, Essequibo and Berbice. This move will expand available economic opportunities, create more jobs and provide essential incomes for thousands of families in areas outside of the capital.”

In pointing to yet another initiative, he said that the Wales Development Authority will also be able to distinguish itself as “the industrial centre of the Caribbean”.  According to the Head of State, the Wales Development Authority will bolster industrial, manufacturing, warehousing activities and generate much-needed employment across the different enterprises that will fall under its purview and indirect employment as well.

He emphasised that as countries grapple with planning and managing their urban environments, it is imperative to recognise that those efforts may not be properly sustained over the long term or may be doomed to failure without requisite technical and professional capacity.

“Therefore, it is crucial that the necessary capacity is developed to effectively and efficiently manage urban change at all levels of urban planning and governance. I urge that more attention be given to professional training and capacity building in urban planning and environmental management.”

The President praised the work of UG’s Geography Department in the execution of its Master’s programme in Urban and Regional Planning. He also recognised the efforts of other regional institutions for their long-standing contribution to land use and built-up environment development and design education in the Caribbean.

“My Government is fully supportive of training and educating a new cadre of professionals that will be masterfully equipped with the essential skills and competencies to deal with our complex urban challenges. The recently launched Guyana Online Academy of Learning, a free online 20,000 scholarships initiative, is tangible proof of my Government’s commitment to attaining this objective.”

Regarding urban resilience, the President emphasised his Government’s commitment to creating suitable urban development policies that will influence key considerations when undertaking planning and expansion and fostering better urban resilience in an era of rapid change and transformation of urban areas.

“I highly applaud the work of all those behind the Caribbean Urban Forum for moulding it into a major regional urban planning and networking event that has grown in prominence and eminence over the last ten years.”

President Ali added that key government agencies involved in urban planning matters stand to benefit tremendously from a conference of this nature.

The 10th Caribbean Urban Forum (CUF2021) will run until June 18. The event is being hosted by the University of Guyana.  The co-hosts include the Caribbean Network for Urban and Land Management (CNULM) based at the University of the West Indies, Trinidad and Tobago; the Central Housing and Planning Authority; the Guyana Planning Association; and other national, regional and international organisations.

Through the central theme of Urbanisation: Processes, Policy and Emerging Challenges, the organisers of the event aim to confront the issue of urbanisation in the Caribbean context and to examine the range of policy responses to this phenomenon critically.

Close to 200 participants were invited from the Caribbean, the Guyanese and Caribbean Diaspora communities, faculty members, and students of the University of Guyana and other universities in the Caribbean.  The CUF also includes participants from other institutions/agencies such as UN-Habitat, the Caribbean Development Bank, and UN-ECLAC.