Government will be with farmers throughout the rebuilding phase—President Ali 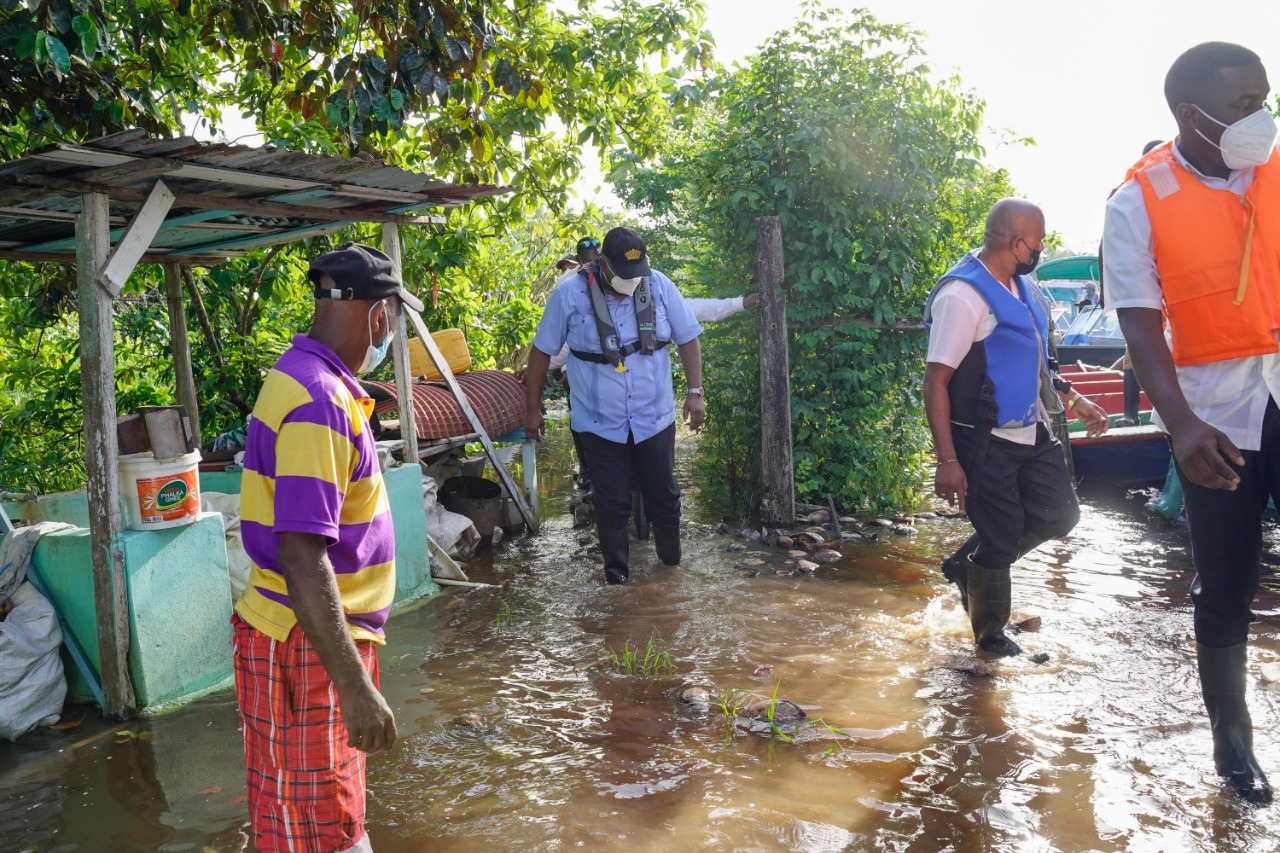 New Amsterdam, Guyana (June 8, 2021) His Excellency Dr Irfaan Ali today assured farmers of Region Five that his Government will support them throughout their rebuilding phase as they continue to deal with the effects of floodwaters.

The Head of State outlined several solutions, which will see relief and assistance in the short-term, medium-term, and long-term.

He promised to provide such for all those who are affected by the destructive floods in Guyana.

“I am here today as President to assure you directly that though the situation is daunting now and challenging, you can rest assured that Government is here to support you, not only in the immediate term but also in the medium and long terms.”

There was one common call from farmers at the different locations, and that was the need for support to help them get back on their feet.

“My friend raised the issue with support for the farmers, the bank, and so, yes, I hear you, and definitely those are the things we will be talking about as we move forward,” the President noted during one of the stops. “We will be engaging the banks and looking at what we can do; we will be looking at how we can help to return you to the lands and to ensure that we can get back to productive capacity. That is why I am here to assure you that we are going to work with you.”

The President also stated that the Government will be going to parliament on Thursday to secure a supplementary provision that will help provide medium and long term assistance to residents and farmers.

Today’s visit started off at Big Baiboo in Mahaica Creek and then proceeded to five riverine communities along the Mahaicony Creek, where opinions and suggestions were voiced by numerous residents.

According to the President, it will be difficult to gauge the magnitude of destruction on farmlands and households, until the water recedes.

The Head of State reiterated that the Government’s priority in the initial stage of the disaster is to provide the essentials, including food, drinking water, medical supplies and shelter.

President Ali also told the communities that they need to be selfless in community spirit since they are stronger as a unit.

“Sometimes what is best for the community might not be best for you, but that is why we live in a community, we don’t live on an island by ourself, and in times of disaster, we have to make a decision that is in the best interest of our community. We have heard you, I am asking you to sit down as a community, and I want you to come up with the priority that you want. Because when the supplementary is passed, we will take your priority and implement it. I am asking all of you to come together.”

Minister of Agriculture, the Honourable Zulfikar Mustapha, who was one of two Ministers with the President, also gave an update on the Government’s immediate infrastructural interventions.

“I was here last Monday, and a number of requests were made. I know for a fact that all the requests have been taken care of; we have placed the pump at New Providence. We have brought in the machine; four machines were working in this area from last Monday.”

He added that since the water is not receding, a pontoon with an excavator has been moved to the mouth of the Mahaicony River for it to be dredged. He added that a pump will also be moved from Pine Ground to Cottage to assist the drainage.

Director-General of the CDC, Lieutenant Colonel Kester Craig, updated the residents on the Commission’s efforts across the country and the region in particular.

Residents expressed their gratitude for the President’s visit and said that while they are still severely affected by the flood, the visit has brought them some “peace of mind” and reassurance.

Along with Minister Mustapha, and Craig, Minister of Local Government and Regional Development, the Honourable Nigel Dharamlall; Head of the NDIA, Mr Lionel Wordsworth; Regional Chairman, Mr Vickchand Ramphal and other representatives, also travelled with the President.