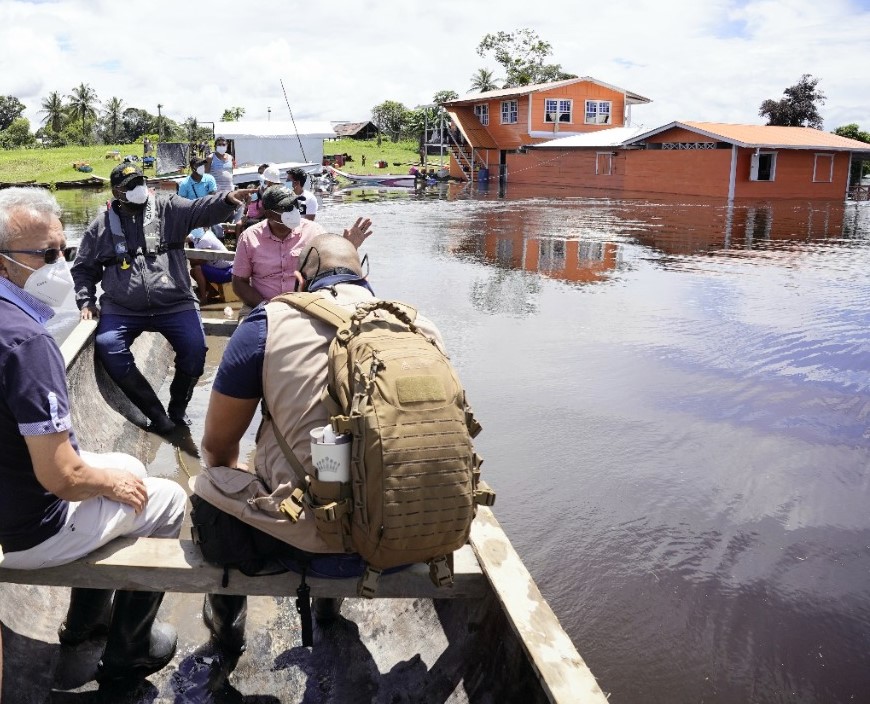 Georgetown, Guyana (June 5, 2021) His Excellency Dr Irfaan Ali today assured residents of Region Seven that his Government will put both short-term and long-term systems in place to help those affected by flooding.

In a visit to the region, the Head of State along with Minister of Agriculture, the Honourable Zulfikar Mustapha and Director-General of the Civil Defence Commission (CDC), Lieutenant Colonel Kester Craig met with residents of several communities and flew over the affected areas to strategise on a way forward.

In the interim, President Ali said that the focus would be on food, shelter, access to medical facilities, and medical care.   He told residents that the CDC will soon start distributing necessary emergency supplies.

After the initial stage of relief efforts, preparations will be put in place to facilitate long-term relief.  These include assessments of affected households and damage done to farms.

At Jawalla, in Upper Mazaruni, the President said that initial estimates indicate that some 60 households have been completely affected and that approximately 169 farms were inundated.

The flooding in the Akawaio community is one of the worst in decades.

President Ali empathised with the affected residents and assured them that his Government will work none stop to help them get back to some level of normalcy.

“I am here personally to let you know that we understand your pain—we feel your pain.  I want to commit to you, that you will get help and the Government will help the community and the farmers.”

In the interim, he said that the focus would be on getting people to safe and secured locations and to ensure that they have food and other emergency supplies.

As he did in Jawalla, the President also listened to the needs of residents from fellow Akawaio community, Kamarang.

He told persons there that the flooding is a national disaster, but that the Government is committed to helping all Guyanese.

Colonel Craig said that over 250 food hampers and cleaning supplies were carried to Kamarang and will be distributed to affected residents.

He said that the CDC will continue to work with the community to provide necessities.

The team of officials also visited other areas in the region, including Olive Creek.

Heavy rainfall has resulted in flooding in numerous communities nationwide, which has affected many homes and farms.

The President is currently trying to get additional resources to help offset the losses of farmers nationwide.

His ministers and their departments have been working around the clock to help bring relief to those affected.

The private sector has also been a pillar of support.