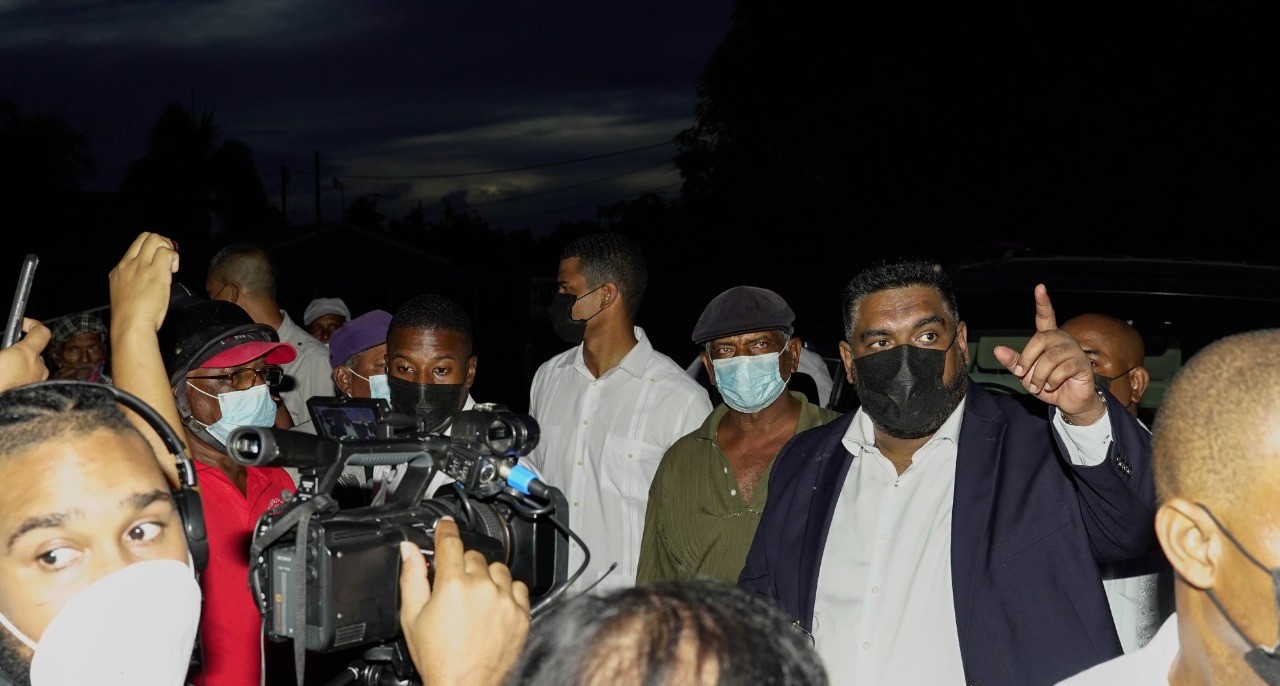 Georgetown, Guyana (June 5, 2021) His Excellency Dr Irfaan Ali confirmed that the Region Three Disaster Response Regional Task Force has been activated as Government looks to mitigate flooding in the region.

The Head of State visited several different communities on Friday afternoon. He started at Naamryck and Parika before travelling to communities on the West Bank of Demerara, including Canal Number One, Canal Number Two (as well as Belle West) and Patentia to assess the flooding situation there.

“The Disaster Response Regional Task Force has been activated, there is 24 hours monitoring as to what is happening in the region. So far, I can tell you that there is documentation of affected households.  Intervention has been made with food hampers and cleaning agents, and so on. We are now working on health packages for preventative care for known effects of flooding on health.”

During his first stop at Naamryck, he gave an update on the rising water of the Boeraserie Conservancy.

“What is happening in the Naamryck, Parika area is that the water has to be released, unfortunately; otherwise, we will have a greater disaster. If the water is not released, the dam goes, and if the dam goes, entire housing communities and so will be flooded out. So that is the situation with the Boeraserie as with many other conservancies.”

President Ali further explained that the high levels of rainfall and record volumes of water have affected conservancies in the region.  He said that at Boeraserie, 62.7 Guyana Datum (GD) was the highest ever recorded level. At present, the water level is at 63.3 GD, while the highest point of the dam is 64 GD. He disclosed too, that there are some areas of the dam that are not as high.

He said that drainage of the water is a process.

“Even if the rain stops now, the job is far from over because volumes of water has to come down.”

In pointing to Government’s ongoing monitoring assessment exercise, the President said that Minister Manickchand, Minister Indar, the Regional Chairman, the Regional Authority and the NDC representatives have been on the ground in the region, in every community, over the last week and a half.

He noted that while aspects of the situation are within the control of the Government, a lot is also outside of Government’s control.

“We can’t control the rainfall or the volume of water that has to come, that is a natural occurrence. This calls for partnership.”

The President said too that the NDC Chairman met with farmers yesterday morning along with NDIA representatives and explained what is taking place.

“If the rain continues, there are a lot of hard decisions that we will have to make because we will have to find additional outlets for the water because we cannot afford for the dam or any part of this dam to be eroded or to break away. It will be a major disaster. So I want residents to understand what we are facing… we have mobilised machines for emergency work all across the different conservancies and banks, trying to build the level of the bank.”

The President said that such levels and volumes of water were, in the past, a 1 in 1000 occurrence, but given the effects of climate change, such extreme conditions may become more frequent in the future. The current situation he added is indeed testing “all of our capabilities”.

“I must say the NDIA, led by Minister Zulfikar [Mustapha], the Sea Defence people; they are all out 24 hours. This requires understanding and patience from all stakeholders too. We understand the complications for farmers and so on. Right now, we are at a stage where the Government is focusing on securing livelihoods, securing lives and assets and ensuring that we have a robust response from the Health system.”

He assured that a mechanism will be activated to provide preventative measures and preemptive communication to keep residents informed.

He said that he communicated with the Ministry of Local Government and informed them that all the NDC chairs, “If it comes to the point that we have to release [water] to other areas, then we have to communicate early to farmers and households. But the situation is not one that we have control of because it is a natural occurrence”.

The President stressed that the immediate focus is on stabilising the situation after which, a full assessment of the impact and damages will be conducted.

At Canal Number One, he announced that the Government is working on getting finances for the affected farmers.

“To the farmers who are affected, we are already working. A few minutes ago, I was on the phone with the Vice President [Dr Bharrat Jagdeo] and the Minister of Finance [Dr Ashni Singh], and we are working now on finding additional resources to go to the parliament for a supplementary so that we can bring relief to you.”

President Ali extended gratitude to the Regional leaders who reached out to offer their support in one way or another.

“I want to also take the opportunity to thank Prime Minister [Mia] Mottley, who reached out, Prime Minister [Ralph] Gonsalves in helping us and in offering whatever assistance they can.”

He added that as the water volume becomes greater, more and more persons, particularly in the Hinterland communities, will have to move to shelters.

“I want to say that there is a lot of work that has to be done. I am very happy that the Chairman of the Private Sector Commission is here too because the PSC is playing a key role in helping to mobilise help and resources to move us forward.”