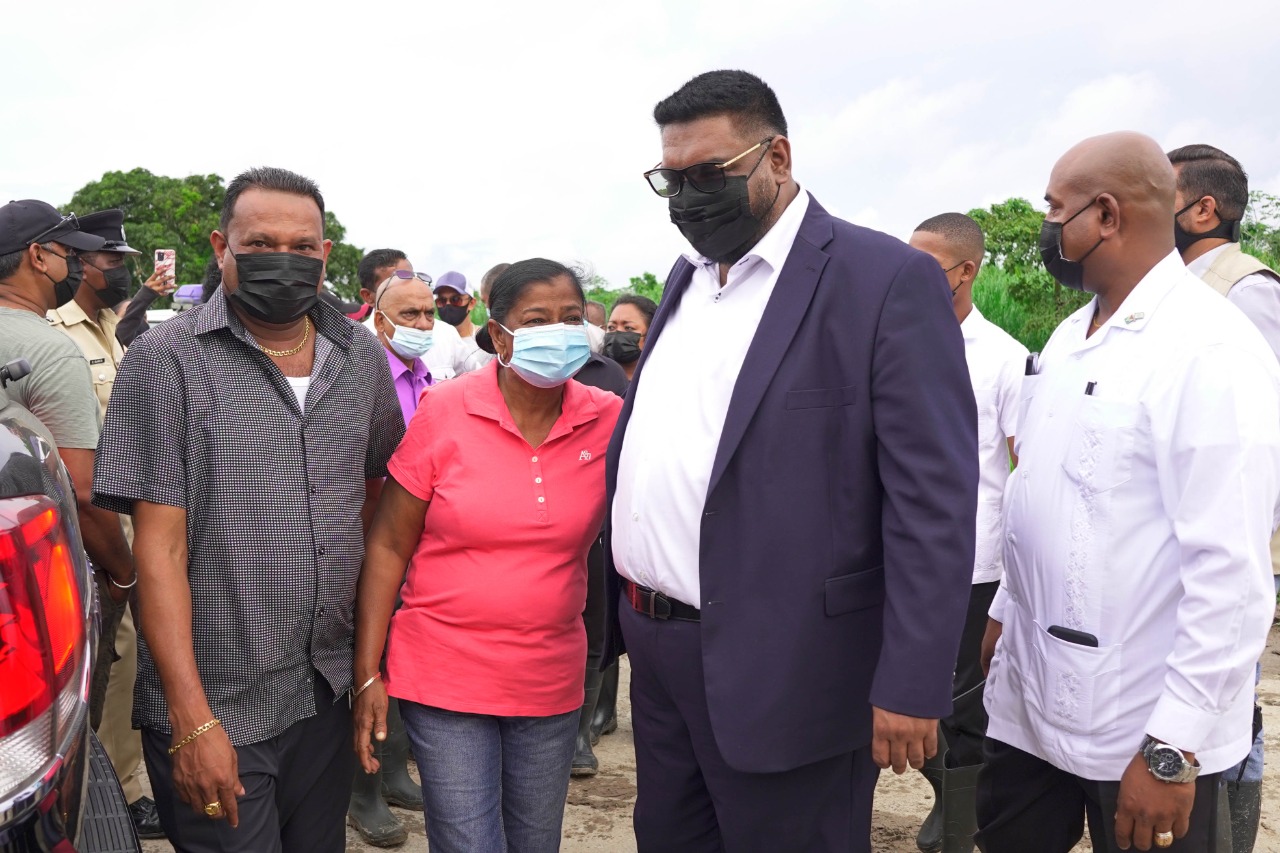 Georgetown, Guyana (June 4, 2021) His Excellency Dr Irfaan Ali today told flood-affected farmers in several communities in Region Three that his Government is working assiduously to find additional funds to bring relief to them and others who are experiencing difficulties across the country.

“To the farmers who are affected, we are already working. A few minutes ago, I was on the phone with the Vice President [Dr Bharrat Jagdeo] and the Minister of Finance [Dr Ashni Singh], and we are working now on finding additional resources to go to the parliament for a supplementary so that we can bring relief to you.”

Canal Number One, where the President disclosed the information, was one of several stops for the Head of State and a team of Government officials, including the Minister of Education, the Honourable Priya Manickchand and the Minister within the Ministry of Public Works, the Honourable Deodat Indar.

The group first journeyed to Naamryck and Parika, where the President assessed the Bonaserie Conservancy that is almost filled to its brim due to the heavy and consistent rainfall.

He then made his way to Canal Number One before travelling to Canal Number Two, where he again spoke with flood-affected residents and reassured them of his Government’s commitment to helping to alleviate their current woes.

The President explained to the residents that the Government fully understands the impact that the high floodwaters have had on their livelihoods since the current flooding is not an isolated situation but one the entire country is facing together.

He also indicated that the relief efforts, including food and cleaning supplies, would be continuous.

“Whilst we may not be able to give 100% help in what may be required, you can be assured that the Government will be providing assistance in getting back your lives together and livelihood together.”

Giving an update about the intermediate interventions, Minister Indar said that the Government is fully aware of the damages to farms and pointed out that excavators will be mobilised and that pumps will be used to help ease the flow.

Four excavators, according to the Minister, will be used to build a dam to block the conservancy water from leading back into Naamryck.

“Food and making sure that the place is good to live are the main concerns right now. So, we will come throughout the region and given people as much with respect to hampers and so. But, the intervention on the draining of the water, cleaning of the trenches, putting the excavators in place so that they can have a swift drawdown of the water… We are putting the tractors and the pumps at the various sluices so that when the koker locks you still have the water being throw off,” the Minister added.

President Ali gave the residents from the communities a chance to air their opinions.  Most of them expressed their gratitude for the Head of State’s visit and said that it has brought them “some relief”.

The residents and farmers related that they are aware that the flooding has been caused by excessive rainfall and water coming down from the highlands.

“First of all, let me say to you we are here because we understand what is happening. This is a natural occurrence,” the President pointed out. “It is affecting lives all across the country. What is our immediate task is to bring relief, to help you now. From what I am seeing, you require immediate help for quite a few things. One, you would need to have some support in food supplies. Two, you will need some support in medical supplies, and three, we are going to do some assessment for some emergency works on drains and so on.”

The President added that climate change and urbanisation are causing major changes.

“With climate change, one of the things that we have to look at, especially with our farming community, is future patterns and then look at how we reintegrate the drainage system because the fact of the matter is, and this is one of the challenges of development— housing is going to grow here in Region Three.”

President Ali said that the area where the Parfaite Harmonie housing scheme is now located used to act as a natural reservoir to some extent.

“As you continue and expand housing, the challenge becomes greater. That is why I said earlier we have to look at innovative technology, sound engineering solutions like the one we have at Hope Canal. You need, sometimes, unimpeded discharge for situations like these. We cannot deny climate change. Climate change would bring more and more unplanned disasters, more and more natural disasters like these and in higher scales.”

President Ali added that a team of ministers would return tomorrow to continue the assessment and bring immediate relief to the residents.

Regional Engineer from the National Drainage Irrigation Authority (NDIA), Mr Lall Piterahdaue and the Head of the Private Sector Commission, Mr Paul Cheong joined the President and the Ministers on the trip.