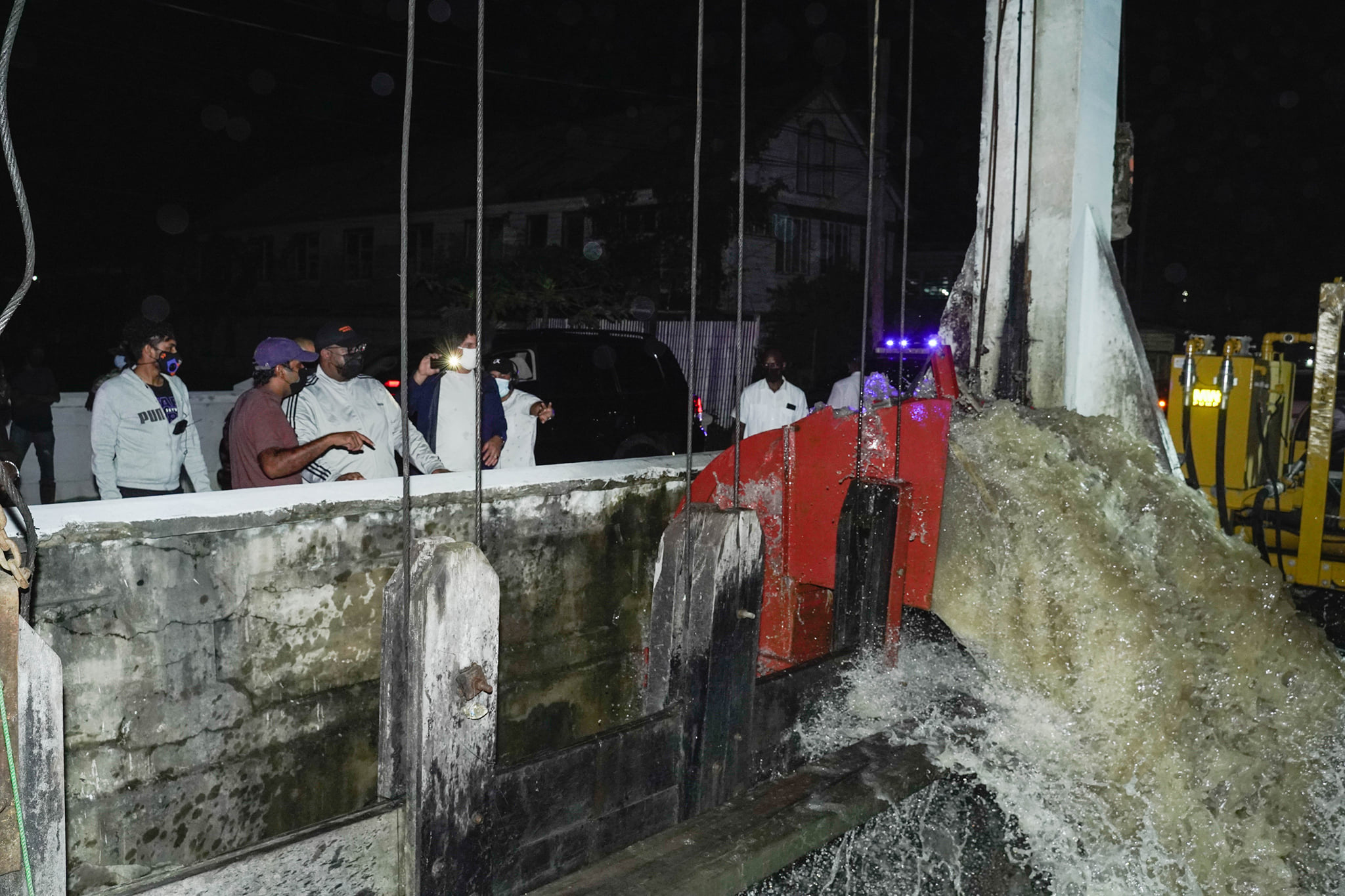 Georgetown, Guyana (May 31, 2021) His Excellency Dr Irfaan Ali said that there are no excuses for the irresponsibility shown by some pump attendants who neglected their duties on Sunday night.

The Head of State made this pronouncement during a spontaneous, late-night, inspection of kokers and pump stations around the city and down the East Coast of Demerara.

“There must be consequences for your actions and unless we are prepared to hold people responsible, we are not going to see the full potential or the full results of the investments we are making.”

During his visits, the President had discovered that the pumps at several stations, including Riverview and Kitty, were off. At Riverview, the Koker doors were closed and the worker was asleep. The President expressed total disbelief at the level of carelessness shown.

“This is what we are talking about, I came out here myself to verify tonight. The main pump to drain the city is turned off. Up to today (Sunday), we said the pump must be on 24 hours….While we have to deal with the heavy rainfall, we have to deal decisively with the irresponsibility and the negligence. I have to come out here at this hour to find that the pump is turned off.”

The President, who had journeyed out to ensure that all that can be done was being done to ease the burden of flooded streets and homes after continuous torrential downpours, said that he was disappointed in the lackadaisical approach, especially when the lives and livelihood of citizens are at stake.

“Tonight we are not here to go after anyone, or to be critical of anyone or to get anyone. Tonight we are here because we all have responsibilities as leaders and when you know that you’re putting investments in, the people expect to see the return. But when you have conditions where personnel and other functionaries within the system of governance, whether it’s the Mayor and City Council or other bodies, are not pulling their weight, or not providing the leadership, mismanaging the situation, then we will have difficulties.”

The President reminded that across the country, Guyanese are living under tremendous stress as many have seen their homes flooded, crops and livestock destroyed and their livelihood affected.

He pointed out that the floodwaters and the rainfall do not discriminate and have nothing to do with politics, but affect all Guyanese.

“So, as a caring Government, we are out here. Not only am I out here, but different Cabinet members are also in different areas… the situation is very, very difficult at the moment… At the end of the day, people are suffering and that is what worries me; that is what bothers me.”

There were several pump attendants who were attentive to their jobs and the President was quick to commend them. He was pleased with the work done and the commitment shown at the pump stations in Meadow Bank, Central Georgetown, Kingston (while assessing the Lamaha Street pumps), Liliendaal and Hope Canal.

MODEL FOR THE FUTURE

President Ali also said that the Hope Canal, a signature project of the last PPP/C Government, continues to prevent massive flooding in several East Coast communities and may be replicated in other parts of the country.

“This facility has really helped out tremendously and it is facilities like this- the Hope Canal- that we may have to replicate in Berbice and in other areas to drain directly from the backlands straight out to the ocean.”

The Canal has massive drainage capabilities and has been instrumental in keeping floodwaters at bay during the current rainy season.

When he visited the station, all eight sluice doors were opened and were taking off large volumes of water from nearby communities.