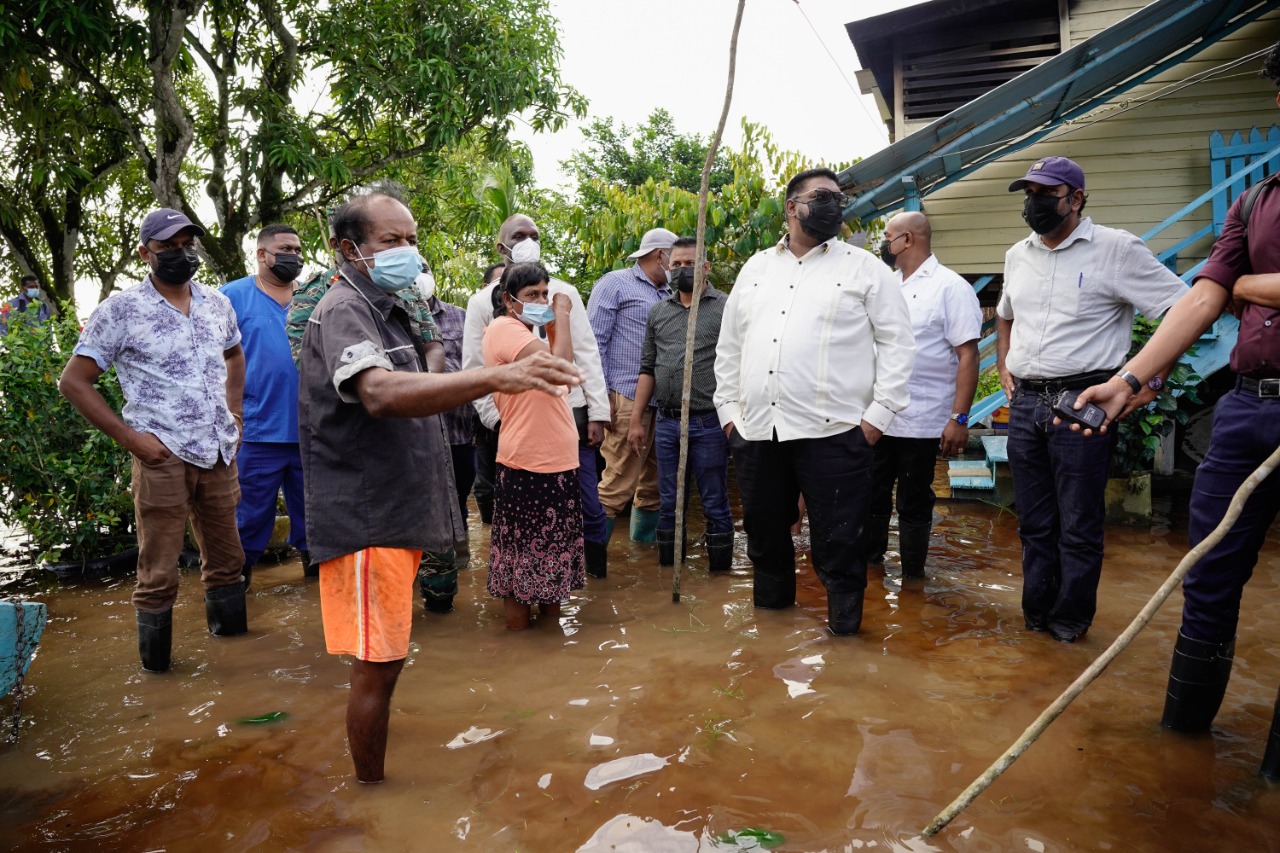 Reassures distressed residents that Government’s support would be continuous

Mahaicony, Guyana (May 28, 2021) His Excellency Dr Irfaan Ali this afternoon reassured residents of Mahaicony Creek, Region Five, that his Government would work around the clock to ensure that Guyanese affected by flooding caused by persistent heavy rainfall are kept safe and provided with essential supplies.

The Head of State travelled by boat to First Savannah, Water Dog Creek and Gordon Table where he assessed, first-hand, the impact of the floodwaters on residents’ homes, livestock and crops.

Prior to visiting the area, President Ali held a high-level meeting with members of his Cabinet, the Guyana Defence Force and the Civil Defence Commission (CDC) to assess the way forward.

Mahaicony Creek is one of a number of areas across the country that has been affected by the inclement weather.

President Ali stopped at several houses on the waterfront and interacted with residents. They related to him that they have been battling with persistent floodwaters over the last two days that have invaded their homes as well as their agricultural lands.

The Head of State reassured the residents that his Government’s support would be continuous.

“It’s all the regions we are having this difficult time with and we have to get resources all over. I know it is a difficult situation, but the problem is the rainfall which we don’t have control of and it is not only in one area but in all ten of the regions. So what we are trying to do now is to ensure that people are safe and that essential necessities are met.”

The President emphasised that constant support, especially as it relates to infrastructural work, would be provided, which includes increasing the heights of dams. He stressed that the Government’s main focus is to ensure that people are secured.

Mr Rafeeoodeen also echoed the Head of State’s sentiments and pointed out that the farmers are currently being supported by six excavators—three on the right bank and three on the left back of the river—to secure transport for crops, and to heighten the floor embankment to prevent water from overflowing into the farmlands.

Regional Chairman Ramphal also pointed out that they have since distributed 200 food hampers as well as cleaning supplies in the region.

He said that he was extremely happy that the President had visited the area and is encouraged by the efforts in place.

“I must say that I am very happy with the response of the Government, the Civil Defence Commission and the collaboration and cooperation that exists within the RDC and the various ministries in addressing the flooding situation here.”

Residents also pointed out that since agricultural lands have been inundated, their livestock have no dry ground to stay on.

President Ali instructed the Regional Chairman to ensure that areas are located for residents to use “to keep their livestock dry and safe”. He also pointed out that the areas should have a localised rapid response team that would be able to respond to the residents’ daily needs, instead of large teams having to travel back and forth from the communities. This, he stressed, must include medical personnel.

CDC Head, Mr Craig also provided an update in which he explained that country-wide flooding is as a result of excessive rainfall over the last eight days. He explained that mostly farmlands and low-lying homes are affected.

“Since then, the Commission has been working closely with all Ten Administrative Regions to ensure that the regional response mechanism is activated and responded in a coordinated manner with all the programme heads, the departments, the units, the fire, the military, working together to respond to this current situation,” Craig said.

Relief supplies inclusive of food and cleaning hampers have been provided to the most vulnerable and affected communities.

He stressed that the CDC will remain on the ground to ensure that the immediate needs of residents are met.

“We have an inter-agency team where we have the National Drainage and Irrigation Authority, the Ministry of Health and Regional Democratic Council all working together.”

He added that residents can acquirement more information by calling the CDC on 600 7500.