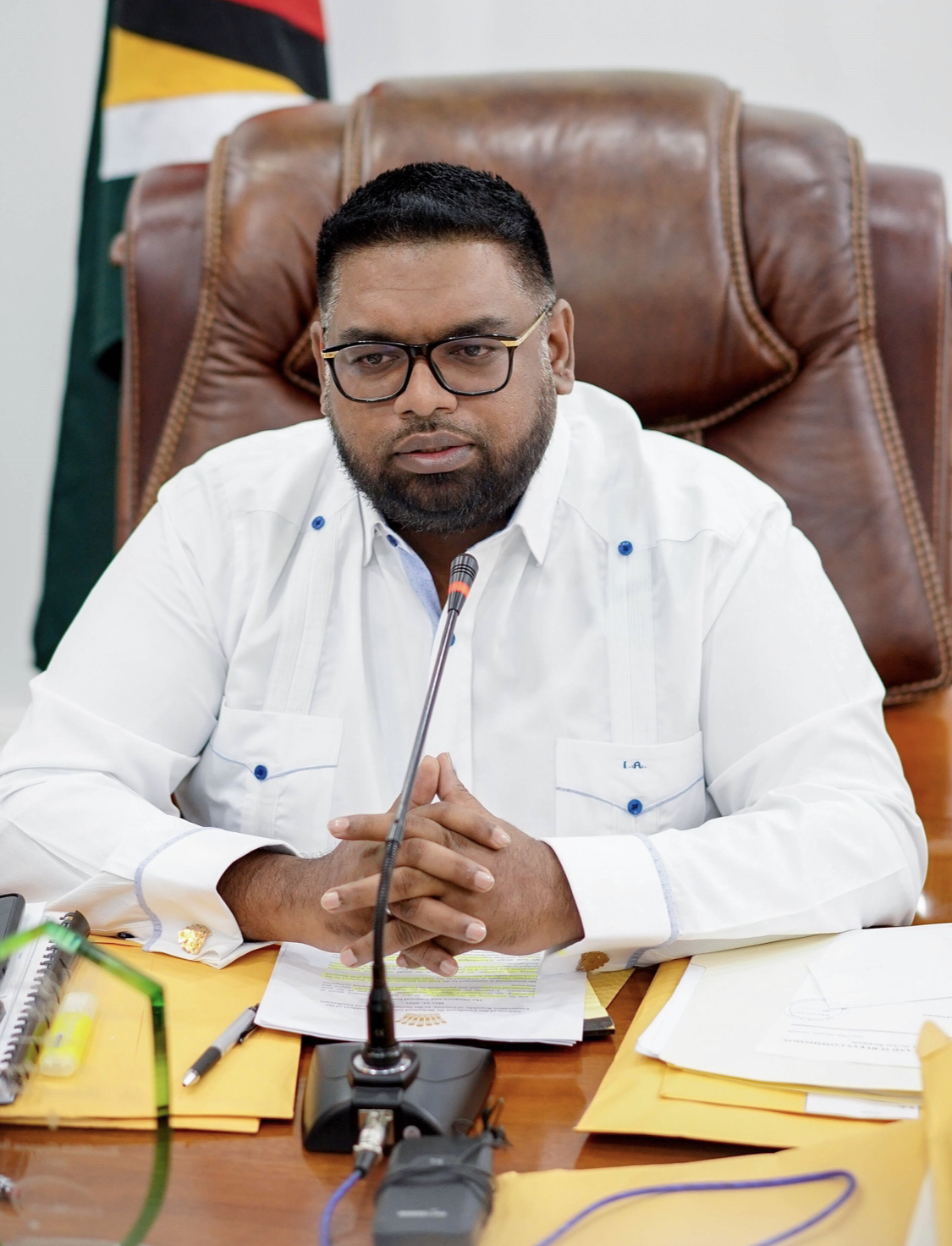 Georgetown, Guyana (May 22, 2021) His Excellency Dr Irfaan Ali assured overseas-based Guyanese today that his Government remains committed to Diaspora engagements and is vigorously pursuing policies and plans to ensure that they are integrally involved in the process.

The Head of State made this assertion during his address to the inaugural Virtual Diaspora Conference which was held under the theme “A New Era of Engagement for the Guyanese Diaspora”. More than 500 overseas-based Guyanese participated in the three-hour-long discussion.

The President told the gathering that it is essential to have a two-way communication process to ensure the viability and longevity of the proposed plans and opportunities available in the country.

“We would like feedback on how we can ensure that not only the Diaspora Unit but the entire strategy is developed in a way that makes it sustainable, workable; ensuring that the plan and outputs can be realised. And this is critical for me because we have to get this right from the start.”

In emphasising the importance of the Diaspora in helping to build a better Guyana, the President referred to their pro-democratic stance in the 2020 elections and remittance support over the years.

“Your role in securing our democratic values, your role in securing the rule of law cannot go understated. I want to take this opportunity to thank all of you sincerely for your interest, your time, your dedication, and your commitment. Indeed, during very difficult times, it is remittances and the contribution of the Diaspora that saw many Guyanese breaking the barriers of extreme poverty. It is the remittances of Guyanese in the Diaspora that contributed significantly to the eradication of many social problems. It is your commitment over the years that have helped us during many difficult times,” the
President stated.

He charged the Diaspora to use their influence, finances and expertise to help develop the country and the lives of their fellow Guyanese.

“As we navigate into the future, we would like the hands of the Diaspora to be a key element in the new Guyana that will bring with it great opportunities, great prosperity…. The unification and coming together of the Guyanese people is paramount to the prosperity we will achieve.”

PILLARS AND PRINCIPLES OF DIASPORA ENGAGEMENT

The President pointed to five important pillars of the Diaspora: influence, investment, information, identity, and integration. He said that “in each of these pillars, we have seen how important the Diaspora can be.”

He added that the forum and the Diaspora Unit provide a platform to integrate the Diaspora and link the ‘powerful asset’ that they represent with the development pathway of the country. It also provided the platform to separate the real information from the misinformation.

The Head of State noted that the Diaspora Unit and the way it supports development and integration must further be founded on the principles of coordination, participation and facilitation.

He pointed to the response of the Diaspora following the eruption of the volcano in St Vincent and the Grenadines as a perfect example of how the output of the three principles led to a positive outcome.

“And at its very early stage, we are seeing the impact of the unit in facilitating, coordinating and participating with St Vincent and the Grenadines in dealing with the aftermath of the volcano. Guyana indeed has a Diaspora in St Vincent and the Grenadines, and the Diaspora Unit from a very early stage…was able to engage and connect with the Guyanese community and the leadership of that country.”

The President elaborated on the plans moving forward and pointed to the importance of democratic values—which he said will be guarded vigorously.  As important, will be the rule of law and the active involvement and participation of Guyanese.

In this regard, he acknowledged that key areas need to and will be addressed, including access to healthcare, education, security, infrastructure, and access to affordable and reliable energy.

“We’re talking about world-class education and health systems for all Guyanese, and included in that too are plans and a strategy for investment that would see healthcare services for members of the Diaspora too…”

He revealed that work has already commenced on a comprehensive strategy to address security, as this is an important factor in the Diaspora’s decision-making process.

MORE THAN OIL AND GAS

President Ali urged those present to move away from the misguided notion and “narrow narrative” of where Guyana is heading and realise that the excitement is not only about oil and gas. He elaborated on several innovative and transformative plans ahead in key areas, including agriculture, the environment and eco-tourism.

“Yes, oil and gas will give us a massive push, but we are planning, much, much bigger than oil and gas. We are planning to be the leader, regionally, in food sustainability and agricultural production. And we have an entire strategy. We have recently assumed once again the leadership on agriculture in the region.”

He pointed to the Jagdeo Initiative on Agriculture. The goal, he explained, is for Guyana to become not only a full supplier of our own food but a net exporter regionally. President Ali said that he is confident that the Government will provide the incentives to support this drive.

Environmental leadership is another important aspect of the Government’s agenda moving forward and, the President disclosed that the Vice President, Dr Bharrat Jagdeo is already engaging not only Norway, but many other multilateral development partners in pursuit of this goal.

Additionally, the President stressed the importance of making informed decisions that match the country’s development agenda.  An example of such is the idea of moving the support services for oil and gas to Guyana and not wanting to open up the necessary lands along the Demerara River to create opportunities for those investments.

He guaranteed that his PPP/C Government will pursue the creation of 50,000 jobs, as it committed to in its manifesto, the provision of 50,000 house lots, the facilitation of foreign direct investment, the provision of 20,000 scholarships and having a competitive oil and gas support infrastructure in Guyana to provide employment.

“We are in pursuit of these goals. And they’re not fly-by-night objectives of the Government. We campaigned on these. We asked the Guyanese people to support us on this, on these projects and this vision, and we have a responsibility to execute.”

He pointed to the importance of the Diaspora in also taking advantage of the opportunities ahead and encouraged them to participate in the process as the future of Guyana depends on their skills, experience and their investment.

“Importantly, these attributes must be driven by a vision and ideas, and today gives us an opportunity to engage in that vision and those ideas that will fuel the future of Guyana.”

After the keynote address, President Ali and Vice President Jagdeo fielded questions from the participants in several areas, including access to education, agriculture, the natural resources sector and women’s empowerment.

When asked about the systems that will be put in place to address the unemployment of youths and school drop-outs, President Ali explained that the Government is developing a system to harness the best potential of each individual. This system, he said, will focus on the expansion of technical and vocational education that will be integrated into the secondary school system.

“What we are doing now is developing community learning facilities. And these community facilities are linked to the programmes of Government. So in the housing programme now we have many of these young persons who are trained in block making, not only trained but also given seed capital to start up the operations from a community level.”

Vice President Jagdeo added that the Government is opening up several service-type opportunities. In addition, it is co-sponsoring the training of young people and has introduced apprenticeship programmes through the heavily-invested Board of Industrial Training (BIT).

The Vice President pointed out that as it relates to the Diaspora getting involved in the education sector, the Government has already incentivised investments into the private education system by removing corporate tax on education at every level—this it achieved within the first 30 days of assuming office.

In answering a question about job security for skilled members of the Diaspora, who are interested in taking up positions in the Government, President Ali emphasised that professionals and public servants have nothing to worry about or fear.

In addressing women’s empowerment, President Ali stressed that the Government takes responsibility for the removal of barriers in society that inhibits the participation of women and girls very seriously.

“We started to change legislatively, the role of women and girls in policymaking, in decision making and in Government. We have seen over the years greater and greater participation at every level, at the level of policy or level of management in the private sector itself, and now the universities.”

One of the participants also raised the issue of the availability of lands to members of the Diaspora who meet the criteria.

Both President Ali and Vice President Jagdeo said that the allocation and sale of lands will be market-driven.

“The land will be available, but it is not going to be free land in those areas. It will be closer to market price because we use resources from the sale of those lands to cross-subsidise low-income housing, middle-income housing, and so on,” President Ali said.

Lastly, the two senior Government officials were questioned on the Sovereign Wealth Fund and what model would be used to guide its development.

The Head of State explained that in addition to the Norway Model, various other models are being examined, notably the Kazakhstan Model.

“We are in dire need of transformation in the health sector, in the education sector, in the energy sector. And we have to create the framework for the expansion of these and other important sectors that will bring jobs and create the platform through which our country will evolve into the future, and through which these funds can be modelled, and that is the stage we are in now in Guyana.”

Moving forward, the President noted that the drive is to enhance the lives of all Guyanese.