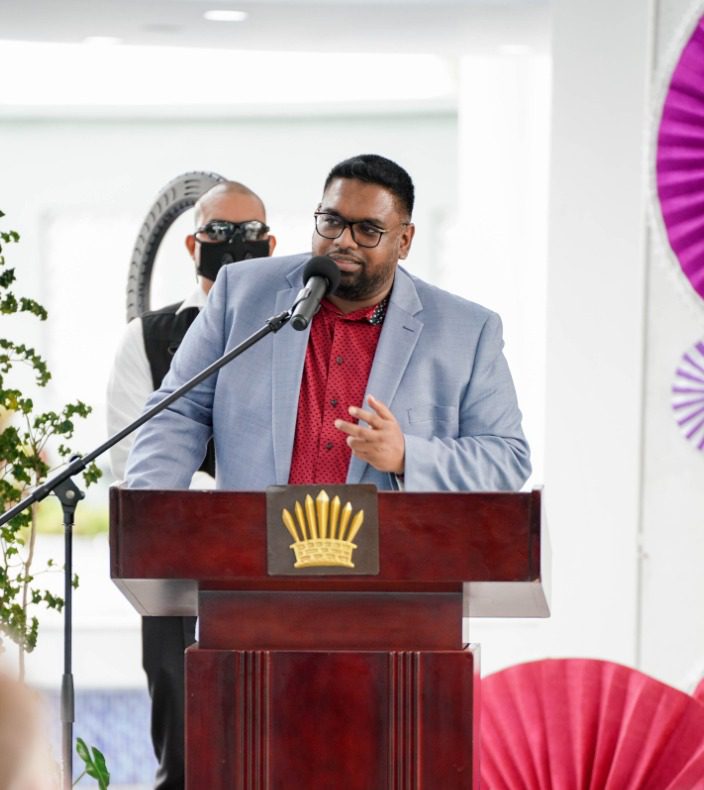 His Excellency Dr Irfaan Ali today announced that as a result of Government’s investments, a mere nine months after assuming office, a stream of opportunities have already been created for Guyanese across all sections of society.

The Head of State was at the time expounding on the investments made in various sectors and the creation of jobs as well as the opening up of opportunities for citizens during a press conference earlier today.

“These investments create a string of opportunities for different layers in our society. That is why these expenditures are so critical in not only opening up of opportunities, but creating immediate benefits.”

The President explained that key and critical investments have already been made in various sectors of the economy including housing and construction, agriculture, infrastructure, mining and forestry among others.

INVESTMENT PORTFOLIO OF $15B IN HOUSING

“The extraordinary demand in the construction boom has required the importation of an estimated 40% percent of the demand at an approximate value of US$10M. We can produce this locally.  Our accelerated housing programme, massive highways and community roads to be developed, will increase our demands three-fold over the next five years. In order to maximise local benefit, thus creating jobs and expanding local content, we are in the process of issuing new quarrying licenses in order to fully satisfy local demand.”

He added that in the housing and construction sector, Government is well on its way to achieving the promised 50,000 house-lots, and have already completed 4000 within its first nine months in office.

The President said too that the investment portfolio of $15B in housing has seen a drop in Low Income interest rates; an increase in the loan ceiling from $12M to $15M and an increase in the mortgage relief threshold from $15M to $30M.

$39B INJECTION INTO PUBLIC WORKS

According to the Head of State, the budgeted $39B for roads under Public Works, excluding the four lane highways along the East Bank and East Coast corridors, has created opportunities for more local participation. He gave examples of requirements, including 28,000 truckloads of sand and loam and 600,000 tonnes of quarrying material.

To boost the mining sector, in addition to the budgetary allocation, President Ali disclosed that GGMC will invest $2.7B to maintain approximately 1500km of hinterland roads, repair 40 culverts and build 20 long bridges.

He divulged too that he has also tasked the Ministry of Public Works to complete a condition audit of all bridges along the Linden to Lethem road. The Ministry will further design and cost each bridge which will be built in concrete to international standards. These costs will be included in Government expenditure.

“This no doubt will add to the realisation of our 50,000 jobs promised. It is expected that by the end of this week, the nine prequalified bidders for the new Demerara Harbour Bridge, will be invited to tender. We expect the bridge to be completed and delivered within 24 months from the commencement of its construction.”

The Ministries of Public Works of Guyana and Suriname, according to the President, are currently in the process of procuring consultancy services for the feasibility and design of the Corentyne River Bridge.

President Ali also reiterated his Government’s commitment to Guyana’s indigenous community. In an effort to boost food production, he said close to $1B has been invested in Hinterland agriculture development and close to $2B invested in grants to village councils for income generating projects.

The Government has also recommenced the CSO programme with more than 1900 Amerindian youths attached to Amerindian villages.

He also pointed to key investments in the other sectors, including a $380M investment to boost Swamp Shrimp production.

“Look at the aquaculture industry and what is being done there, very simple, innovative things… the swamp shrimp from Berbice has a natural market in the Diaspora; we have set aside close to $380M to develop that industry that would increase production by almost 300 percent to enter into that new market.”

President Ali stressed that while jobs creation is paramount; keeping track of the jobs created is of great importance to him as well. On this note, he announced that a formal data collection system is being put in place to serve this purpose.

He said too that the private sector now has to also add their input into the number of jobs already created including in the expansion of shore bases.